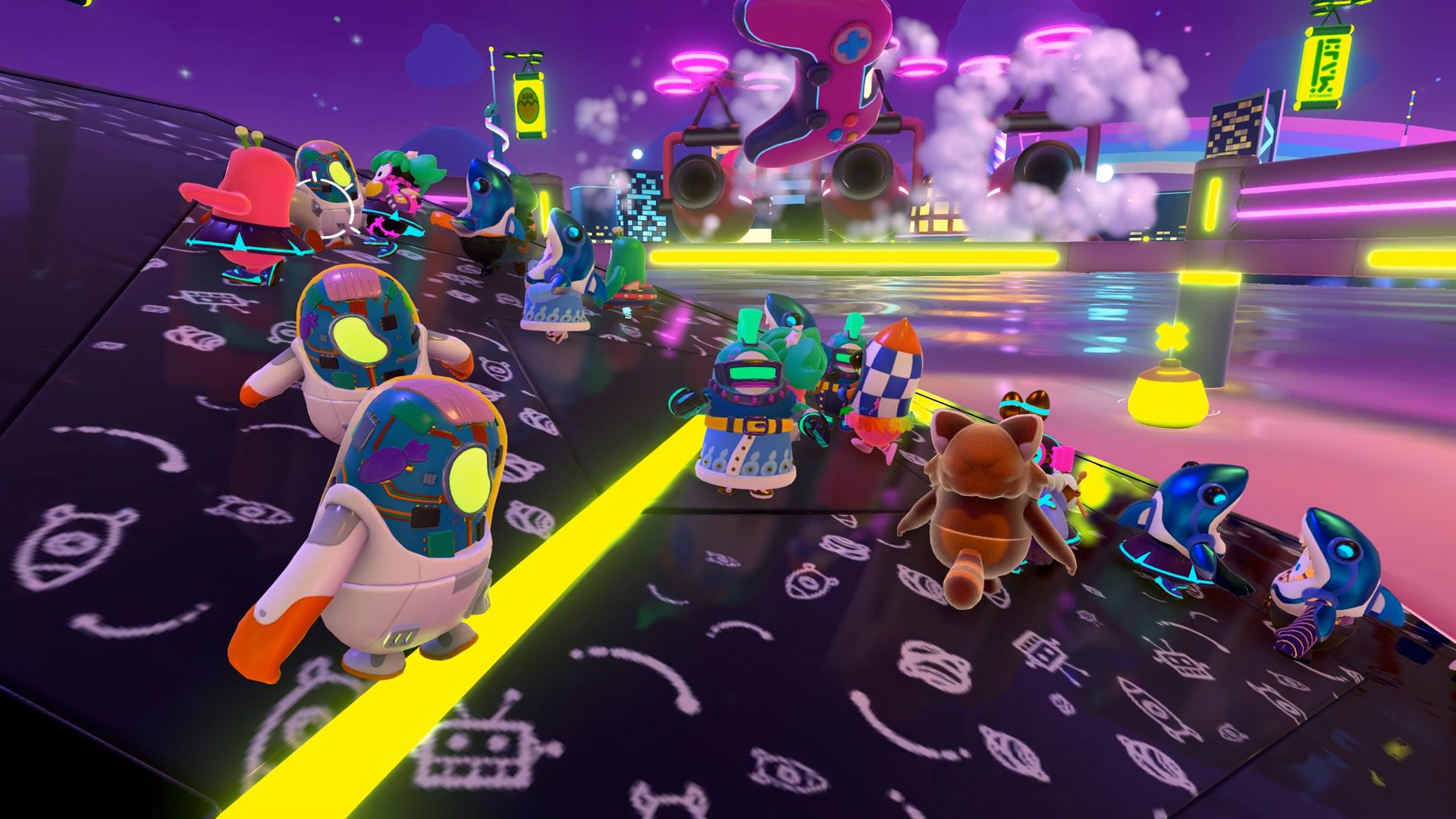 Hi there. My name's Randy. I'm the father of an 11-year-old. That means I know what's happening in the world of Fall Guys: Ultimate Knockout. Today launched season 4 of the adorable little bean dudes' astronomical rise into battle royales. Four seasons already? That's crazy. The game only launched in February 2020 so...oh, okay, well it does sound like their seasons are on track then.

While the real world has entered Spring, Fall Guys' season enters a disco inferno. The frantic and unshakable theme song takes on a dancehall rhythm, the costumes are equal parts neonpunk and disco robo. Pinball pins slap everyone around, Pogo Ball-looking Saturns fly through the sky, and there are enough laser light shows to add an epilepsy warning to the front end of the loading screens.

It's more than just cosmetic, though. Fall Guys Season 4 is all about #SquadGoals, where you're randomly teamed up with three other jelly boys, and you all win or lose together, even during the normally single-player races. The good news is that you can all win together, too, spreading that crown around to four winners instead of just one.

New Feature: Squads Mode. Qualify together as a Squad of 4, with your whole Squad claiming victory if any of you win the final Round.

New Round Type: Squad Race. Score points for your Squad by crossing the finish line—the higher your position, the more points you earn. The lowest scoring Squads get eliminated, so every Squad player’s performance matters.

New Round Type: Squad Survival. Stay out of that slime and earn precious points for your Squad. The lowest scoring Squad gets eliminated, so feel free to target opponents and throw them off their game.

New Feature: Daily Challenges. Eager beans can log in each day to receive new Challenges to complete, with the opportunity to earn bundles of Fame and Crown Shards.

New Currency: Crown Shards. Earn 60 Crown Shards to transform them into a shiny new Crown. Collect Shards through Challenges and Squads, and check your balance in the Show Selector screen.

That all seems like a lot, right? I played around with Fall Guys when it first launched, but it's mostly been my daughter gleefully running her race against 59 other beans, or playing goalie with twin soccer balls flying around the court, or whatever. She is never happier than when a new season of Fall Guys hits, which makes me happy, too. Because when she gets tired of this season, she's going back to overly modded Skyrim, and vanilla dad can only take so much of those shenanigans. But bean dudes' shenanigans? I can watch a few rounds of that.