Hints and tips for your first few hours in Loop Hero 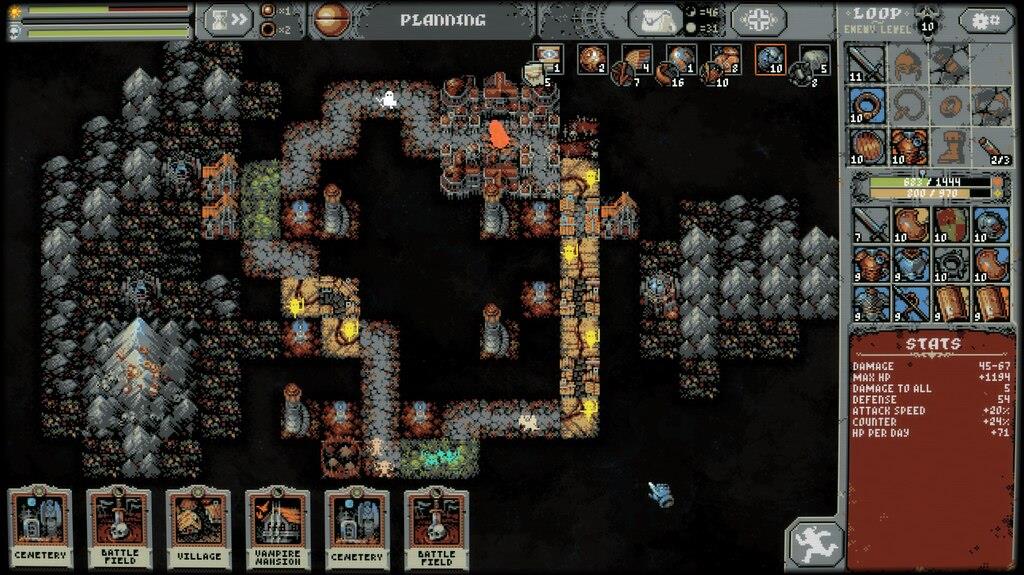 I've been playing Loop Hero, a breakaway indie hit stemming from the roguelite genre. There is auto-battler combat, levels of loot, tile-based world assembly, deck building—there's a lot going on. Yet its blend of real-time and turn-based strategies seemingly melt away the hours. I haven't made it to bed at a reasonable time for a week now.

Intentionally or not, there are a lot of things Loop Hero doesn't tell you at first, or at least doesn't make blatantly obvious. While one of the fundamentals of roguelite games is "learning through failure," and among the best ones by "failing upward," I wanted to throw together some easy tips and tricks that will help out your early game.

2. Place the meadows next to something

The other common tile card you get are meadows. They give you hit points, too. They don't do much alone, however. Place meadows squarely adjacent to something—anything—and they becoming blooming meadows. This multiplies their effectiveness.

4. An item's level isn't its only measure of usefulness

Just because a sword, shield, ring, or armor is higher level, doesn't automatically make it better. A piece of equipment's special abilities may be worth more in a fight. For instance, you might receive a level 6 sword that does 30-35 damage. Not bad! You're currently equipped with a level 5 sword that only does 25-30 damage but also gives you +20% attack speed. In this case, hitting just a little faster might be better than hitting just a little harder. You'll have to do the math.

5. It takes about three days to make a full loop

The day's "clock" (a sun meter, of sorts) is in the upper left hand side of the screen. It takes about three days to travel around the loop once, bringing you back to camp. Tiles that spawn enemies will tell you how often they spawn, and they all spawn according to some fraction of how many days have passed. If it spawns one enemy every three days, you'll likely only see one of them the next time you come around. If it says it spawns one enemy each day, that means you'll have to fight three of them the next time you loop back around to that enemy's tile.

6. Slow down—don't play enemy tiles the moment you get them

Playing every enemy-spawning tile you receive will likely overwhelm your hero. It's tempting to build out the world as much as possible. It's tempting to want to fight more things so they drop more loot. But you're walking a fine line here. You want to give yourself enough of a challenge in order to collect good loot, but not so much of a challenge that you will die if you set out around that loop one more time. You have an unusual amount of control over Loop Hero's ramping difficulty level.

Go into the menus and select the option that pauses you at camp after completing a full loop. After several trips around the loop, the map will be getting busy, and there will be a lot more moving parts. Your flat-white-colored hero can, surprisingly, get lost in the shuffle. Before you know it, you've made a full loop but were looking elsewhere and now your hero has set off into the wilds again. You regain only a percentage of your maximum hit points. On a good run, that might top you off back to 100%. If you just had a bad run, you might be looking at only 50% of your hit points being refilled. Look ahead at the board. Will you actually survive another loop?

8. Retreating is half the battle

You're going to go around the loop many, many times. The majority of your first runs aren't going to let you reach the boss fight at the end of the level. If you "retreat" at the beginning of a loop, when you're standing back on your home camp's tile, you keep 100% of the resources you've earned for this run. But if you die out there in the loop, you'll retreat with only 1/3 of what you collected. It won't even occur to you at first, until you realize you've done several rounds of Loop Hero and still haven't brought home enough goods to actually upgrade anything in your camp yet. Know when to hold 'em. Know when to fold 'em.

Hopefully some of these tips ease you into your first few times around the loop. Again, while Loop Hero's gameplay philosophy is "learning by doing," these are a few things that aren't necessarily worth screwing up over and over just to grasp the basics of. And half fun out there. It took me two or three full hours for it to open my eyes, but it's opened my eyes to a genre I've never given a fair shake to. Loop Hero is legit.