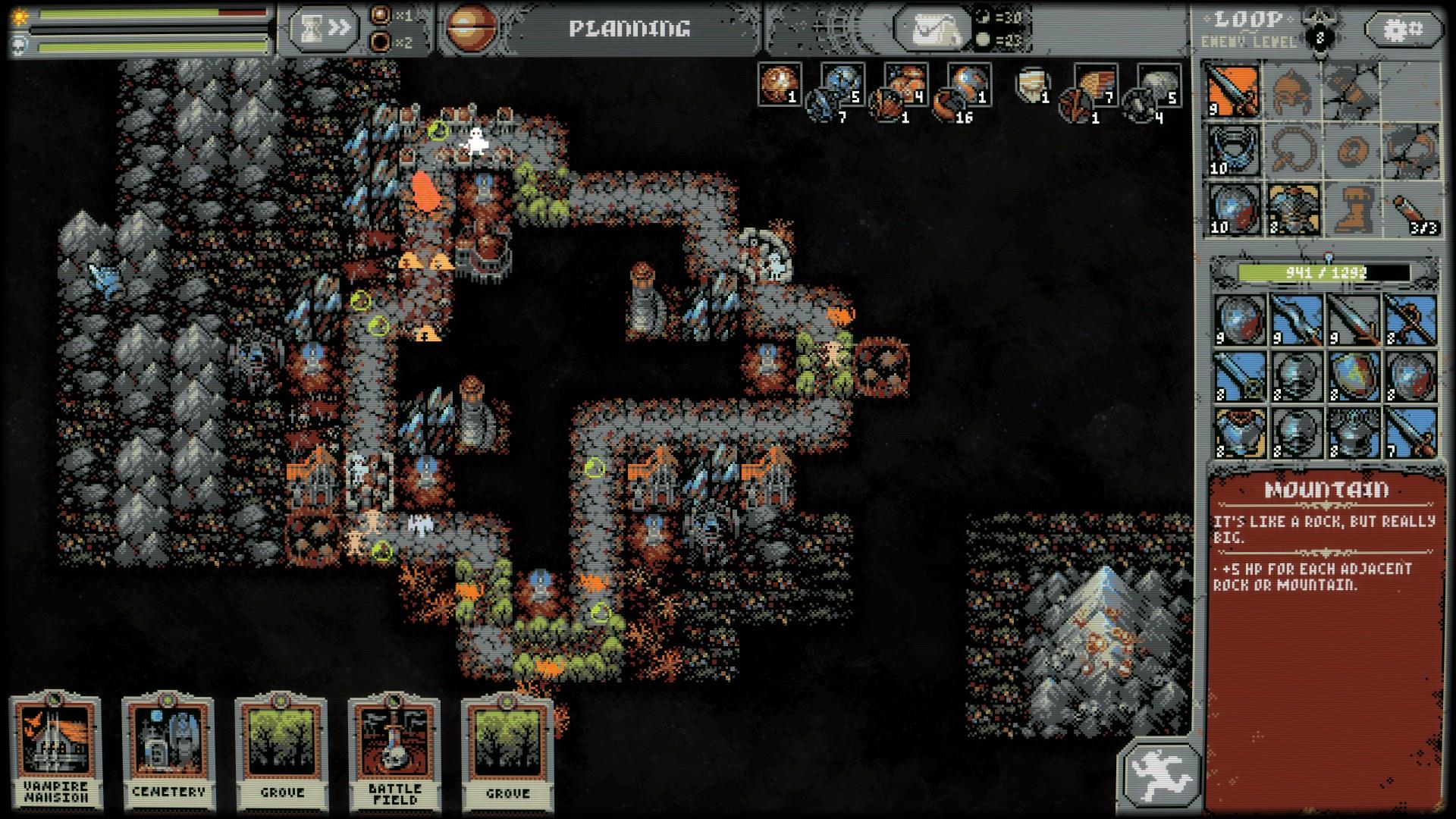 You have a good run going. This is the one. This is the round that brings home the bacon, puts bread on the table, does...some other food-related idiom. But for as good as this round of Loop Hero is going for you, your next misstep could be right around the corner.

The latest indie runaway hit on Steam is Four Quarters' Loop Hero. I'd seen Devolver's name listed as publishers, and that's usually enough to make me take a second look. Except this time it wasn't. I don't know. It was something about the sparse-looking art style that wasn't pulling me in like it usually does for Devolver games. Why yes, I'm a fan of pixel art. And yes, I love retro stylings with a modern twist.

But have you seen the screenshots? They're not great. Sure, each individual element looks fine, I guess. That's a pixelated mountain. There's a pixelated house. Check it out, a pixelated skeleton, I suppose. Looks-wise, let's be honest, this is one of the least photogenic games I've taken on for review.

If not for the shadow that creeps into each character portrait. If not for the inky blackness that fills the void between Loop Hero's seemingly disparate features. Really there was something here. I just had to find it. So, I've taken it on for review. The full review is coming, but I had to just bring you some gameplay.

There's a momentum to this deck-building, rogue-lite, role-playing adventure game that I find unstoppable. Not just because your hero jaunts forward, ever on that looping path, with only calculated pauses between. Not just because it handles your encounters autobattler-style, fills up your inventory until it pushes the little stuff out, or spawns enemies automatically with the dawning of each new day.

It's the series of interesting choices that go into each piece of Loop Hero's puzzle. It's the world you're building, tile by tile. It's the enemies you are summoning, spawnpoint by spawnpoint. It's the resources filling up your knapsack that build up your camp. It's the equipment stats that inform every number popping off your enemies, every counter or evasion you slip past, every attack you tank. And it's every character you meet, both good and bad, both inside and outside of your home base.

No, Loop Hero ain't a looker. But it builds into something beautiful during your own playthroughs. Until it's not the rat men or the bandits that are ugly. It's not the vampire mansions and graveyards that are ugly. The only thing that's ugly is having to retreat, start another new run, and stare at that empty, surrounding blackness that you have to fill in again, brick by brick.

But that momentum kicks in. I now understand that the measure of a good roguelike isn't found in death. It's found in how many times it makes you want to get back out there again. And again. And Loop Hero? It's so good that it's singlehandedly opened up the door to this rogue-lite run-based genre that's been closed to me all these years. I wouldn't say that Loop Hero "ruined" every other roguelike out there for me. But it certainly makes me wonder what all those others were missing.