iam8bit in a collaboration with Panic and House House has announced that starting today, Untitled Goose Game will be available in physical form on the Nintendo Switch and PlayStation 4 at retailers around the world. The standard edition of the game will include the game cartridge/disc, a Spring/Summer edition of the Plaza Catalogue which is a 24-page retail catalogue that features useful items a goose might enjoy collecting, an 11" x 17" village map poster, and an extra sticky official "No Goose" sticker. In addition, the "Lovely Edition", which is exclusive to iam8bit, will also have a few environmentally friendly additions including a 100% recyclable booklet and foldout poster (and the switch version's outer sheet as well), a sugar-based, non-toxic, no-vinyl sticker pack-in, and eco-friendly Biolefin shrink wrap. Finally, friends can now play together with with a local two player co-op mode that will be available as a free update to all players. 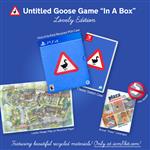 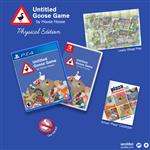 iam8bit, in collaboration with Panic and House House, with distribution by Skybound Games, today announced that Untitled Goose Game’s first-ever physical boxed editions for Nintendo Switch and PlayStation 4 are available starting today at retailers around the globe. Also, the “Lovely Edition,” an iam8bit exclusive version with premium recycled materials, is now available on iam8bit.com.

?       Game cartridge/disc for either Switch or PlayStation 4

?       Spring/Summer edition of the Plaza Catalogue: a 24-page retail catalogue featuring useful items and objects that a goose might enjoy collecting

?  The iam8bit exclusive “Lovely Edition” of Untitled Goose Game (Switch $39.99; PlayStation 4 $34.99) features all of the above collectible goodies with an environmentally friendly twist:

Untitled Goose Game, from Australian game developer House House, lets players become a goose-on-the-loose in an unsuspecting village. Players make their way around town, from peoples’ back gardens to the high street shops to the village green, setting up pranks, stealing hats, honking a lot, and generally ruining everyone’s day. The game now features a local two-player mode with, yes, two mischievous geese, that just launched via free update for all players on September 23rd.

Untitled Goose Game has received multiple awards since 2019 including recognition from BAFTA and the Golden Joystick Awards, as well as “Game of the Year” accolades in the Game Developers Choice Awards and 23rd Annual D.I.C.E. Awards. To date the digital version of the game, which originally released in September 2019, has sold over one million copies.

Founded in 2005 and celebrating its 15-year anniversary, iam8bit is a creative production emporium that has quietly redefined the entertainment industry, time and time again. Collaborating with a plethora of partners and narrative-busting IPs, iam8bit punctuates the importance of engaging with fans directly. By creating the videogame industry's very first community events, the company injected the idea of experiential immersion into game and film marketing (back when it was simply known as "theatre"). iam8bit also played a crucial role in the vinyl renaissance, minting its first record in 2010. The company is based in Los Angeles and co-owned by Jon M. Gibson and Amanda White. For more information, please visit www.iam8bit.com, or Twitter, Instagram or Facebook.

Panic is an ancient corporation in Portland, Oregon that relentlessly follows its heart in an effort to make nicely made things that bring everyday joy. Originally — and still — a Mac app developer, Panic has also become a highly-focused video game publisher, and, somehow, is developing a new handheld video game system from scratch. Publishing Untitled Goose Game remains an absolute highlight of its time on this planet.

House House is a videogame company from Melbourne, Australia. They are the creators of Push Me Pull You (2016) and Untitled Goose Game (2019). House House can be found on Twitter and their website.