I'm not entirely relying on video games to cheer me up during the pandemic, but if I'm being honest, I am definitely gravitating towards bright, cheery experiences and eschewing darker, gloomier games. There are enough clouds in the world; I'm looking for digital rays of sunshine. This is why I immediately took to Super Bomberman R Online when I fired it up last night.

Part of September's Free with Pro program on Stadia, Super Bomberman R Online is available for any Stadia Pro member to claim and keep right now, the latest in an increasingly impressive line of "First on Stadia" exclusives. While this does mean that Stadia's limited user base can't always populate an entire 64-player battle royale, it seems that the devs at Konami anticipated this issue, stocking the game with reasonably competent bots to fill in for real players when the game struggles to fill its roster. You can usually get into a game with a mix of real players and bots within about two minutes.

The structure is simple - you play Bomberman against four other players. When the round ends, the survivors (typically not me) move on to the next round, until you have a winner. It is an elegant implementation of battle royale mechanics, with a game that is more intuitively suited for the genre than, say, Tetris.

The enhanced edition (which everyone gets by default) comes stocked with a crew of regular bombers - but a motley crew of Konami regulars also appear in the cast. You can play Super Bomberman R Online using Alucard, Pyramid Head, even Snake makes an appearance. Each of these characters has a special power that they can use to slightly tip the odds in their favor. Snake, for example, can disappear in a cloud of smoke for a few seconds, temporarily becoming invulnerable. Pyramid Head can whack other players, racking up kills while ignoring the bombs. Some characters have shields, some have extra bombs. It's going to be well worth it for me to play enough matches to understand what each character is capable of, because right now they able to surprise the hell out of me. 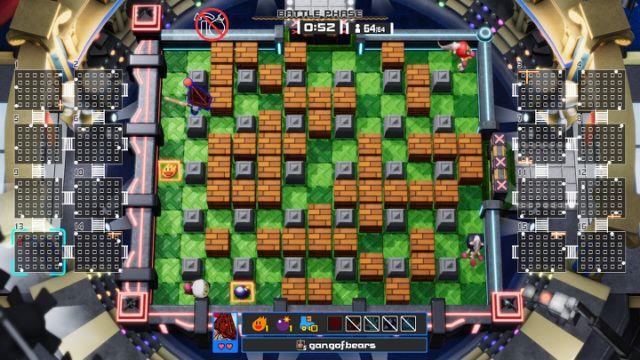 But the best part about Super Bomberman R Online is just how relentlessly cheerful it is. In some ways, it reminds me of my hated Fall Guys - just in that the games are both bright, colorful, and fun to watch. The music is bouncy, and the presentation is nothing short of fantastic-Japan-weird. I love it.

Super Bomberman R Online will likely be released on a variety of platforms before too long - the game is too good to keep confined to any single platform - and at that point the player base will explode, making the current bot situation disappear. But for now, Stadia fans have this game all to themselves, and they would be wise to grab a copy now while it is free. Super Bomberman R Online is likely to give them a few laughs and smiles in a time when we could all use them.