Today, NVIDIA has a few nice little announcements capped off with the announcement of three new video cards. But first, they highlighted some new games using RTX and detailed some tools that can help streamers.

Fortnite is getting RTX features. Yes, Epic’s massive battle royale is getting ray tracing and DLSS 2.0. While the game’s a little cartoony,  RTX is expected to make the game look a lot better and DLSS 2.0 will help give you a performance boost without sacrificing image quality. Death Stranding does a great job at demonstrating DLSS 2.0 and how well it works. Fortnite’s going to look pretty cool with ray-traced reflections, global illumination, better shadows, and ambient occlusion. The video shows off how much better the characters, water, and reflective surfaces look. The patch should be out later this year.

NVIDIA Broadcast leverages AI to help you produce streaming at a high level. Noise removal removes ambient sound to make it so your voice is what’s streamed. If you have used RTX Voice, it’s that technology and having used it currently in meetings, it’s a pretty solid piece of software.

Background effects is nothing new and NVIDIA’s doing it without a green screen. While it’s not as clean as if you did have one, it looks really close. I can still see some anomalies here and there on edges like with chairs, but it looks solid. It’s definitely better than something like Microsoft Team’s implementation, but I think the effectiveness of this will depend on what’s around your streaming environment.

The marbles at night demo that wowed people was shown at higher resolution and higher frame rate because of the power of Ampere. It was essentially 4X better and it showed. We’re talking 1440P at 30 frames per second versions 720p and 25 frames per second on the first generation RTX architecture. The reflections looked amazingly clear on the marbles and  just seeing the light bouncing off of them as it moved was very impressive. Everything was rendered dynamically and to see something of this quality being done without pre-renders is truly incredible.

Cyberpunk 2077, yeah that game looked mighty fine with RTX allowing for incredibly detailed lighting, shadows and color. To whet your appetite before NVIDIA announced the new cards, NVIDIA showed off what the game will look like with an RTX card when the game is out this November.

Call of Duty: Black Ops Cold War will feature RTX technologies with ray tracing and DLSS 2.0 and NVIDIA showed off a new video featuring these features in play.

And finally, the new flagship is the NVIDIA GeForce RTX 3080. With Ampere, this is going to be the card for gamers to get. The new thermal design allows for 55% more airflow , 30% efficient, 3X quieter and still takes up two slots. It’s got a very clean design which I like and a large side fan on both the front and back. Air is drawn into the card from one side and flown through the other side.  With two independently control fans,  they work concurrently to cool the card. 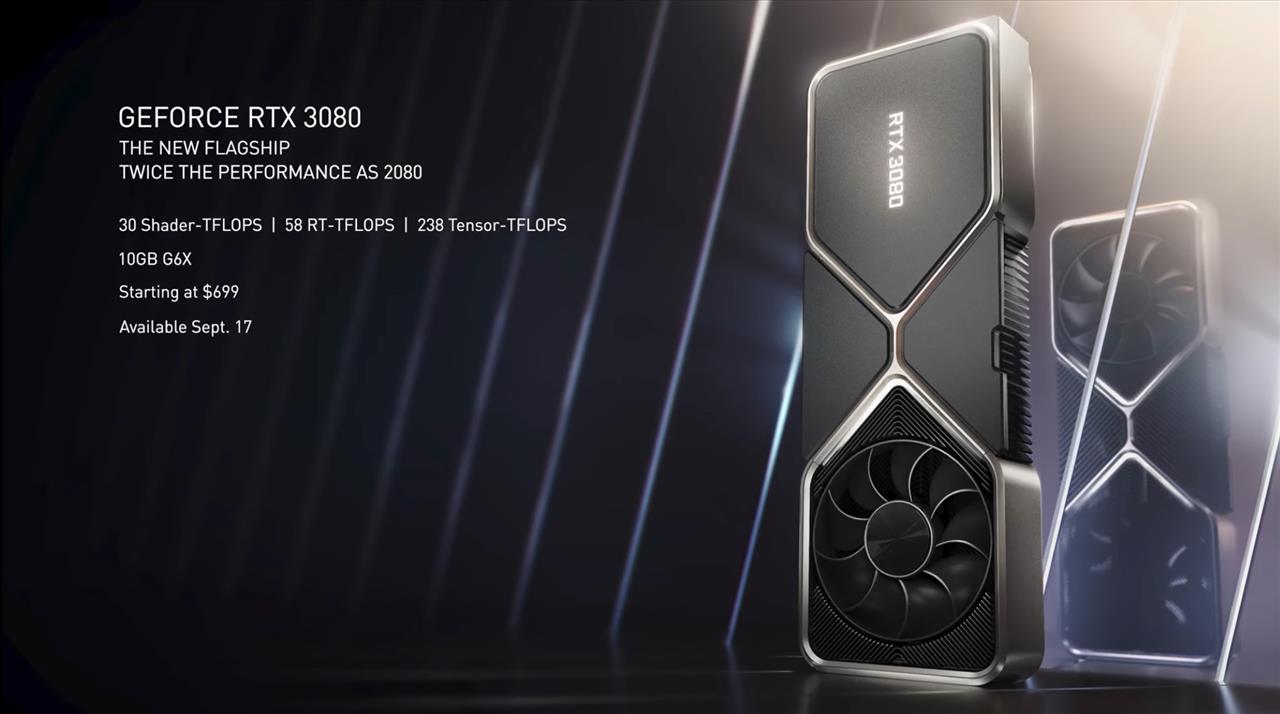 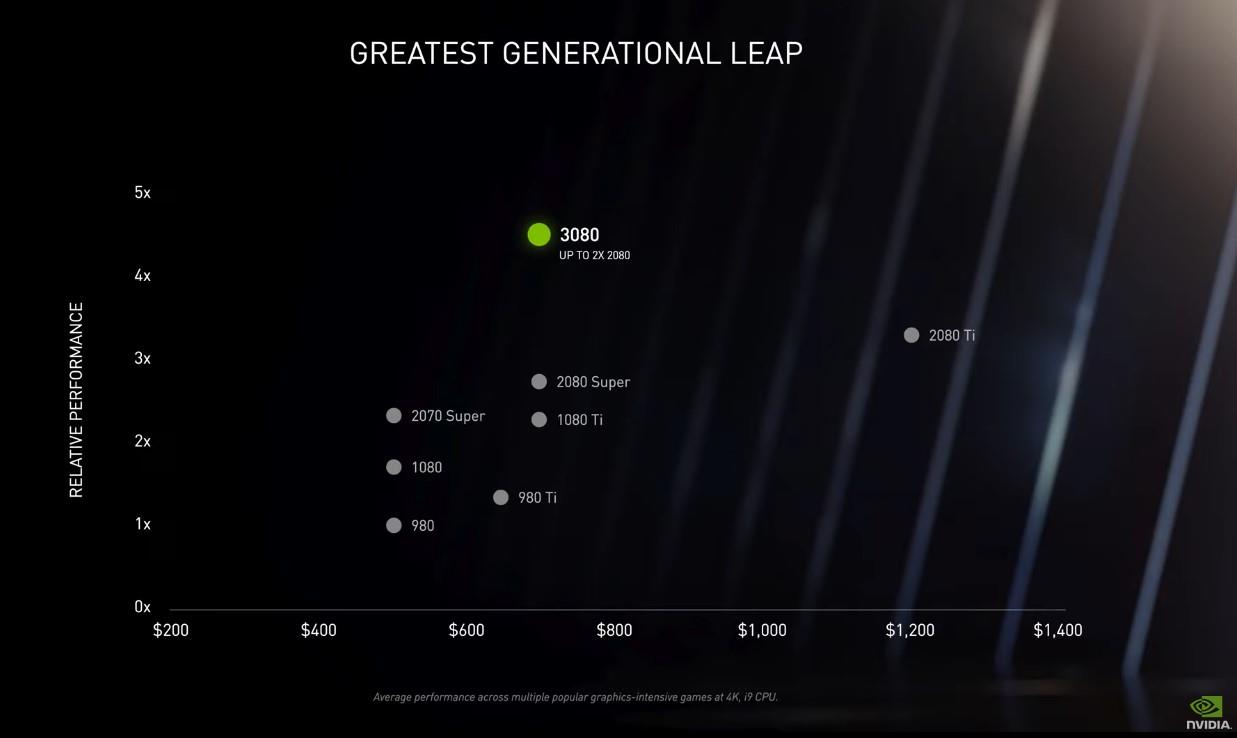 For those who want to maybe spend a little less, there’s the GeForce RTX 3070. It’s faster than the 2080 Ti as well with a cooler design featuring two same side fans we see on a few cards today. 20 Shader-TFLOPS, 40 RT-TLOPS, 163 Tensor TFLOPS, and 8GB of the older G6 memory. So not using the G6X found in the RTX 3080. Starting at $499, it will available in October and I have a feeling it’ll be a pretty popular card at this price point. 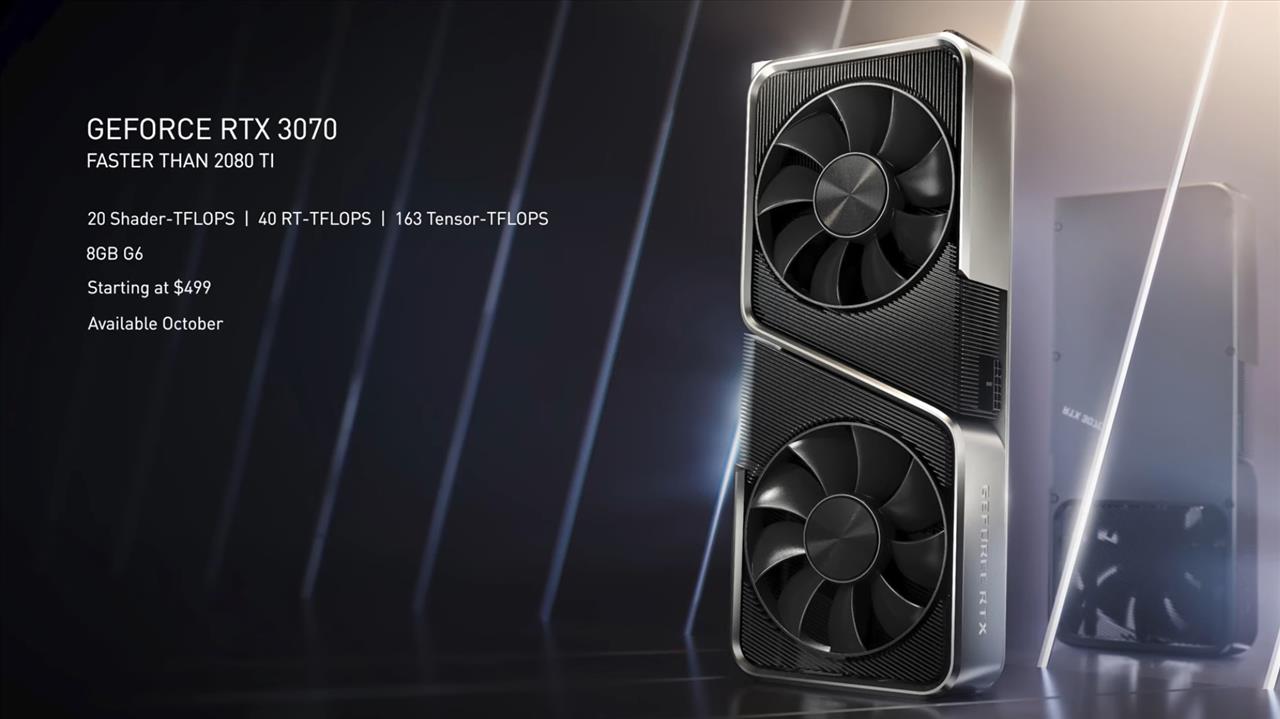 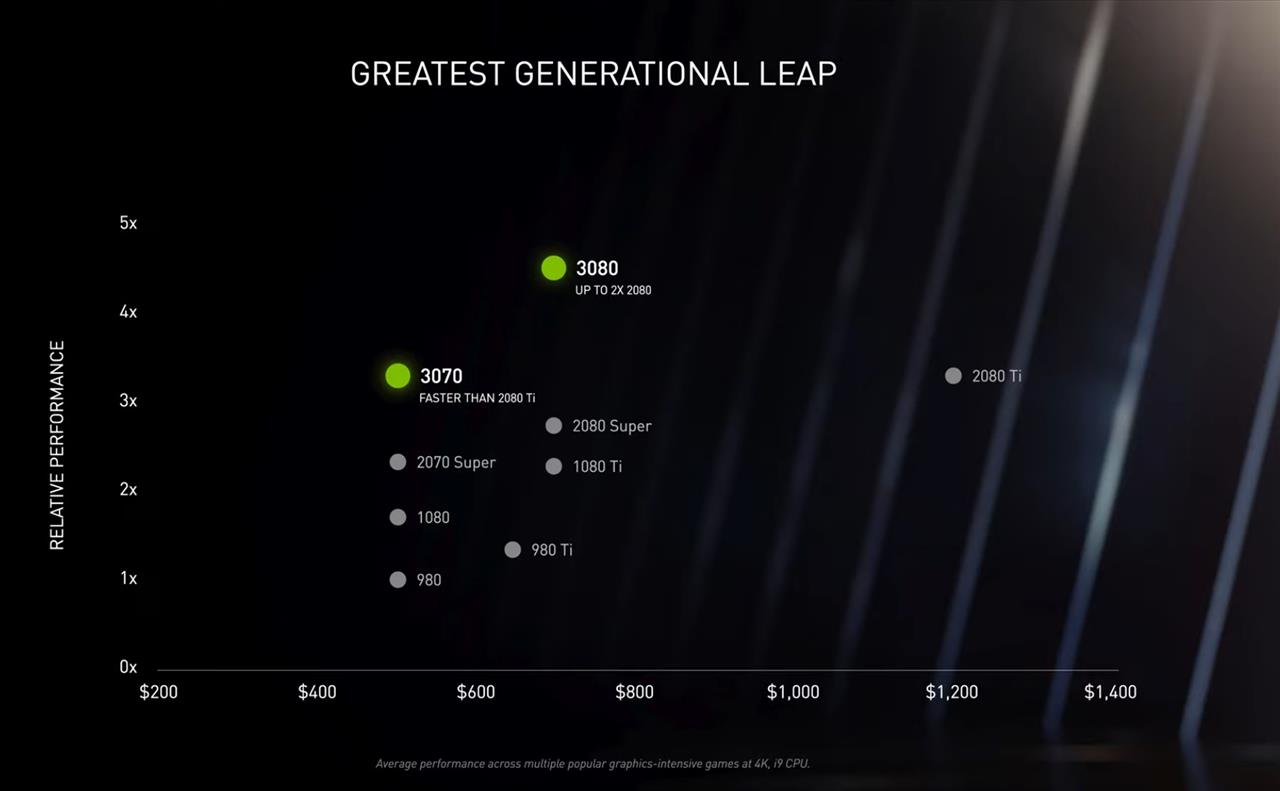 If you must have the best and have the money to spend, the GeForce RTX 3090 is the beast that you can spend it on. 36 Shader-TFLOPS, 69 RT-TFLOPS, and 28t Tensor-TFLOPS with 24GB of G6X RAM onboard. The 3-slot card features a cooling solution that’s 10X quieter and 3X cooler than the Titan RTX design. This card is so massive and powerful, NVIDIA was running games at 8K at 60 frames per second. Yeah this is a beast of a card and with NVIDIA touting 8K FPS gaming with this card, that’s just crazy, 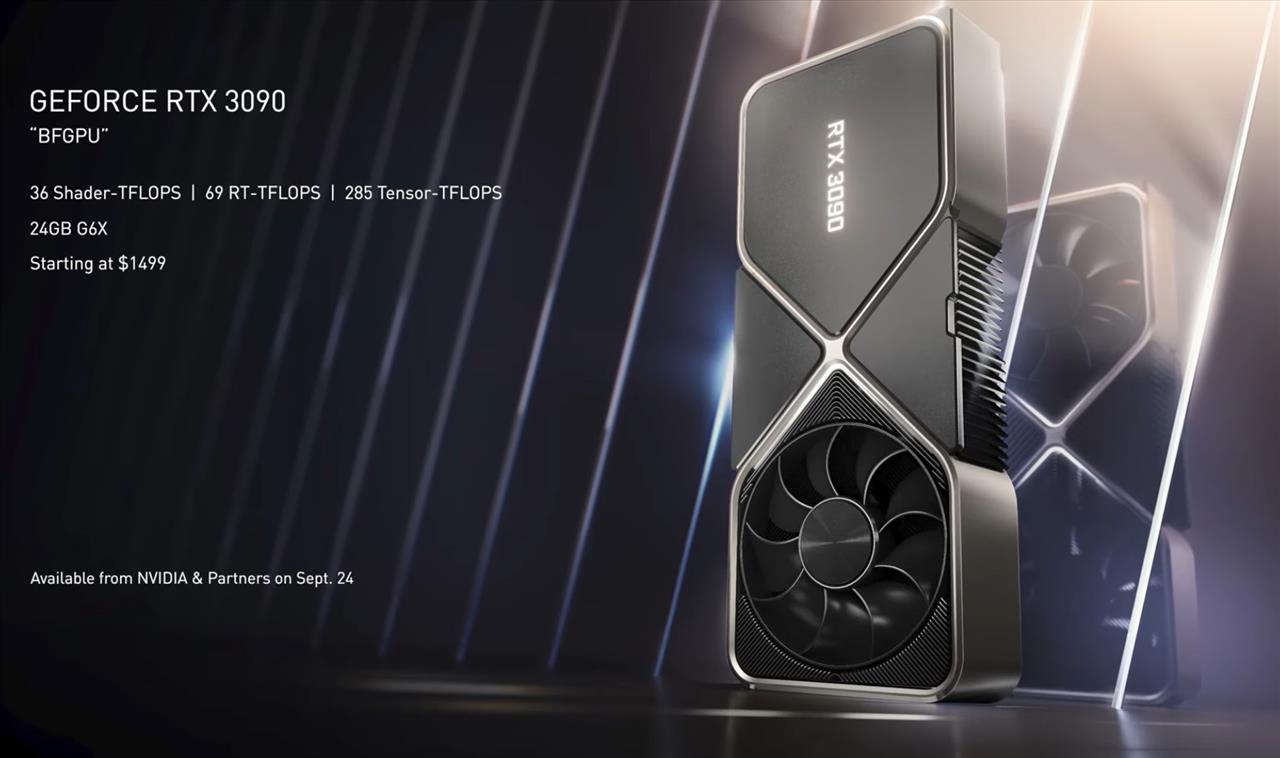 I mean, I’m pretty shocked by the pricing should the performance benchmarks match what NVIDIA says. I was expecting at least another $100 for the RTX 3080. The RTX 3070 at $499 just seems like a killer deal. Of course, we won’t know until we have the cards in our hands, but man, NVIDIA has made it pretty exciting and it’s been a while since I was this excited about video cards.