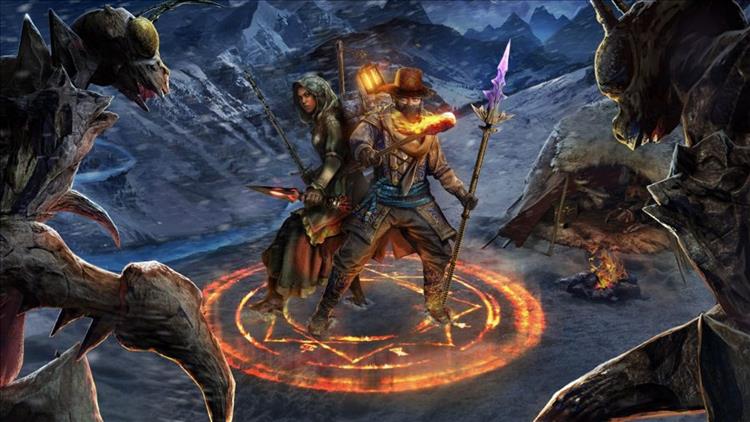 Outward is the kind of game you can nitpick from hell to breakfast. It's got that indie drip all over it, looking like it strolled right out of the early 2000's golden age of MMORPGs, glancing left and right like it's asking, "So what did I miss?"

Is that the draw? The flat architecture, the we-maybe-have-only-two-people-in-the-booth voice acting, the lack of communication between the U.I. and the player? If all of those gameplay features are true, which they pretty much are, then why am I falling in love with Outward? I've dodged the buy button for over a year now, but somehow kept gravitating towards it on Twitch.

Yesterday, I bit the bullet, adding it to my library—and I haven't looked back.

Well, in game I've looked back. As an open-world single-player or co-op survival sim with a clunky RPG framework, I almost regretted my purchase the moment I saw Tutorial on the main menu; a separate-from-gameplay tutorial. What's next, is Outward going to mail me a hard copy instruction manual? Are the game's developers going to warn me about calendars switching all the way back to 1900 when Y2K hits? (That was a very real concern back in '99, folks, I don't know if you knew.)

So there I was, not even choking down an intro cinematic yet, when I'm strolling through a heavily contrived castle with glowing red arrows on the ground leading me to glowing plaques teaching me how to put on my backpack, how to dodge roll, and how to minecraft a campfire. That's how you know when you're standing on the ledge at the deep end of the pool: when a game doesn't trust itself enough to teach you all of this while in game. I couldn't get out of there fast enough.

Everything in Outward feels just a little bit off. I'm realizing in real time, however, that that's part of its charm. It's like Outward was built in a vacuum, acting like it really hasn't played any another role-playing game in the last decade. Outward's awkward mechanics and mud-thick gameplay is the dream of the '00s.

The entire premise behind Outward—the impetus that pushes me out of the city's front gates and into the big, wide world—is that basically I owe four months' in back taxes. The city council, not to mention way too many of my neighbors, ain't havin' none of that mess. I'd be mad that every shopkeeper is handing me a two-bit fetch quest except for the fact that I really am anxious to get outside of these walls. If only the dialogue trees didn't keep kicking me out conversations prematurely. Or if they'd at least gray themselves out if I've already heard that branch of the dialogue tree. No? We're not addressing that small quality of life issue, Outward? Very well then. Onward.

What really gets me about Outward, despite all my bellyaching, is that it feels so old that it all feels new again. The attack buttons don't feel right. The defend buttons don't feel right. My health bar is a rather unobtrusive circle so far off in the lower left corner that I could be hanging on for dear life and never even know it. Stuff doesn't pause when you're flipping through menus (thanks, backstabbing rogue, for delightfully informing me of that gameplay quirk). The menus are worse to navigate than a Fallout Pip-Boy, and Outward's menus somehow convey even less information.

When it's dark, it's dark. I'm clinging to a torch like my life depends on it. The architecture barely makes sense in some places; indoor areas make terrible use of space, million-dollar mansions are halfway on stilts over there on the hill, staircases crisscross past each other for no reason, and second-story decks have a curious lack of supporting pillars. The ground looks like it was just kind of smooshed around in some ways, especially when looking at mountains and hills.

Even giant sea creatures like starfish cling so high up on rocks where it's obvious high tide doesn't even reach. Caves are carved out as unnaturally as possible and creatures pace back and forth with no real place to go. Even the age-old question of "where do the NPCs go to the bathroom?" is not addressed in Outward at all. Like, at all.

It's because Outward feels so off, that it feels so turn of the century. That's what keeps pulling me back in. Because the creatures' behavior, the townspeople's behavior, the architecture's behavior, the topography's behavior—because none of it quite makes sense, it forces me to engage it all like I'm seeing it for the first time. It leaves me feeling uncomfortable as a gamer. Like I have no idea what I'm going to run into next because, again, none of it feels 100 percent right.

I can't wait to get back in there. Here's 90 minutes of my first steps into this off world. And, trigger warning: I walk a lot. It's just something I do. Don't click play if that's going to ruin your afternoon.