Cheer up, Stadia fans: Rock of Ages III to be Free with Stadia Pro August 14th

The Stadia community is still acting all butt-hurt after the latest Stadia Connect - as though they had forgotten the three awesome and huge UbiSoft games announced two days earlier, and the 20 or so games revealed in the Connect weren't far more content than any human could possibly handle. Whatever. It's a quarterly press conference, not a reading of the gospel. Pull it together. AAA exclusives are coming. Games aren't created overnight. 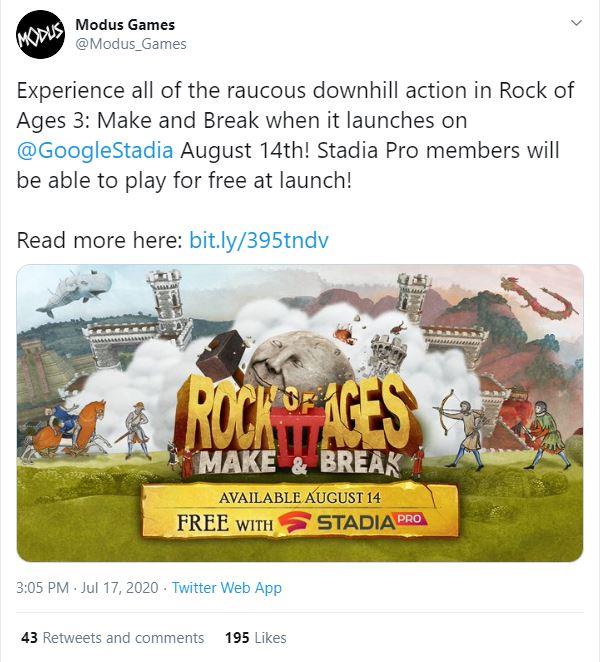 What the community is seemingly quick to forget is the fact that Google does weird stuff, and announcements drop from the sky randomly - like this tweet from Modus Games yesterday stating that its brand spanking new game Rock of Ages III: Make and Break will be Free with Stadia Pro on August 14.

My point is that Stadia doesn't ever seem to show all of its cards, Connect or otherwise. Here we are, four days after the big event, and this fairly large and important announcement just comes sliding out of left field, virtually unnoticed. I'm fairly certain we can expect more of this sort of behavior.

Rock of Ages III: Make & Break is a competitive tower defense game that has players bursting through defenses by controlling a boulder careening down a slope. This newest iteration allows players to create and share their own maps (thus the "make and break" subtitle"). The game looks super fun, and the fact that it will be free for pro members less than three weeks after release is a huge bonus.

Stadia Pro continues to be an enormously good deal - rivaling the Epic Game Store in donking players over the head with freebies. Yeah, I know Pro costs ten bucks a month, but whatever. You easily get $60 - $100 of free games each month - and Stadia shows no sign of slowing down. Buck up, Stadia fans, the future is bright!