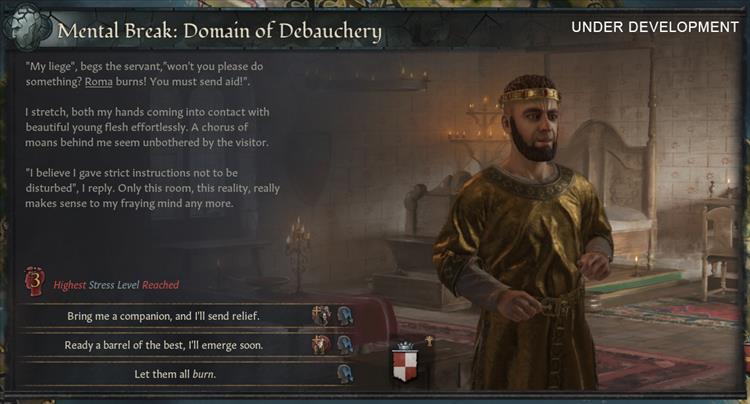 Paradox Interactive is lost in the weeds with their June update for Crusader Kings III. The fast-talking Community Developer for the CK3 team slaps things right in the face with a screenshot of ... game coding. But not to worry, that's only a snippet of this meaty 12-minute video.

Decisions, decisions. Linnea Thimren, content designer, goes over how a player carves out a character and directs the development of their realm. There's a lot of flavor unlocked through, say, culture and religion. One that pops up on screen in this video is the decision to either go on a pilgrimage to prove your dedication to the gods, or search for a physician. Can't help but wonder why science and religion have to be such binary outcomes, but hey, it was the Middle Ages.

There appears to be an Event happening. Ewan Cowhig Croft, another content designer, talks about events. This is the guy that digs into that page of code. Croft describes how CK2 used hard-coded events, but CK3 will use scripting. I'm not even sure if he's saying anything to me as a player, or if this is somehow information for modders? He does say that we'll definitely still want a tutorial, but I don't know if he means for people that actually look at scripts, or if he means any Paradox Interactive game ever made.

Stress. Sean Hughes, content designer #3 in this video, talks about characters' stress level being a measure of their mental well being, in the same way that health is a measure of their physical well being. Fulfilling obligations, being forced into good or bad situations, having to murder someone in cold blood when they're generally a peaceful, heartfelt person, these things all affect stress. Every character in CK3 has three personality traits. Traits like compassionate, shy, diligent, lazy. ("The easiest road in life is the road most taken by Matilda." "Matilda does not shy away from hard work." This flavor text is pretty alright.) All this right here? That's the good stuff in Crusader Kings. Who cares about painting the map red. Who cares about combat bonuses and penalties. I'm here for the drama.

Bjorn Iversen is the audio director, and his priority when it comes to the soundtrack is storytelling. Good man, Iversen. Making the map sound alive is a priority. The oceans, the forests, the ambiances of different strongholds across the entire map—they sound different wherever you are. You can even replace the soundtrack with your own soundtrack, something they're trying to make easier this time around. But I'm certain the bagpipes and hurdy gurdies will be spot on. Not to mention the full orchestra, church choirs, and solo vocalists across six hours of music. But the senior composer on CK3 also admitted that they didn't want to go full medieval on the music. "It's very nasal. I don't think anyone wants to hear that for a hundred hours."

Lots of good info all around in this June update. Paradox will start streaming the game in August. And, for now, Crusader Kings III is still on track for a September 1 launch on PC.