Fallout: New Vegas turns 10 this year. So do its glitchy mission triggers, infinite load screens, and crashes to desktop. But I'm not letting that stop my first-ever playthrough of this modern classic.

There’s a song from the 1980s by John Mellencamp. He sings, “A little ditty about Jack and Diane. Two American kids growing up in the heartland.” Well, this is a glitchy story about Carlitos and Joana. Two New Vegas kids growing up in the wasteland. Like a lot of stories that can happen in Fallout: New Vegas, the story I experienced of Carlitos and Joana is bugged. Their love story never ends, never finds resolution, because the story script is glitched and stuck in a loop.

But I refuse to let New Vegas’ glitches get me down. Instead, I’m letting them become part of the story. They’re canon now. Like the huge, blue-skinned Nightkin, for instance, that stood motionless, night and day, staring into the Brahmin pen on the edge of Novac, who flew 30 or 40 feet into the air when I hit him with the hammer I’d looted off an elite Caesar’s Legion assassin. Or the lone traveling merchant, who’d long since been left behind by her pack animal and her mercenary guards, standing knee deep in concrete on the interstate freeway, the sun beating down on her desert cap and goggles, with nothing left to say to me or anyone else that passed her by on way up to 188 Trading Post.

These and many more, I’ve decided, aren’t glitches. I imagine them as part of the “Wild Wasteland” perk, the perk you can take from early on that injects even more zany objects and events into New Vegas than there already would be. No, these glitches aren’t technically part of the Wild Wasteland. But I’m telling myself plenty of lies just to get by. Because if New Vegas is glitching out on a story, at least it’s not crashing to desktop or sticking me on an infinite load screen, watching that roulette wheel in the bottom-center, never stopping, forever spinning.

When I met Jack and Diane—pardon, Carlitos and Joana—I had plenty of reasons to suspect that their story would be bugged. But I’m not that jaded. I was just playing the game. New Vegas tells such good little ditties—pardon, stories—that it’s hard not to hit reload as soon as I have crashed to desktop or, indeed, had that internal timer go off in my head telling me, Whoops, it looks like too much time has passed and you are trapped in another infinite load screen. But I kept reloading for Carlitos and Joana, those two New Vegas kids growing up in the wasteland. 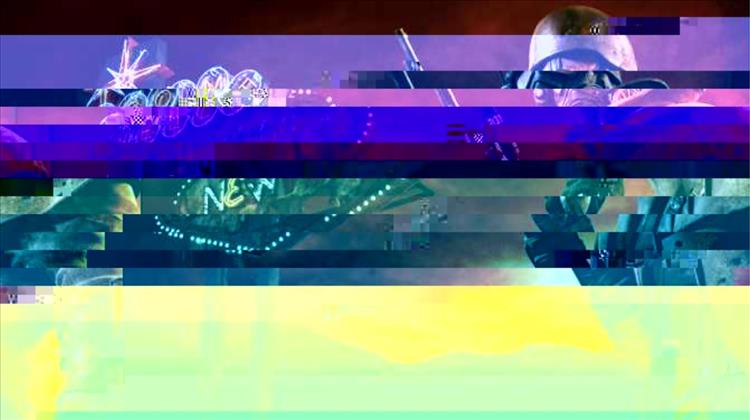 I met Joana first. She was dancing in the lush courtyard at the Gamorrah hotel and casino and brothel, essentially. Some folks don’t care for the presence of the New California Republic, but if Joana didn’t like my desert military NCR threads, she never mentioned it. In her overly breathy way that some people find attractive, she only referred to me as “hon,” and often asked me for some “sugar.” I was raised in the church, however, so I’m not sure what she was talking about, as I definitely kept my eyes level with hers and wasn’t staring down at her dominatrix-inspired outfit with a leather bra top and handcuffs hanging off her skirt.

I was going to partake in the escort services provided by certain employees of the Gamorrah hotel and casino and brothel, but my lovely wife and scary-smart daughter were in the living room with me. My 10-year-old had already looked at the screen once and said, “Hey, Joana, put on some more clothes, girl!” And I said, “Yeah, haha?” I kept an eye out for my kid, but she went right back to playing Sky: Children of Light on the phone, grinding for a new cloak or emote, constantly biting her tongue so she wouldn’t ask me for another five dollars to hit up an in-app purchase.

She’ll be okay. Don’t call Children’s Services on me yet.

Joana’s room is red and sultry. There’s a heart-shaped bed, if you’re into that kind of thing. Joana has got a thick shell. She’s a tough nut to crack. But after talking to her a bit, we finally got past the “honeys” and “sugars” and got down to the real problems that exist within her profession, and more specifically the problems that come with working for a boss with unspeakable perversions. Her story got sickening pretty quick. There was no way I was going to become a customer. Not after she told me about her boss. But on a more tender note, I wasn't going to bring receipts into this after she told me about Carlitos.

See, there was this one guy, Carlitos, that had somehow been there for her in the beginning, before the dancing, before the prostitution, before everything at Gamorrah. But Carlitos had been out of her life for a while now. Joana wasn’t even sure if Carlitos was still alive, let alone if he was in town. He was, though. He’s just a couple blocks down the Strip, in fact. He’s at the Vault 21 hotel.

I found Carlitos sleeping on a mattress on the floor in the maintenance office at the Vault 21 hotel. He wasn’t sleeping on the job. I just happened to show up at 3 a.m. My bad. Up and at ‘em, Carlitos. He wakes up and tells me a similar tale of long-lost love. There was this woman, Joana, who meant everything to him as well. But for whatever reason, their separate lives as a Vault 21 Mr. Miyagi and a Gamorrah go-go dancer forced them to lose touch, even when they were still so geographically close. I don’t even think Joana or Carlitos told me any specific stories about one another. They didn’t have a pre-existing mutual love of leather straps or adjustable wrenches. For all I know, the only thing they meant to each other is that they were the last thing that felt normal before things went separately sideways in their lives.

But that was enough for me to want to help them. It wasn’t the greatest love story ever told. But it was a love story. And those are mighty rare in New Vegas. So—without spoilers, I’ll just say—that I had to run back and forth between these two multiple times. I felt like the middleman in high school, passing notes back and forth between two love birds. Carlitos is alive? Tell him I love him! Joana is alive? Tell her I love her, too! Ask Carlitos if he wants to run away with me. Ask Joana if she wants to run away with me. Okay, now that we’ve gotten that straightened out, tell Joana to meet me here, and then we’ll run off into the desert together….

And that’s where their story ends for me. The mission glitches out. Suddenly, the game can’t figure out how to trigger the next step in this side quest. It basically grays out in my Pip-Boy, never to follow through with the next objective, never listing the next step, and never dropping down into the Completed Mission section either. This is how Carlitos and Joana’s story ends. Stuck in a loop, like one of New Vegas' infinite loading screens, rewinding back to when I first met Joana and Carlitos.

Joana goes back to turning tricks—with me as just another john that’s walked into the Gamorrah casino & hotel & brothel. She goes back to generically calling me Hon and, even though I am not her neighbor, asking me once again for some sugar.

And Carlitos, he’s stuck in the same loop he's back there in Vault 21 hotel & casino. He gets to thinking about this one woman he knew, Joana was her name. He wonders whatever happened to her. She couldn’t possibly still be around, could she? Nah, probably not.

So I chalk up another loss to the New Vegas wasteland. It didn’t matter that I had Speech skills to beat the band. Didn’t matter that I broke down Joana’s famously thick shell. And Carlitos? Bro, you were finally going to get out of here, under cover, under a disguise, and with the love of your life in your arms. But a different bug got you. Now, you’ll never follow through with that plan. Everything was in place, and you just stuck to sleeping on the mattress on the floor in the maintenance room at Vault 21, with Joana, the love of your life, stripping at the Gamorrah. She’s only about 200 yards away, but you’ll never see her. Your lifestyle, Carlitos, doesn’t send you into brothels; and your lifestyle, Joana, doesn’t take you down into repurposed Vault-Tech vaults. You're not even two ships passing in the night. You're two ships never even pulling out of port.

So, I put on my cowboy hat, stepped back out onto the busted-up asphalt of The Strip, and washed my hands of the situation. Your glitched-out mission is now part of my story. It's canon. And that's a little ditty about Carlitos and Joana, two New Vegas kids doin' the best they can.