It's been a while since a Nintendo Download post, but even with everything going on in the world, the gaming world doesn't sleep. First up is the latest entry in the Minecraft universe with Minecraft Dungeons. We've seen Minecraft go into the world of "point-and-click" stories so to speak with the Telltale Games series, and now Minecraft goes dungeon crawler. On May 26th you and up to three friends can battle through varied levels packed with action and loot (as any good dungeon crawler should be) as you attempt to take down the evil Arch-Illager.

Next up is WHAT THE GOLF? No seriously, that's how it's written out and I think I may start using that in place of "what the heck?". WHAT THE GOLF is a physics-based golf parody where every golf course is a "new surprising type of golf".  Want to get a birdie by hitting a bird? How about a "Home In One"? The absurdity of things will literally make you say WHAT THE GOLF. As a somewhat fan of golf I'm actually excited to check this one out.

Meanwhile over on the Nintendo Switch Online service we have three new Super NES games and one for the NES. The NES is getting Rygar while the Super NES is adding Wild Guns, Operation Logic Bomb, and Panel de Pon to the collection. Wild Guns and Operation Logic Bomb might ring a bell with some more experienced Super NES players, but Panel de Pon not so much. We did get Panel de Pon in the west, but over here we know it better as Tetris Attack. If you've never experienced this interesting puzzle game, I definitely recommend checking it out if you have the Nintendo Switch Online service.

Check out the official press release for more info on this week's Ninendo eShop sales and other offers. 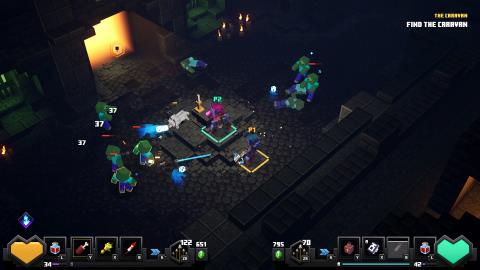 Minecraft Dungeons will be available on May 26. (Graphic: Business Wire)

Nintendo Switch Online is a paid membership service that allows members to team up or face off online in compatible Nintendo Switch games, such as Super Smash Bros. Ultimate, Luigi’s Mansion 3, Pokémon Sword and Pokémon Shield. Members also enjoy a curated library of NES and Super NES classic games, including Super Mario Bros. 3, Super Metroid and The Legend of Zelda: A Link to the Past, among many others. To find out more about the benefits that come with Nintendo Switch Online, to view membership options and to learn about a free seven-day trial for new users, visit https://www.nintendo.com/switch/online-service/.