There's a funny paradox to be found in online gaming: When it comes to human behaviors, no one behaves less human than other humans. Developers take great pains to make their AI, their non-player characters, walk, talk, and act like humans. Which makes it all the more immersion-breaking when you run into players with names that snake past expletive filters, hop around you in circles, chop at you with hatchets unprovoked, or have Frozen 2 playing through a hot mic blasting through local audio channels. So, it's with this knowledge that I happily return to Fallout 76, with the Wastelanders' content introducing NPCs to the mini-multiplayer online role-playing game. With more artificial intelligences around maybe we can get a little humanity injected into the game. 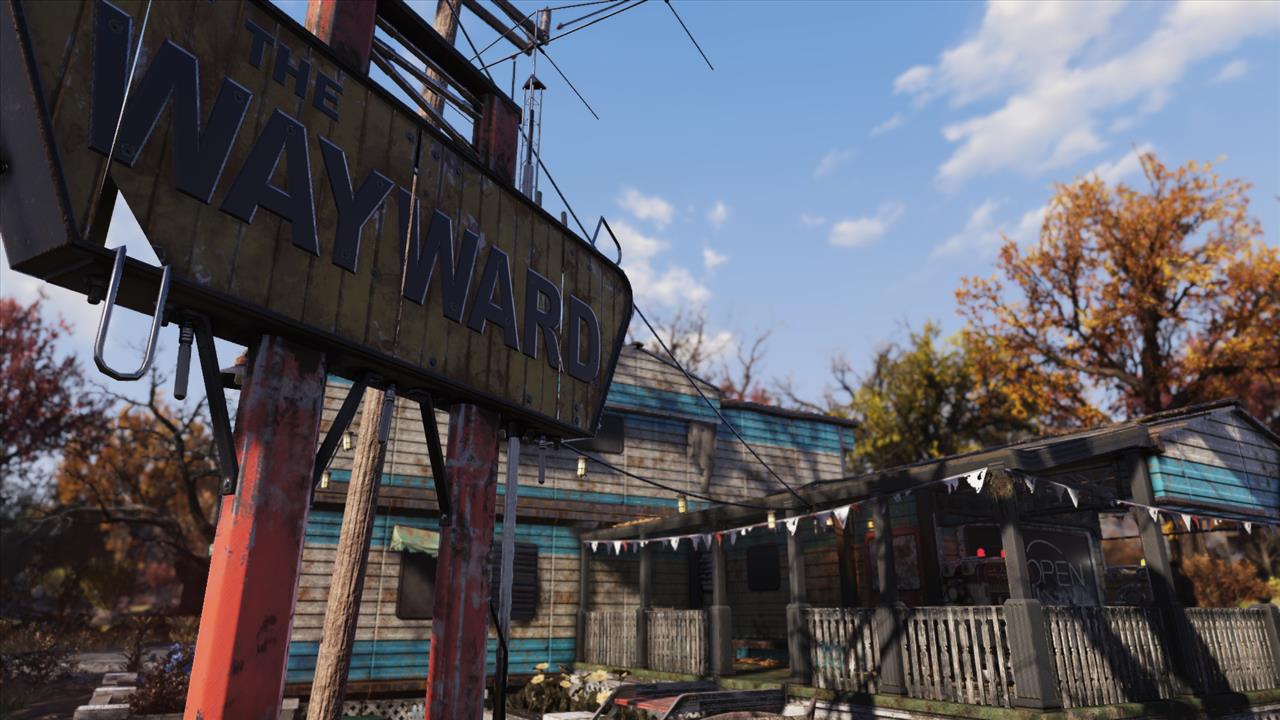 I hadn’t gone far. As the crow flies, I’d only wandered a relatively peaceful triangle between Vault 76, Morgantown Trainyard, and the town of Flatwoods. Even did a little weapons and armor crafting in the Overseer’s Camp at the T-intersection of Route 86 and Route 88. So, while I’d pulled out my pipe pistol on a Scorched or two, maybe put down the requisite kill-10-rats amount of Mole Rats, I’d barely ding’d level 5—in a game where I’ve seen players running around in the 300s. I’m doing my best not to compare my lightweight boiled leather armor bits to their Nuka-Cola branded Power Armor. Baby steps. 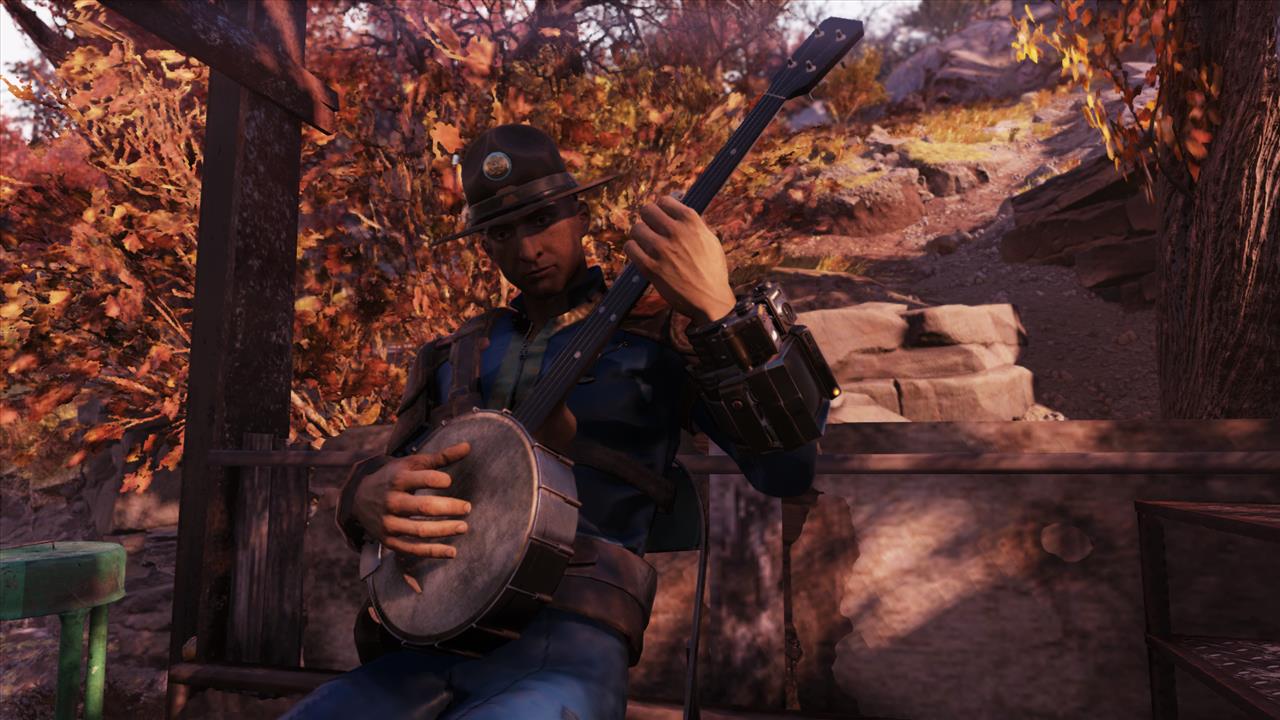 With my previous but incomplete wanderings in the Capital Wasteland (Fallout 3), The Commonwealth (Fallout 4), and New Vegas (New Vegas), it’s fair to say I’m not a fresh-faced newbie when it comes to the Fallout universe. But I’m certainly new to Fallout 76's Appalachia. So new, in fact, that I’m still working on my pronunciation of Appalachia. It’s not apple-lay-shuh like we say out here in the West. In the Virginias, it’s pronounced more like, Duck because I’m gonna throw this apple-at’cha. 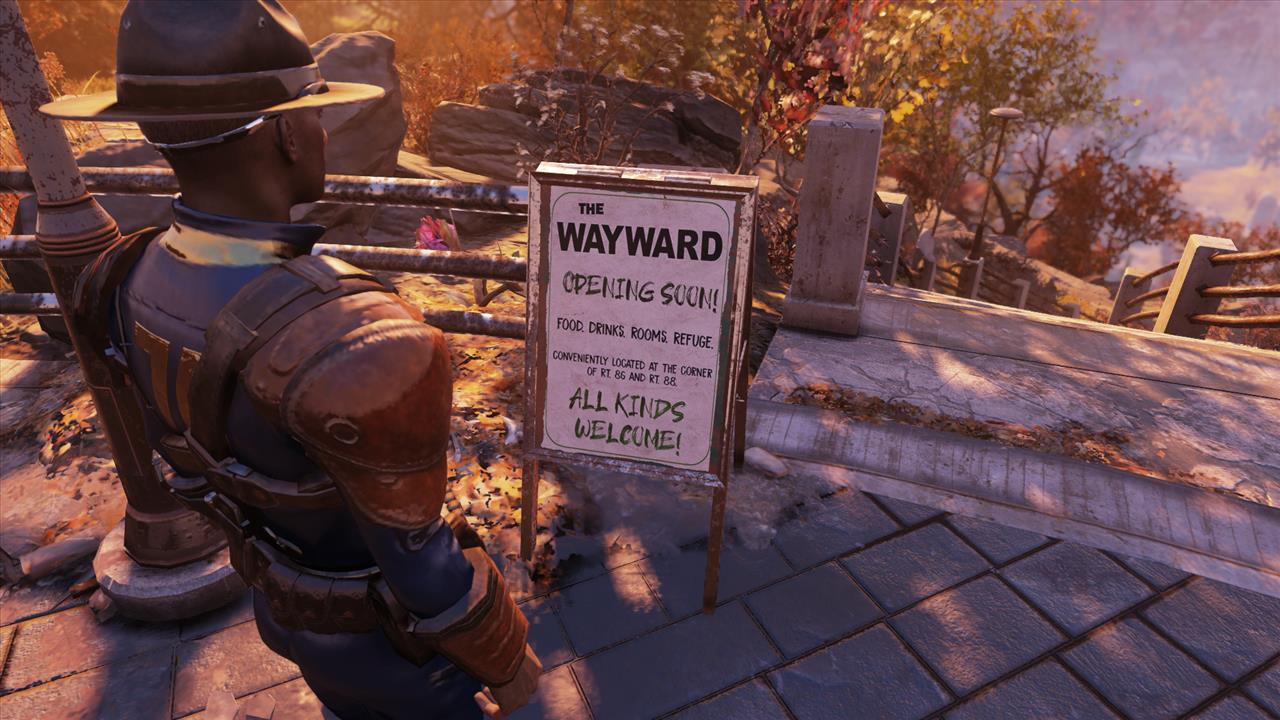 I went back to where I’d started, where we all started. I realize that yes, vault dwellers have literally been living under a rock, with Vault 76 having been built inside of an inconspicuously tall peak. That peak is located in an area of lush deciduous trees known simply as The Forest. There’s a decent amount of concrete work and railings installed around Vault 76’s entrance. Makes it seem almost monumental compared to the hole in the ground you’re shoved into in Fallout 4, or the mine shaft-looking entrance in Fallout 3. But heck, I guess all of them are glorious compared to the unmarked grave you start in when you go to New Vegas. That’s a different kind of vault. 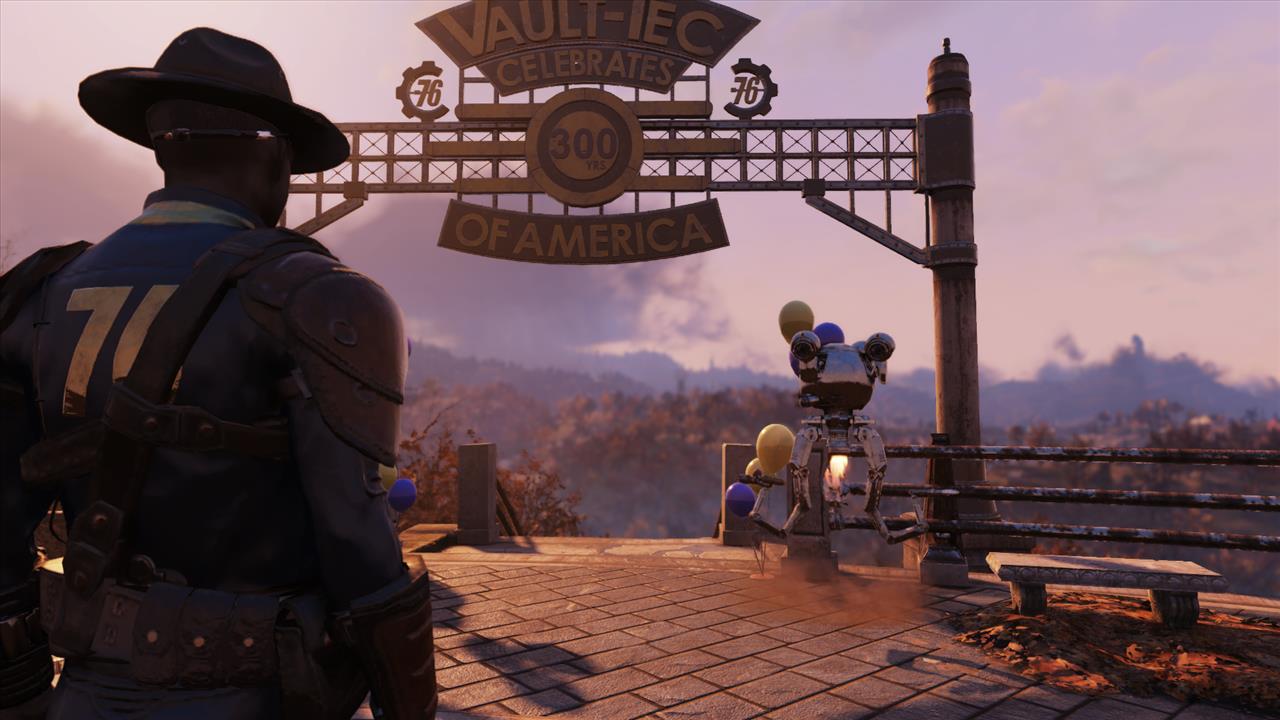 I ran to the top of Vault 76’s peak. I chugged past two Settlers—the first two NPCs I’ve seen in the game—with one of them hollering at me, recognizing me by my skintight Vault-Tec blue jumpsuit. No time to talk, ladies. I’ve got to verify that the entrance to Vault 76 is locked.

It’s locked. I turn around and spot an A-frame sign saying in three different fonts:

The Wayward
Opening Soon!
Food. Drinks. Rooms. Refuge.
Conveniently Located at the Corner of Rt. 86 and Rt. 88.
All Kinds Welcome! 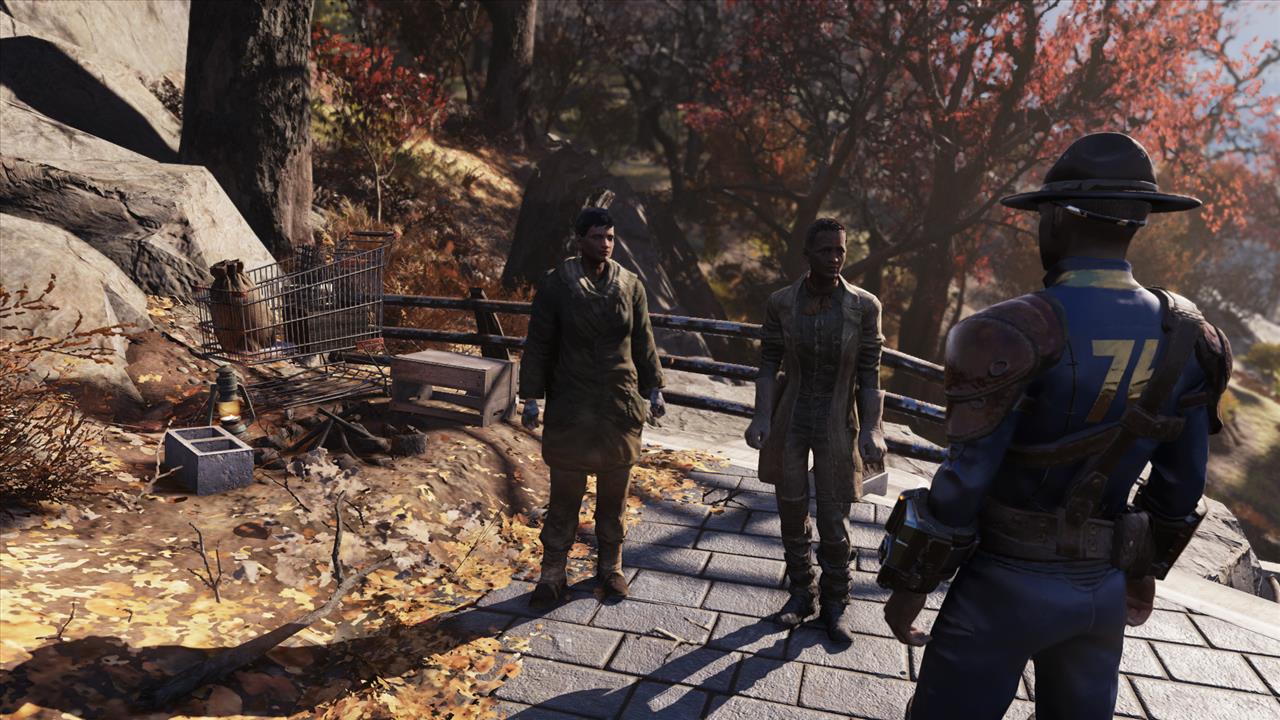 The Wayward sounds like a new hub for The Wastelanders’ content, smack dab where the Overseer’s Camp is, officially intertwining Fallout 76’s two main story arcs now. I know the band Kansas is anachronistic for the Fallout universe (a 1970’s band in a game world frozen in the ‘50s), but I couldn’t help humming the lyrics to “Carry on Wayward Son.” Carry on my wayward son. There’ll be peace when you are done. Lay your weary head to rest. Don’t you cry no more. 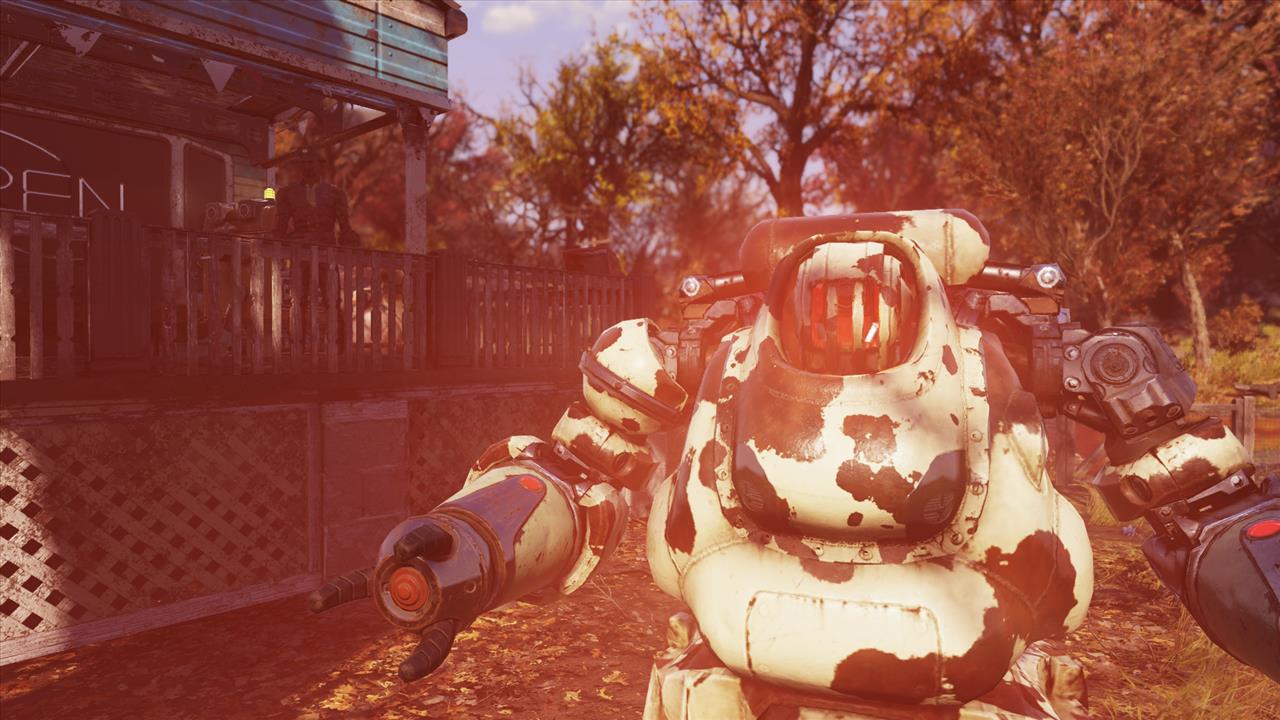 On the next flight of stairs down, I spot more Vault Tec balloons than I remember seeing pre-Wastelanders. There’s a butler robot that’s nervous about the appearance of some “very alive” NPCs in the area. I go meet these very alive NPCs. Two women that are on a treasure hunt out here in Appalachia. Apple-at’cha, I practice saying out loud. They managed to push a shopping cart with random survival goodies halfway up this mountain, though they lost all their money to some swindler in The Wayward. There’s no treasure to be found in Vault 76. But finding this legendary horde of vague treasure is what’s bringing all the boys back to the yard. To West Virginia, rather. 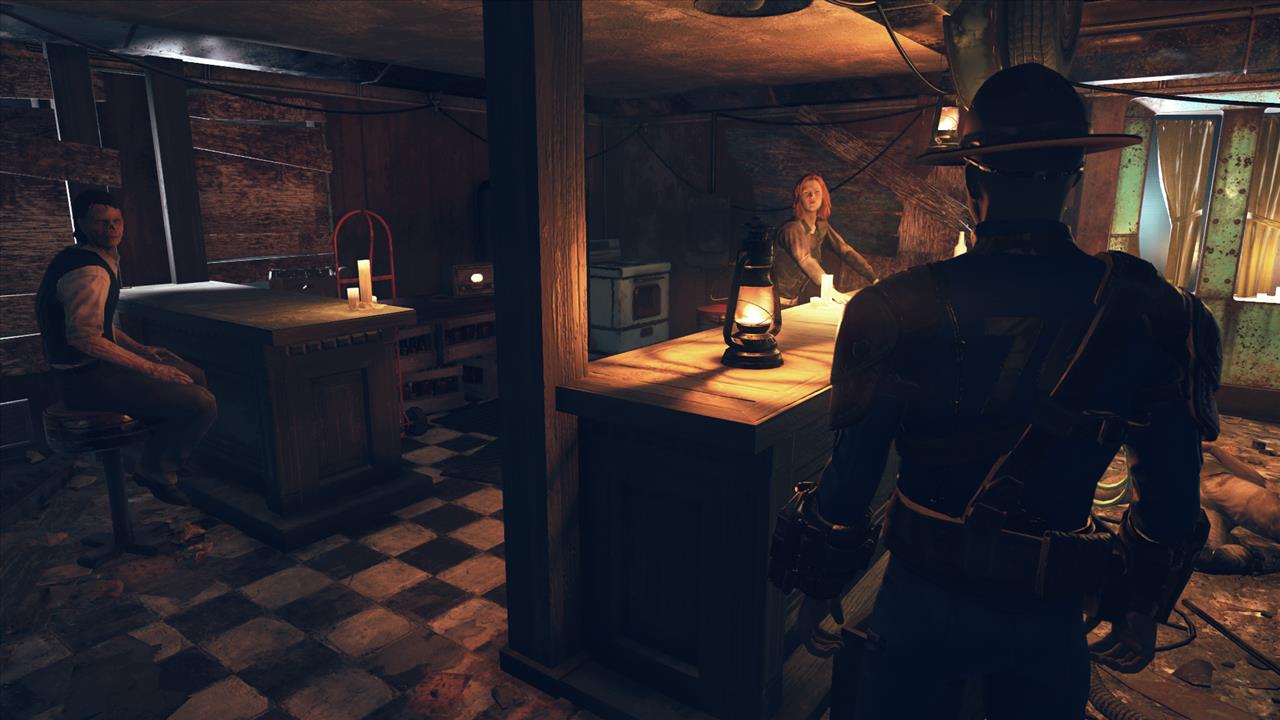 I tip my Campaign Hat to the two ladies that’ve come for a nonexistent payoff. There’s probably no chance they don’t turn into Raiders later. Here’s to hoping the Settlers find them first. One or two cow pastures and a few bee stings later, I find The Wayward. It looks like a double wide mobile home stacked double tall, party flags wrapped around the patio. A fella named Jide (pronounced jee-day, kind of like “deejay” backwards) is sweeping up outside. He tells me to go on in even though the Open sign is off. He has no idea the place is being robbed. And Betsy—the cow-print Sentry Bot patrolling the Brahmin between The Wayward’s room and board—is likewise oblivious. I was just kidding with the Kelis lyrics earlier, but this is indeed the yard where milkshakes are made.

Inside The Wayward there’s a Raider NPC holding a bartender NPC at gunpoint, then a third NPC shoots the Raider NPC. Welcome back, Fallout 76. You’re making good on your NPC promise. You’ve never been more NPC than you are right now. Consequently, you've never been more human either.