After a strong couple of weeks - with the release of Doom Eternal and the new Free with Pro games - Stadia dropped some surprise game announcements today. Two new co-op (albeit very different) games will be coming to Stadia later this year. 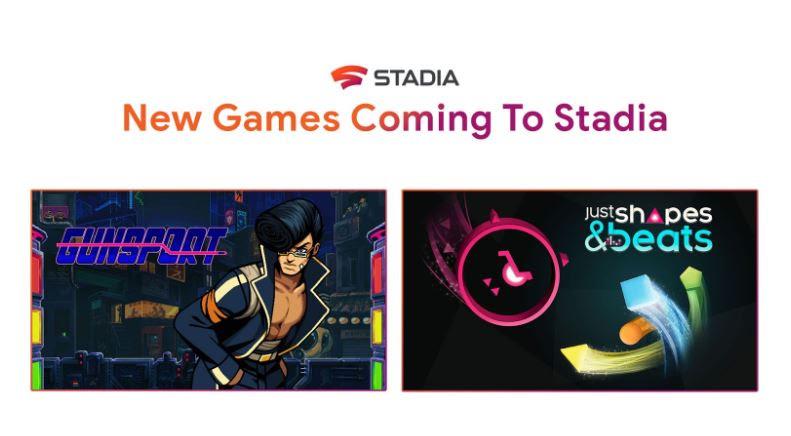 Gunsport, a new wild-looking sports game, will be a First on Stadia title.

"Gunsport is 2v2 volleyball with guns, with five stages, five teams, a story mode, and of course online multiplayer on Stadia. Designed as a mini-esport that encourages teamwork and friendly competition, each team has the same main weapon with which to shoot a single ball into the opposing team’s goals. But under certain conditions, players can activate their team’s unique special weapons and attempt to get ahead or turn the tide."

Just Shapes & Beats appears to be a rhythm-based shoot 'em up, developed by Berzerk Studio:

"Just Shapes & Beats, the game about shapes, and beats. It’s a new spin on the shoot 'em up genre, adding a layer of cooperation that’s at the core of the game because everything is better with friends. Play alone or with up to four players, local or online, through the game’s Story Mode or Challenge Runs. You do you, man.

"If you are as big a fan of music as we are, you’re in for a treat! Every handcrafted stage is orchestrated to the jams of over 40 rad tracks from awesome chiptune and EDM artists."

Tons of additional games are still on the horizon from Stadia this year, including Marvel's Avengers, The Elder Scrolls Online, and SUPERHOT. And don't forget to grab your new Free with Pro games - Stacks On Stacks (On Stacks), Serious Sam - The HD Collection, and Spitlings.