For Star Trek Online, April 5th has become an annual holiday; after all, it's First Contact Day, the first day Vulcans (officially) visited Earth in the Star Trek timeline, in the year 2063. This year Star Trek Online is celebrating from April 2nd to 23rd on PC, and from April 9th to 30th on PS4 and Xbox One. The event closely mirrors the events of the 1996 film Star Trek First Contact, with the Borg yet again traveling back in time to keep the Vulcans and Zefram Cochran from their date with destiny. Captains can enlist the help of 7 of 9 to build a replica of Cochran's famous warp ship the Phoenix, and eventually obtain the event's rare item, a Temporal Vortex Probe. I admit, having the Phoenix in your fleet, even as a museum piece, would be pretty cool, and it's always cool to see Jeri Ryan reprise her role as 7.

I've been tempted to jump into Star Trek Online before, but in the last year or two I've kind of fallen out of love with Star Trek. Discovery has gotten progressively more incoherent and grimdark, and the new Picard series was mostly just downbeat and depressing when it wasn't being tedious and convoluted. The thoughtful social commentary and optimism just aren't there anymore, and since Star Trek Online has been incorporating more Discovery and Picard elements lately, I think I'll stick to watching The Orville and leave First Contact Day to the diehard Trekkies. 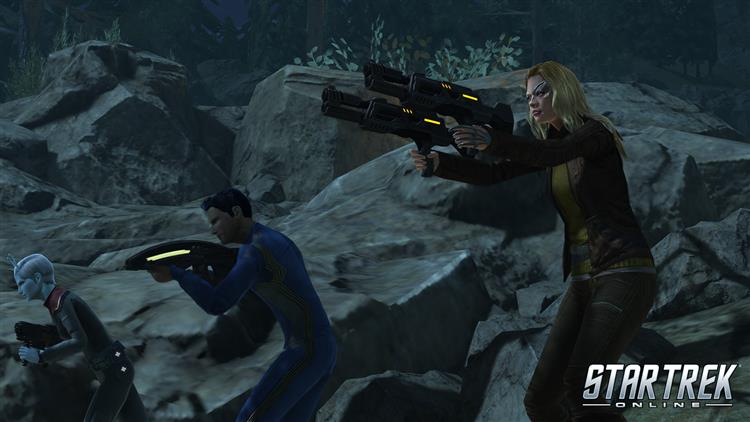 pril 5, 2063 is a special day in Star Trek history, as it marks the first time humans made contact with the Vulcans. First made popular in the Star Trek: Voyager episode, “Homestead,” this treasured holiday is also commemorated by captains yearly in the free-to-play MMORPG, Star Trek Online. The game’s First Contact Day celebration takes place on PC from April 2-23 and on Xbox One and PlayStation®4 from April 9-30. During this time, players will participate in a brand new patrol, launch their very own Phoenix rocket and work their way towards the ultimate prize – a Temporal Vortex Probe.

First Contact Day for Star Trek Online kicks off in Bozeman, Montana, the same site where Zefram Cochrane launched the historic Phoenix, the first Human warp-capable ship. Captains will travel back to mid-21st century Earth to face The Borg, who seek to alter the timeline to prevent first contact between humans and Vulcans. To accomplish this, players will enlist the help of Seven-of-Nine, voiced by Jeri Ryan from Star Trek: Voyager and Picard. Besides protecting the timeline from The Borg in this new patrol, players can also team up with four friends to build a replica of the Phoenix. After scavenging the area for engines, hulls and stabilizer parts, they will construct their own model and compete with other teams to see who can reach the highest altitude. Rewards for participating in these events include a First Contact Day bundle and for those who reach 14 days of progress, a powerful Temporal Vortex Probe which can travel through local space to debilitate enemy vessels in the area.

For additional details about the events and rewards for First Contact Day, please visit the game’s official blog.