What's this thing in Dreams? - The Quest For Cheese 2

Dreams on PlayStation 4 represents a true wild west of gaming, a strange corner full of user-created experiences that run the range from super-polished RPG experiences to weird (and sometimes disturbing) rooms where characters just scream in your face.

I snagged a copy of Dreams to dig into the Dreamiverse while on Coronavirus lock-down, and each week (or more often, if I get bored enough) I will be randomly selecting a game or experience and diving into it. For better or worse, I will play through to the bitter end, and report back here.

Today's experiment: The Quest For Cheese 2, by creator kianbroom. 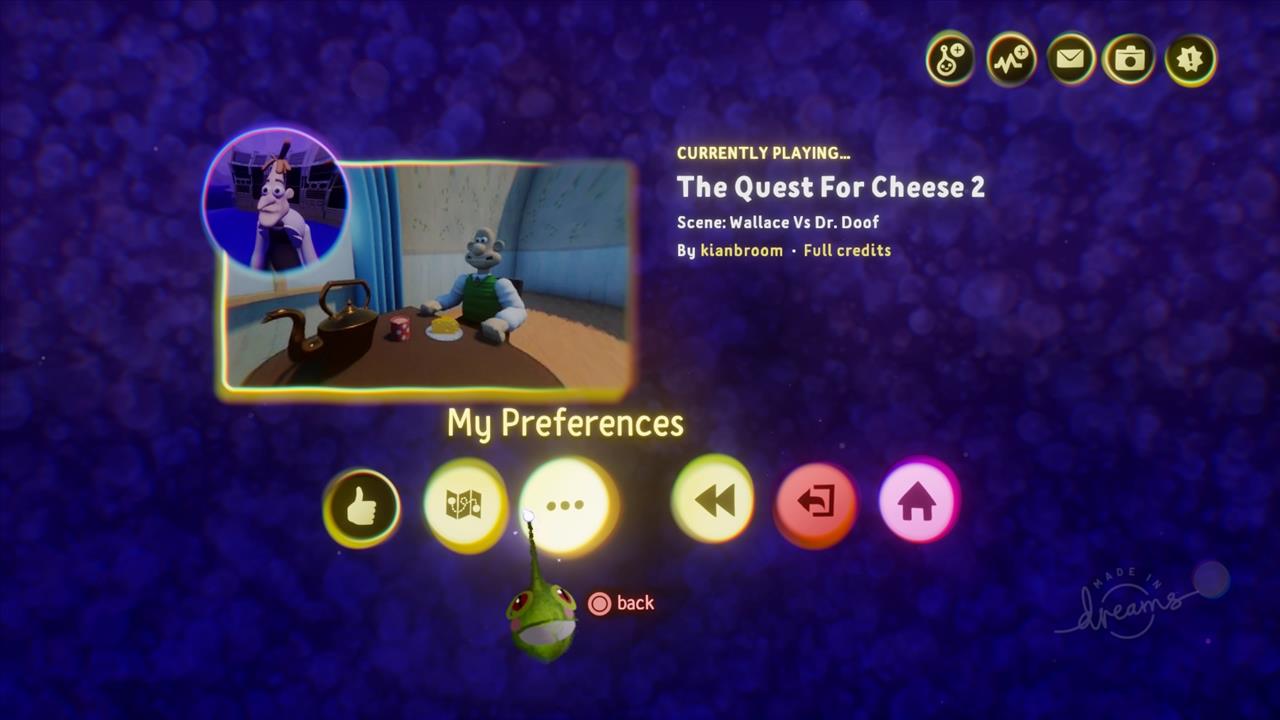 I was immediately drawn to The Quest For Cheese 2 by the image of a well-rendered Wallace, happily sitting at his table, anticipating a nice plate of cheese. I thought that I might be in for a brief little romp through a clay-rendered London, with maybe a few puzzles thrown in for good measure. Nope. 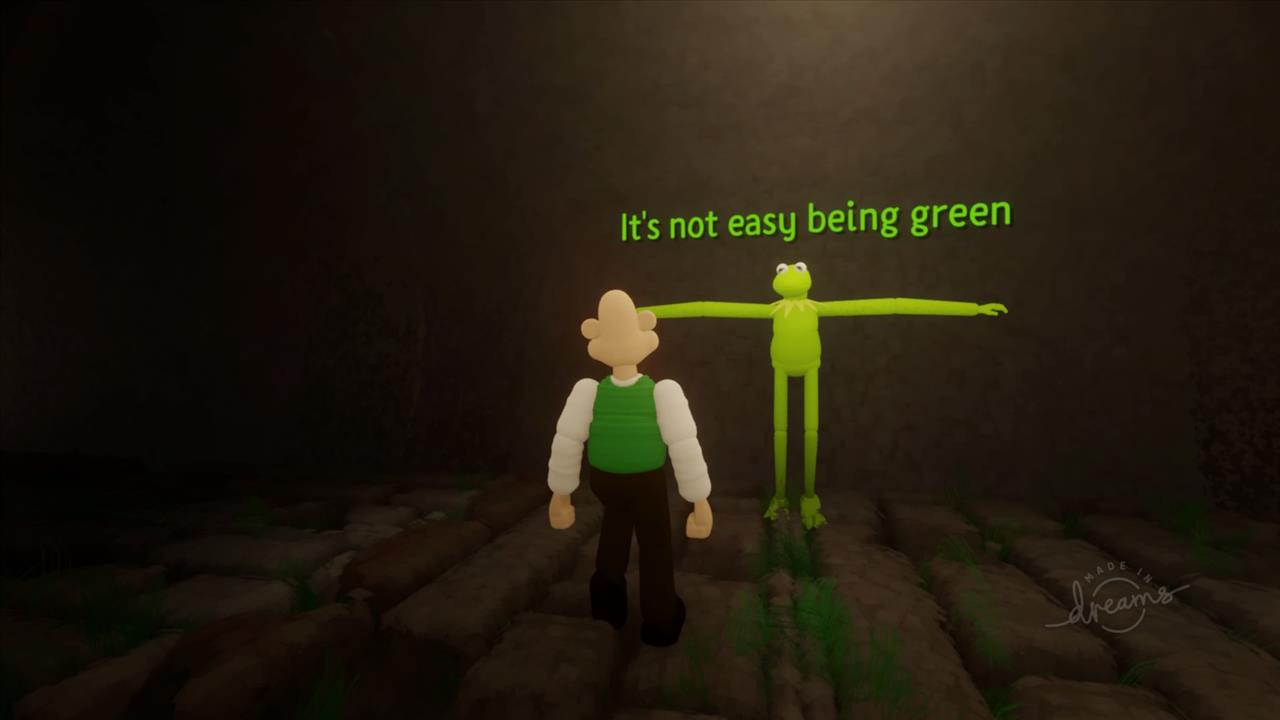 As you can see from this picture of Wallace's encounter with what appears to be a crucified Kermit the Frog (with eerily long arms) in a sewer, The Quest for Cheese 2 quickly turns into something else.

It turns out that Gromit has been kidnapped by an evil doer, sending Wallace spiraling through a kaleidoscope of pop culture references, bouncing from world to world with little rhyme or reason in search for his silent buddy. 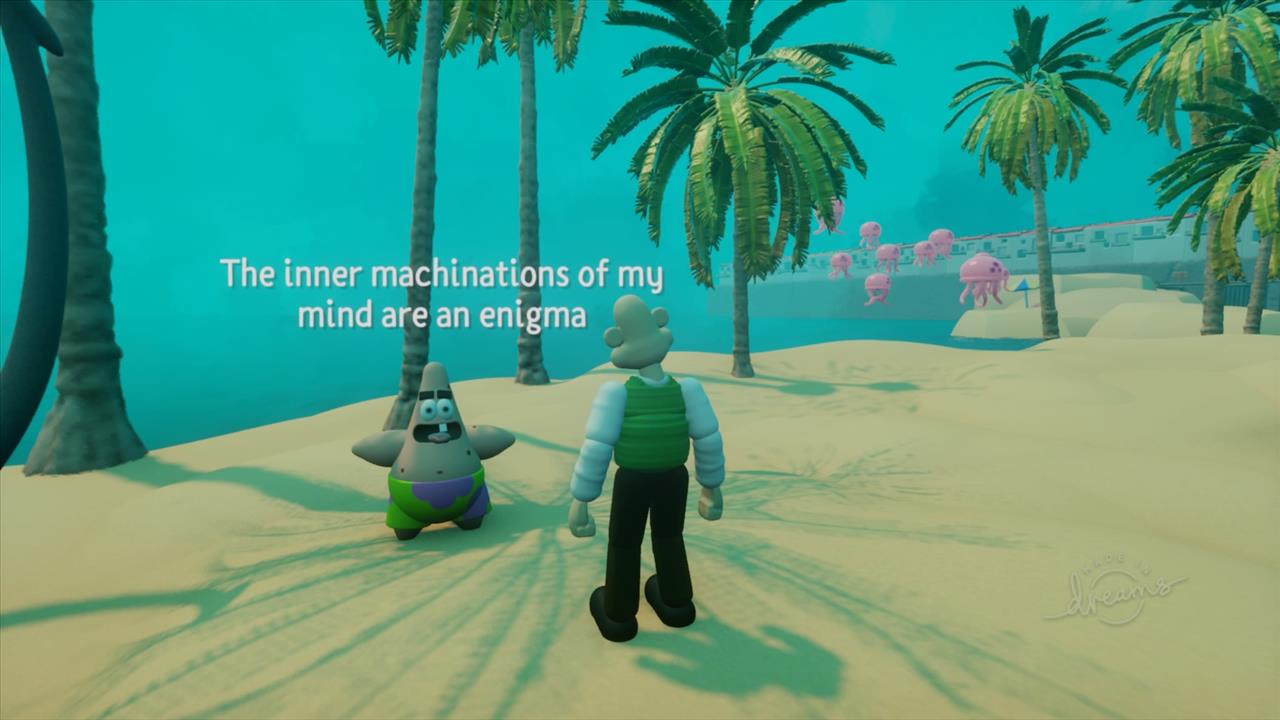 All of the characters represented in The Quest For Cheese 2 are voiced by the same guy, doing a fair impression of various cartoon characters through what can only be described as a 1960's plastic childrens microphone that has been buried in the earth for forty years. The sound quality ain't great. 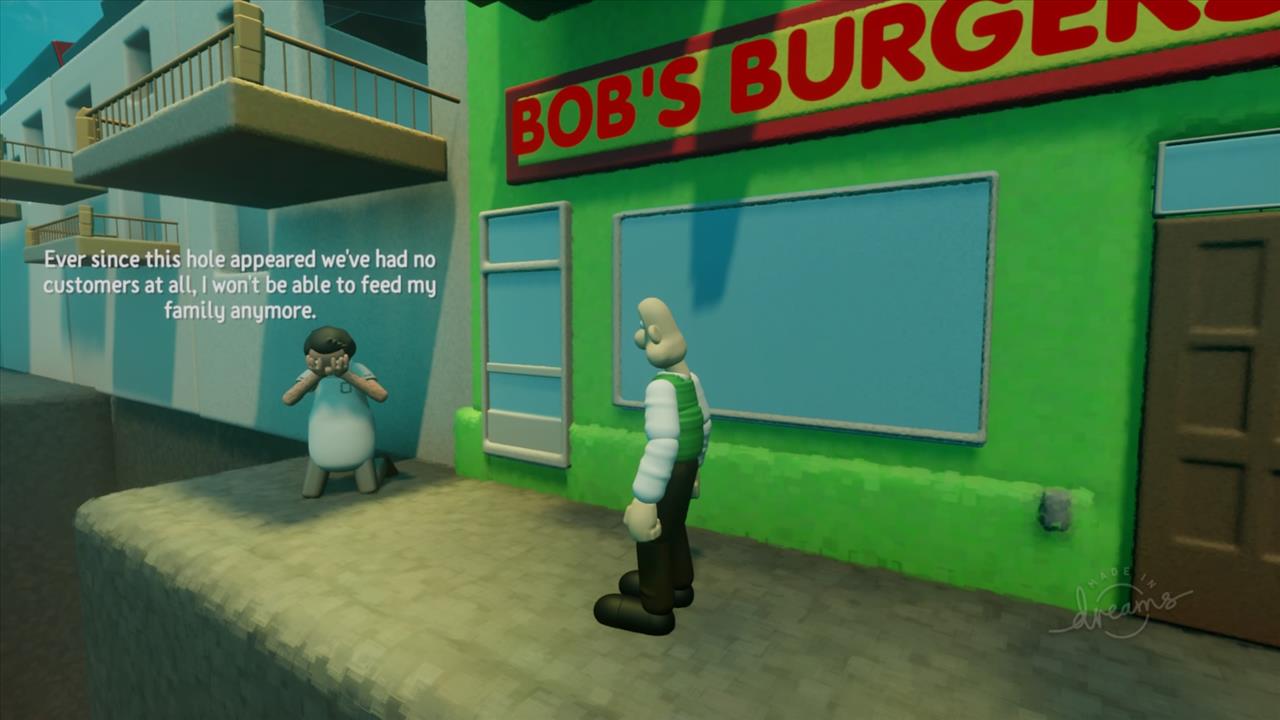 But what is great is the game's willingness to go flying off in any direction at the drop of a hat, with a 14-year-old's attention span (and sense of humor). No, this isn't the best game ever, but I did enjoy rounding the corner to see who was going to pop up next. 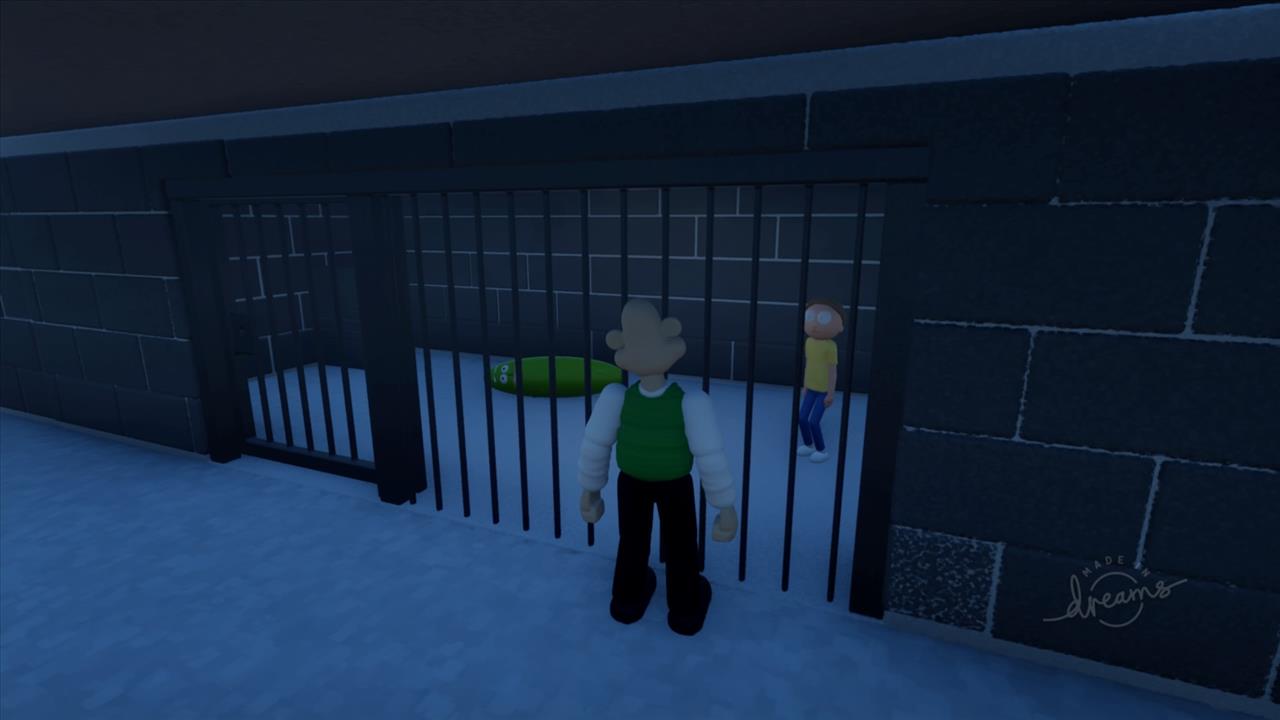 The 3-D modeling work was pretty impressive as well. Less impressive were the punishingly difficult platforming sections. Wallace is pretty floaty, and he has a tendency to take a couple of steps after landing, which makes trying to land a series of jumps on rotating platforms (with holes in the middle of them! Really, dude???) extremely frustrating. 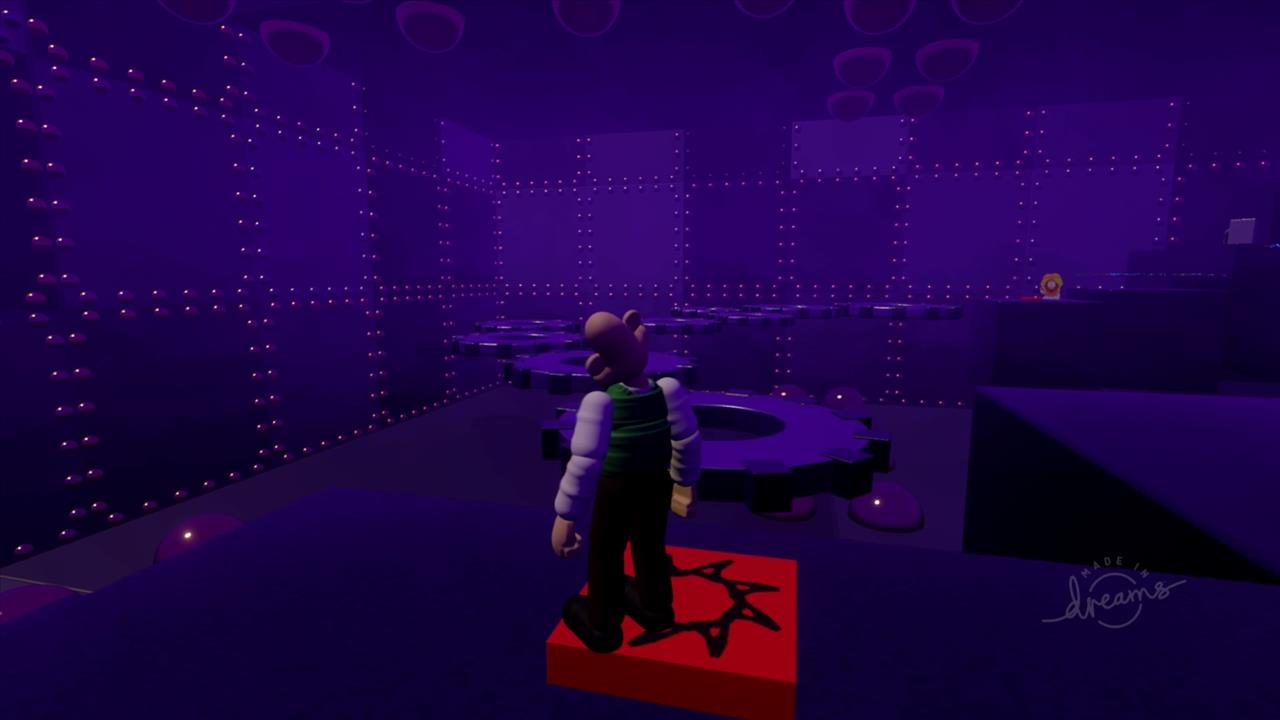 But this is Dreams, after all, so we can't expect a huge amount of polish. What this game does have though is flair, and at around 20 minutes (not counting the 500 missed jumps), it is relatively short. Not painless, but short.

Would I recommend The Quest For Cheese 2? Well, sure, for a Dreams game. Its a great way to experience the platform's utter disregard for copyright. I mean, this dude stuck Mickey Mouse down in a sewer sitting among a bunch of rats. And we can't forget the unlicensed track that hilariously pops up in the middle of the game.

So yeah, if you already have Dreams, and don't mind wandering through somebody's pop culture nightmare, why not? Give The Quest For Cheese 2 a peek.