CES 2020: Mad Catz shows off some mice, keyboards, and controllers

Mad Catz's 2020 lineup features a line of mice, a new headset, a new keyboard, some gamepads, and a fighting stick. Rising back from the dead, Mad Catz looks like they have a great lineup for 2020 and looking to make good on their return.

First up, they've got four new mice coming out with one only being released in 2020.  The R.A.T. PRO X3 Supreme has 10 programmable buttons and a sensor that goes up to 16,000 CPI. With over a dozen accessories, you can configure the mouse in over 100 different configurations. This is the mouse that will only be shipping in 2020, which makes this a limited-edition mouse. 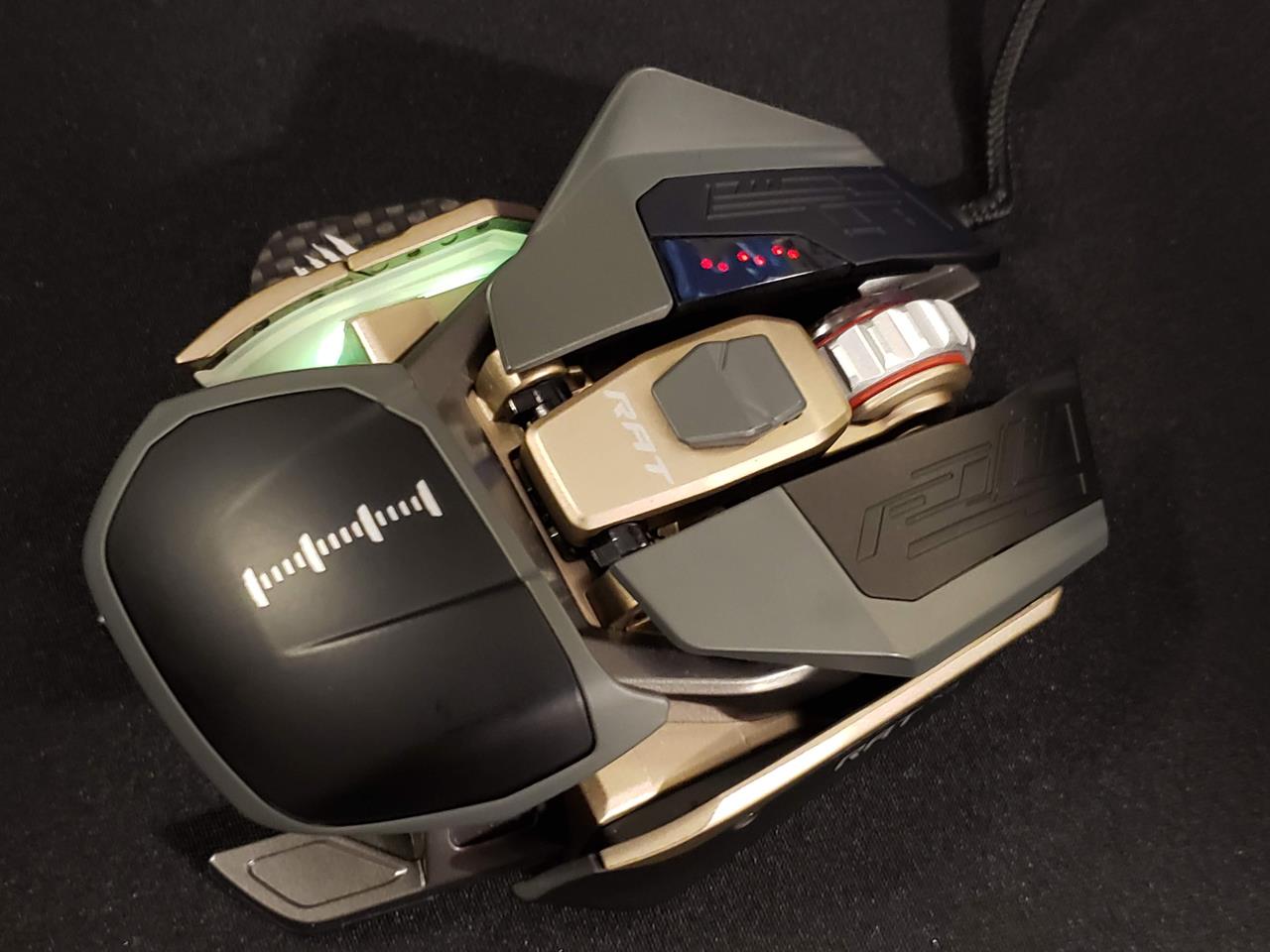 Something really cool was that you can rotate the mouse wheel up above its natural position and you can easily push it to either side with your finger. The process to move it up and down takes a little bit of force, however so you won't be flicking it up and down without taking a little bit of time and two hands.

Underneath is a LCD display that will show you which profile you are using. Just press a button to flip through them until you get to the one you want to use.

Speaking of the bottom, one of the accessories you can use to customize the mouse is switching out the feet. They're held in by magnets so changing them out is a breeze.

The R.A.T. 8+ ADV has 11 programmable buttons and an optical sensor with up to 20,000 CPI. The striking red mouse has switches that are rated for over 60 million clicks. It also can hold up to five different profiles and there's a few accessories as well to customize the feel of the mouse. I have to admit, the red color really makes this mouse stand out for me and there's a lot of good gaming customizations available on this one. 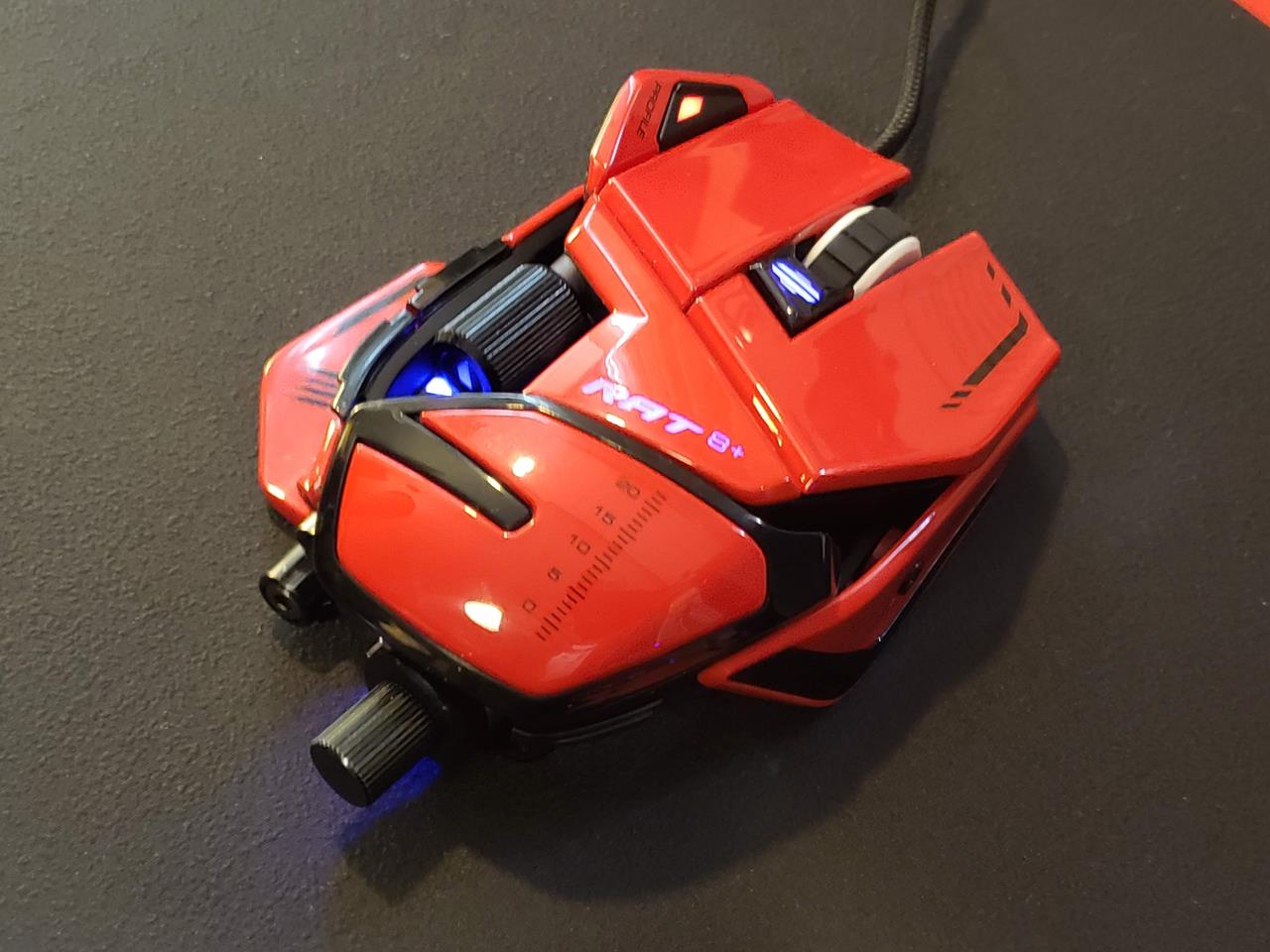 For those wanting wireless gaming, the R.A.T. DWS is a wireless mouse and can connect to your computer via a 2.4Ghz dongle or Bluetooth. Depending on the mode of operation, you can get up to triple digit hours on a single battery charge. The mouse felt light and moved about well based on my limited hands on experience with it.

There's 11 programmable buttons on the R.A.T. DWS and the ability to connect to multiple computers makes this mouse good for both gaming and productivity. 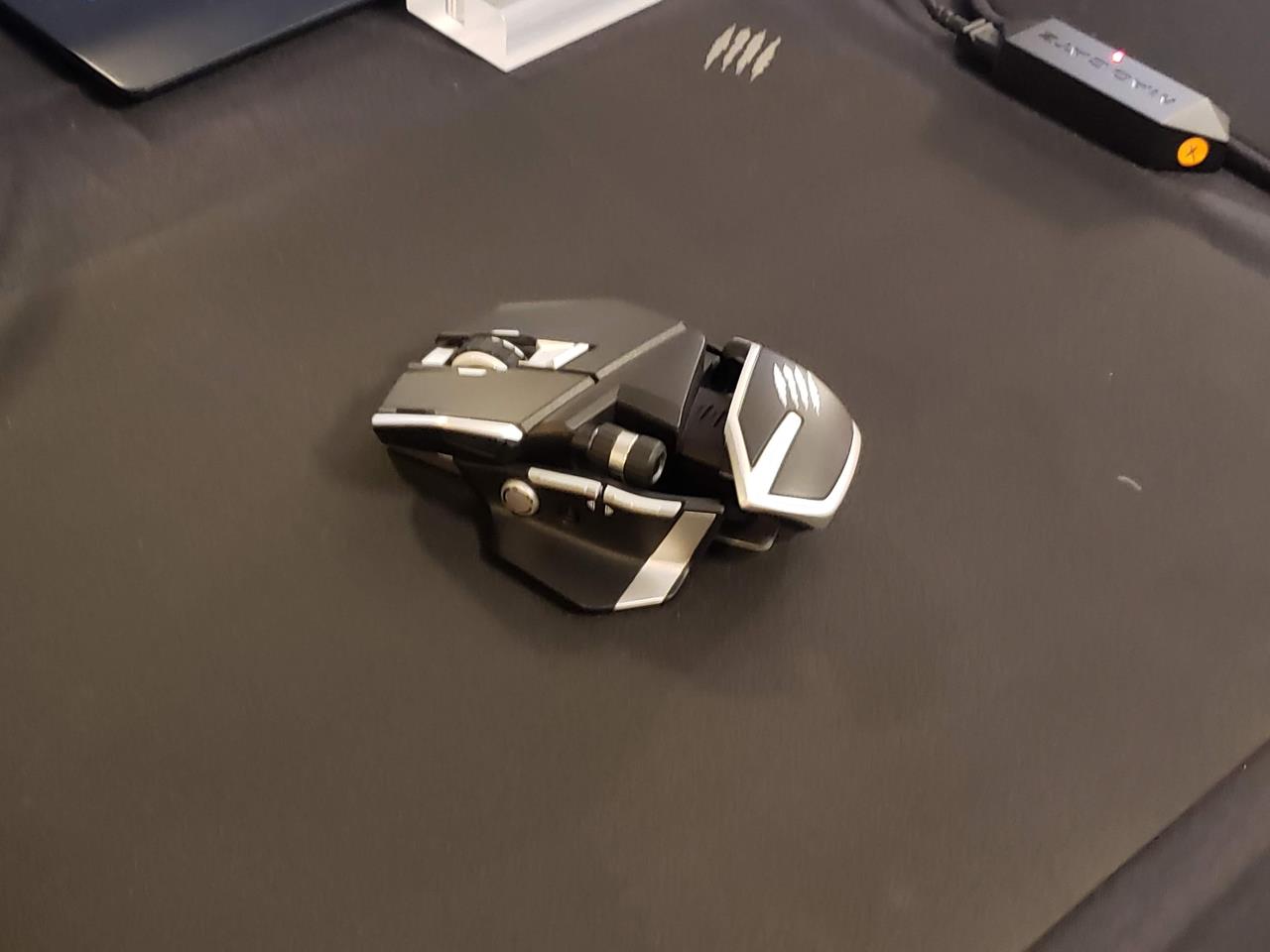 Finally, the R.A.T. AIR S has a 12,000 CPI sensor and features wireless charging via an included mat. There's a nice little RGB logo on the mouse that changes color. What's nice about the mat is that you can roll it up to make it easier to take with you on the go. You'll get about 12 seconds or so of power once you take the mouse off the mat, which is good because it won't just suddenly die when not in the charging area of the mouse mat. The rollable mat is new as Mad Catz has had the solid charging pad available before. 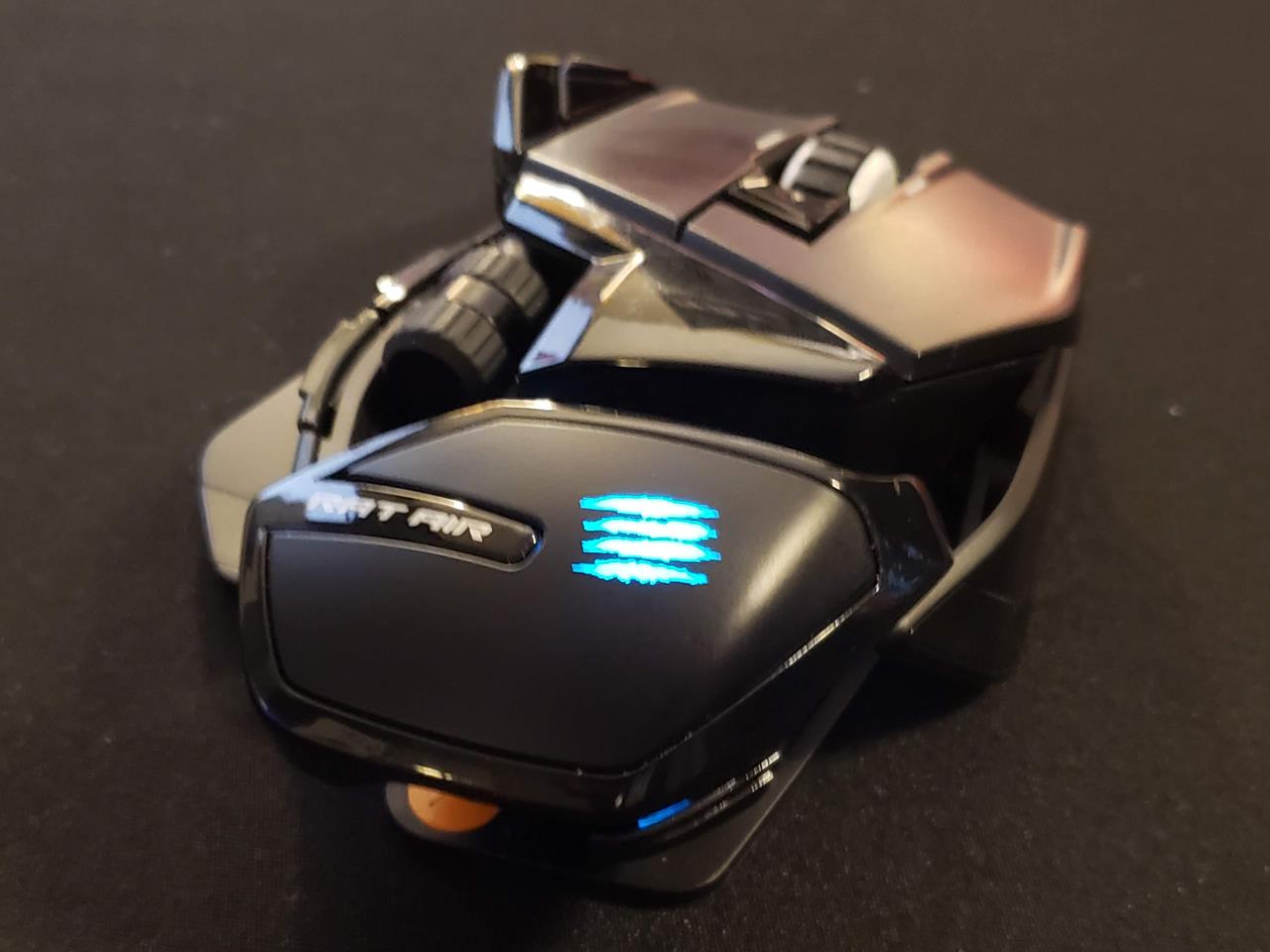 Moving to headsets, the F.R.E.Q. 4 has 50mm drivers and will offer a virtual 7.1 surround sound setup. It's got spring-loaded headband and a retractable mic. For those that want color, the F.R.E.Q. 4 also has RGB lighting and can connect to your PC via USB. It's due out early 2020.

S.T.R.I.K.E. 13 is their latest keyboard featuring Cherry Red switches and RGB lighting.  The keyboard had a nice feel to it and I enjoyed typing on it without the overly loud clicking sound that some other switches make. Each key is individually lit and as you can tell from the picture, it can get pretty colorful.

Mad Catz is going back to producing game controllers and fight sticks  for 2020. C.A.T. 7 and C.A.T. 3 have OLED displays that aid in programming macros and the ability to store profiles. With the C.A.T. 3, you can use it with mobile devices as it will have both 2.4GHz and Bluetooth wireless abilities. 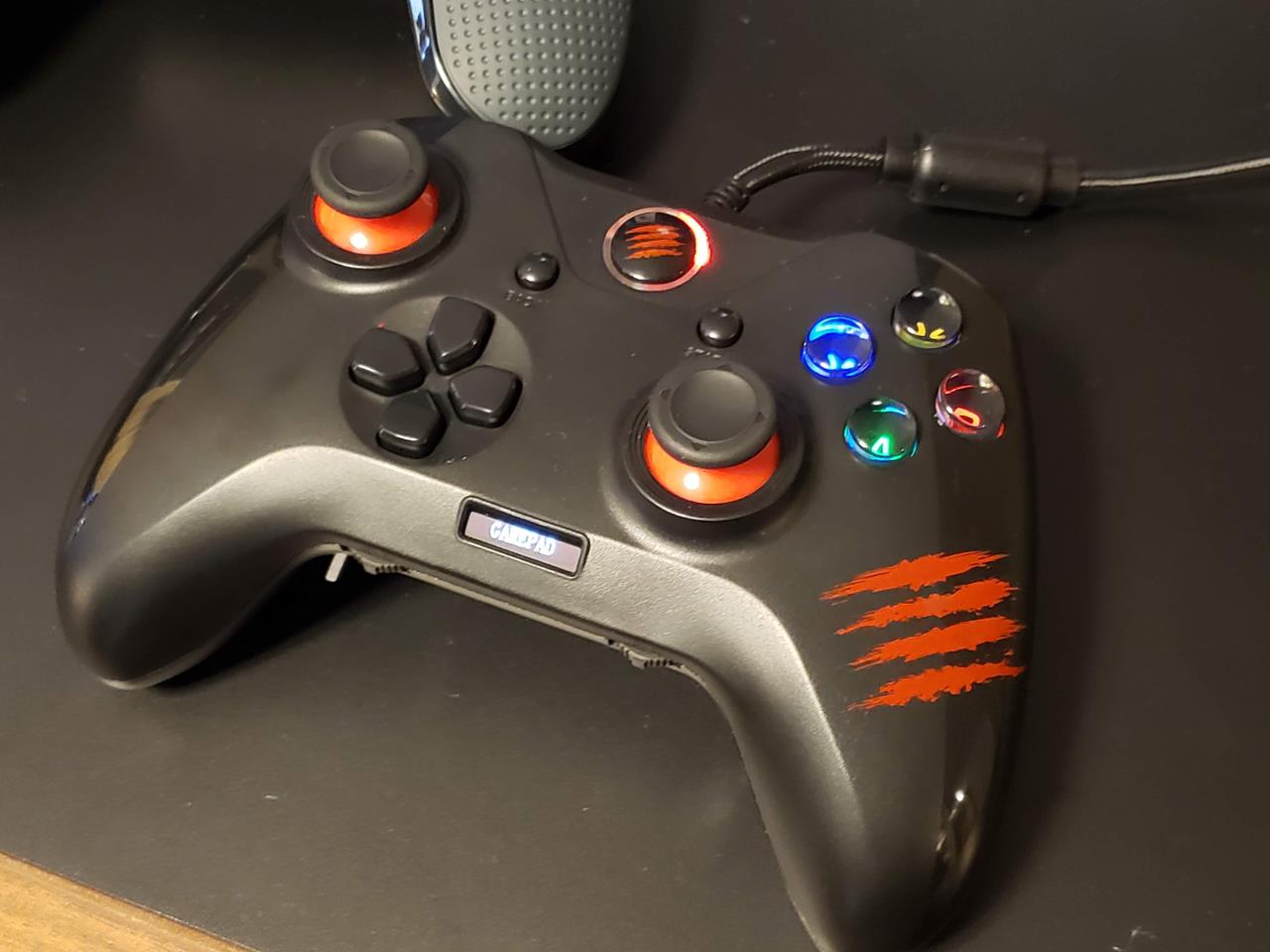 Finally, the  E.G.O. fight stick looks to put Mad Catz back into the fighting ring. We got genuine Sanwa parts in this with an eight-button layout along with an eight way stick. If you want to customize the look, the E.G.O. will let you have customizable faceplates. It felt pretty solid and had some good weight to it.

Overall, it was great to see Mad Catz again and they seem to have some great products in their lineup for 2020. If they can deliver on the mice, keyboards, headset, and controllers, we'll have a great feel good story on our hands with a company coming back from the brink.