As always, NVIDIA has a swath of new information coming out for CES. From new displays, new driver features, and new G-SYNC compatible products, NVIDIA delivers a bunch of goods for gamers to get excited about.

Size wise, it's a 24.5" display with thin top, left and right bezels and a 1080P resolution. This monitor was built for smoothness during action, not high resolution. 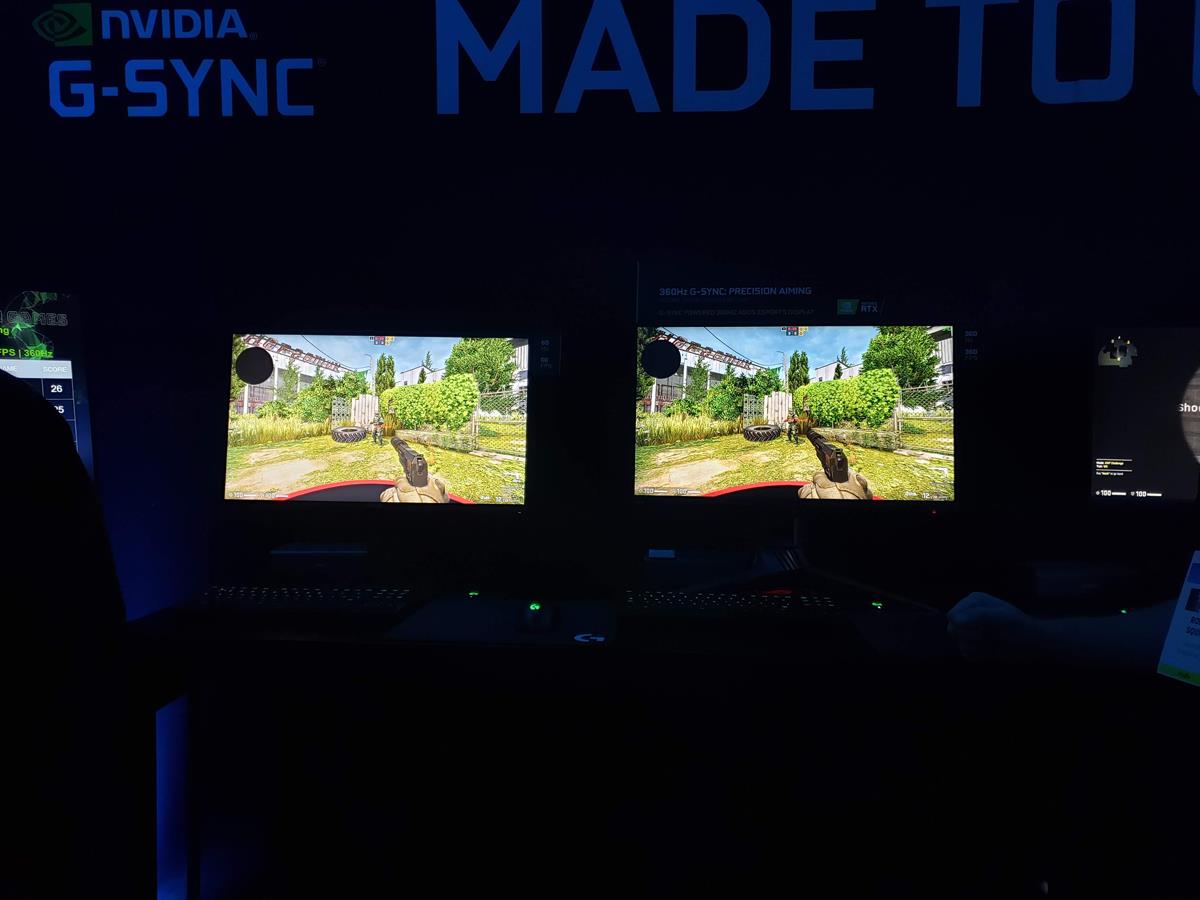 Now, this monitor is aimed at gamers that want fast, smooth gameplay. Games like Counter-Strike, Fortnite, Overwatch, and so forth. You wouldn't be running Red Dead Redemption 2 on this monitor at 360Hz.

So you might be wondering if you can benefit from 360Hz. NVIDIA setup a few demos where they had one monitor running at 60Hz and the other running at 360Hz. One test had you track a Counterstrike enemy as they weaved back and forth and you had to get a headshot on them. Each successive kill moves the enemy to some other spot around you and the cycle begins again. We did a timed test on both the 60Hz monitor and then on the 360Hz monitor. Scores increased either by a little or dramatically  depending on the person doing the test, but everyone did better on the higher refresh rate monitor. Now, I think a better test might be using a series of monitors with refresh rates of 120Hz, 144Hz, and 240Hz, but from 60Hz to 360Hz, there is a good jump in improvement in the speed of image recognition.

NVIDIA also showed off ASUS's mini led displays from Asus and Acer and boy do they get some good brightness on them when running games in HDR. Showing off a bombing run in Call of Duty, the monitors exhibited a brightness from the explosion that made me avert my eyes. It almost seemed like you could feel the blast from the bombs with how bright it was. 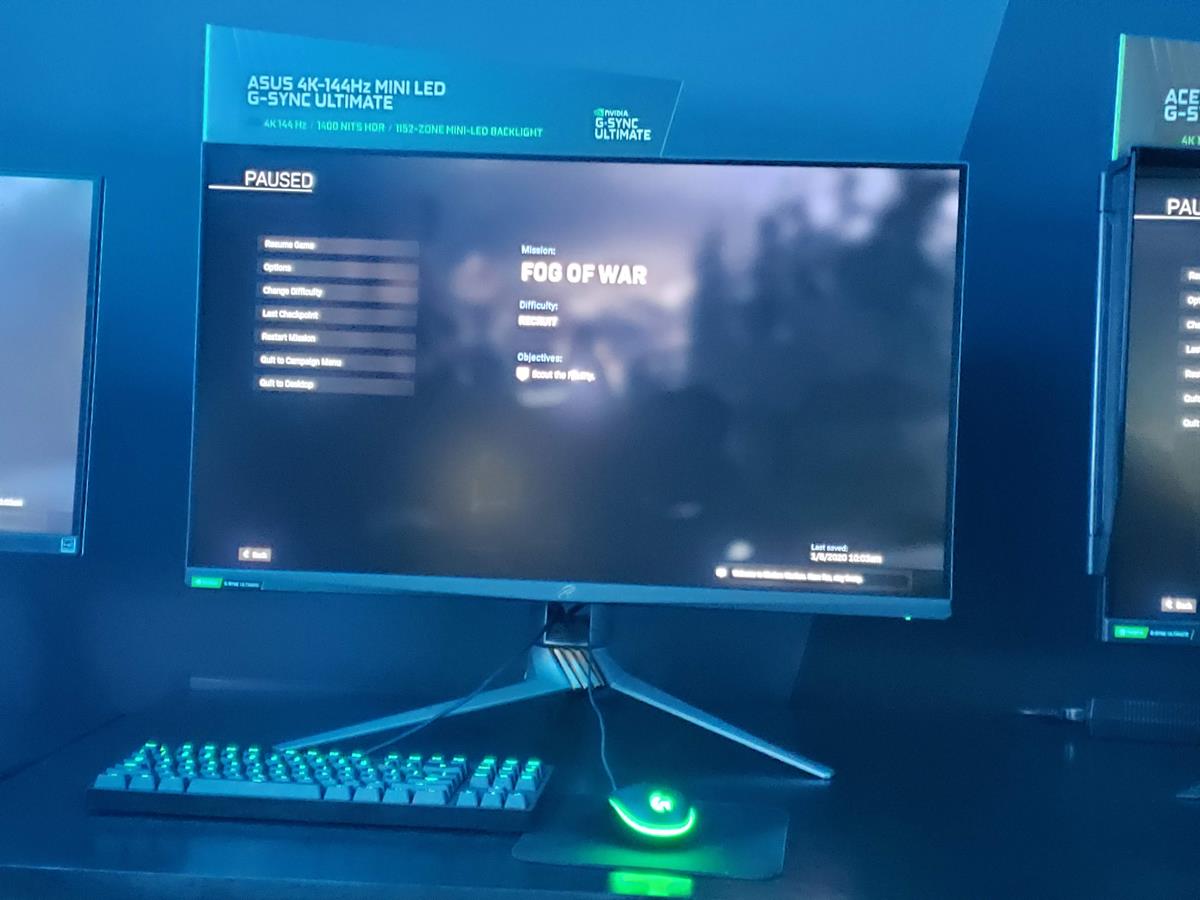 G-SYNC compatibility is coming to more LG displays. 12 new OLED displays will be coming from LG, which you can turn on G-SYNC for. These are all new 2020 displays and I, unfortunately, nabbed an LG OLED that just missed being compatibility with G-SYNC. I checked them out at LG's booth the day before and they looked awesome.

Now I'm a huge VR gamer and NVIDIA's got something for you in their next driver update. VRSS, or Variable Rate Super Sampling, increases the clarity of the center of the image. You can think of it as fixed foveated rendering. Until we get more prominent eye tracking in headsets, this might be the way to go.

With VRSS, games can increase and decrease the image quality in various regions. I can see it helping some, but for some of us who do move their eyes around a lot in the headset and not just focus in the middle, I can see this being a little more annoying.

Now, this is only available in Turing cards, so if you don't own an RTX card right now, you're out of luck. Also, NVIDIA has to add the game to its supported library, which means it can take time for some games to have this feature enabled.

As for games, Wolfenstein: Youngblood will be getting Ray Tracing and DLSS. Youngblood was announced that it would feature Ray Tracing, but launched without it. Now, that feature will come to light with the update this week. 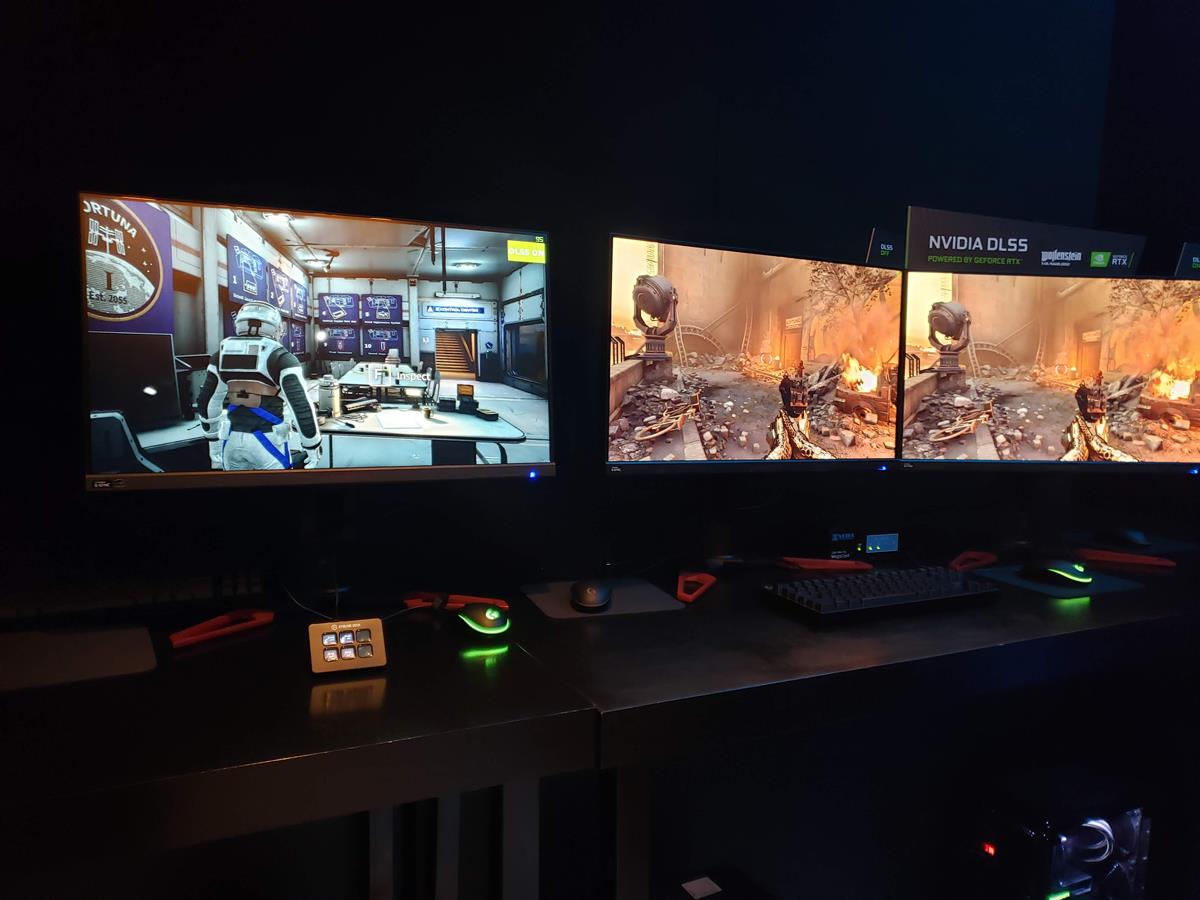 DLSS will help boost performance and when turning on many of the features with the help of AI. Quality, balanced, and performance are the three modes provided and you can switch to the one that suits you the best.

Seeing the results up close, Youngblood running with DLSS enabled looked really clear. DLSS has improved over the year and it only gets better as the AI to enable these features learn more and more.  Combine with Ray Tracing, you'll get some good performance improvement with that feature turned on.

Oh, you'll only get the Ray Tracing in Youngblood feature if you own an RTX card. Due to some bugs and issues with performance, other cards wont be able to enable this feature.

Speaking of Ray Tracing, NVIDIA had two demos at the booth that really show off how awesome the tech improves old games. Quake RTX looked much more colorful and realistic with Ray Tracing. Firing a rail gun underwater, you could see the blue light get diffused around the environment, hitting the walls, reflecting off the water. When switching between having RTX on and off, it was no comparison. The game looked bland and lifeless without it on. 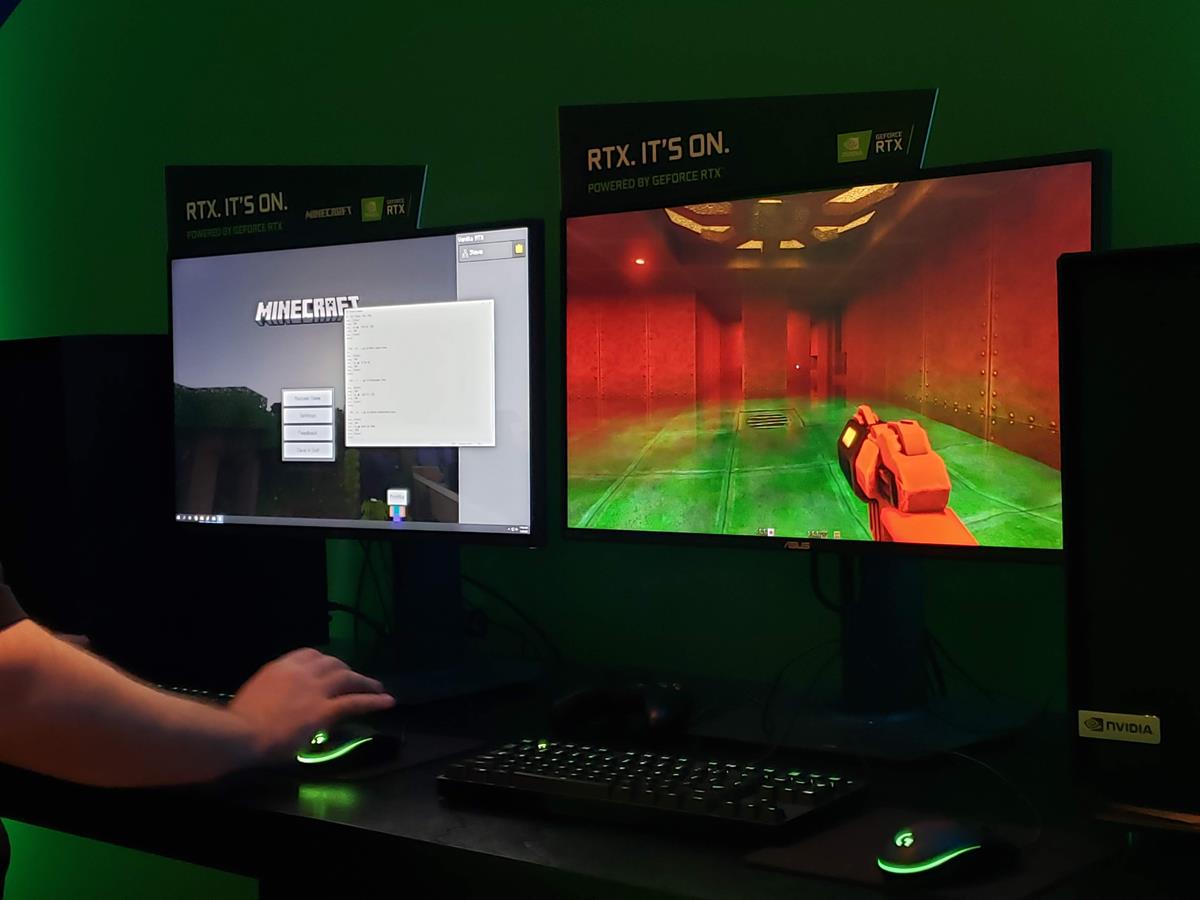 But the big improvement was Minecraft. Seeing it in person, words just don't do it justice. Water has opacity and reflections. Lights bounce off surfaces with realistic illumination vibrancy. What was a flat looking world becomes lush and vibrant when you enable Ray Tracing in Minecraft. I can't wait to get my hands on this build to see how well it looks on my home computer.

Finally, NVIDIA showed off various content creation computers and improvements that NVIDIA cards gives you to. Time is money and when you reduce time using hardware acceleration on NVIDIA cards to render your content, you'll save a lot of money. NVIDIA had some portable solutions that really show how much faster a laptop equipped with a GeForce card can render images, even over the current Macbook Pro. One of the cooler demos showed off a biker character that looked like a photo, but in fact was made up of millions of polygons. The NVIDIA equipped laptop allowed you to move around the person and showed off the polygons without slowing down too much. It was a pretty impressive sight. 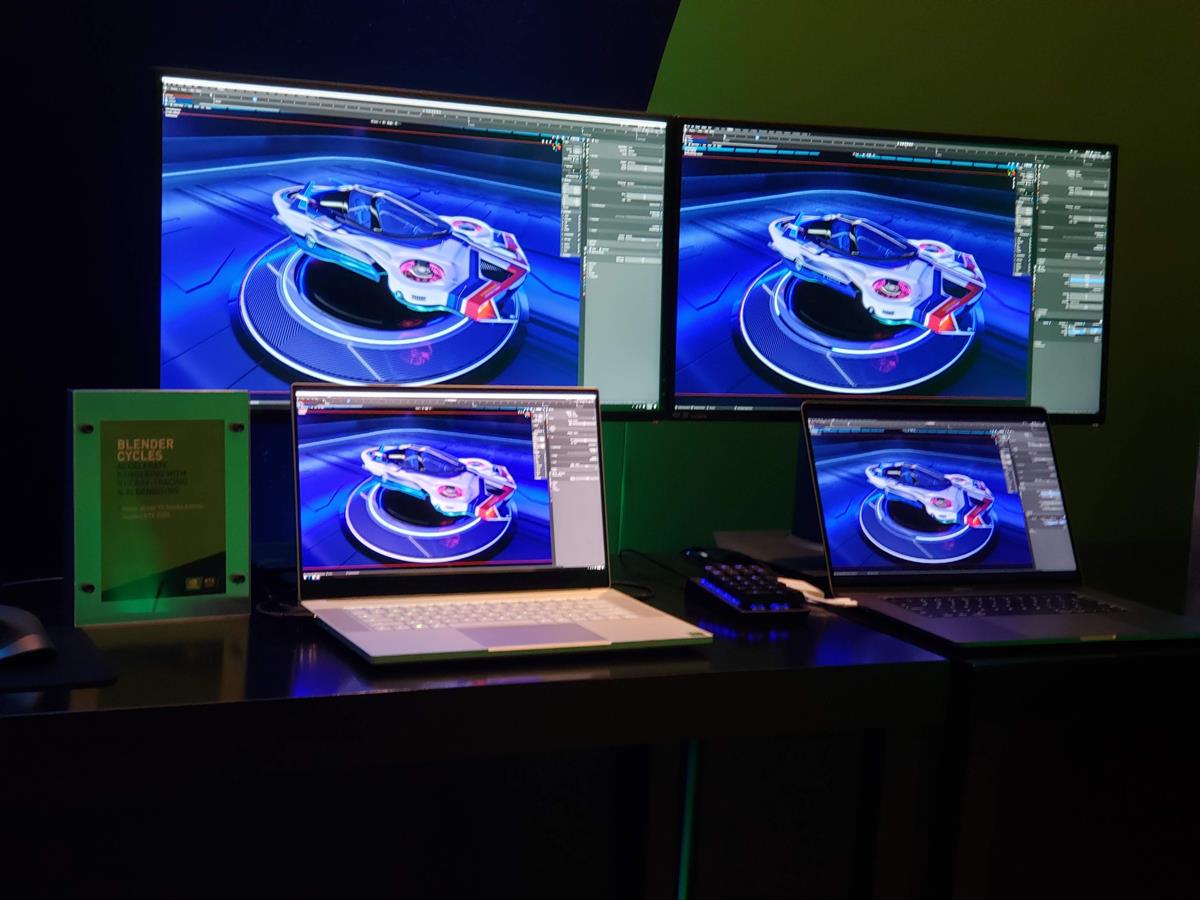 We didn't get any word on any new cards coming, but I wouldn't be surprised in a six months or so we get word on some new hardware. But for CES, they showed off what they did well currently and some new display hardware that takes advantage of their cards. That 360Hz monitor is something to keep an eye on and it was good to see more games take advantage of RTX.