It's a special time of year for FIFA 20 players. This is when the Team of the Year for FIFA Ultimate Team is announced and players scrabble to snatch up the highest rated cards of their favorite players. Without further adieu, the team:

In addition to that starting 11, fans have a chance to vote for the 12th man from the top player who didn't make the cut. Voting is done in game by selecting from the list a 1 game loan player for your squad. You can see the players in that vote in the screenshot below, the big name on the list certainly being Cristiano Ronaldo. Amazing to think CR7 missed the team of the year. Personally I kind of love it because I've always recognized the truth that Messi was better; and can you honestly say Ronaldo is a snub when the front 3 are Messi, Mbappe, and Mane? Those three had very good years. Myself, I voted for Sterling myself because he fits better with the EPL squad I'm putting together and if you only use loan players in exhibition matches you can use them indefinitely. Even a one game loan won't expire as exhibition matches do not use contracts up. Pro tip right there.

The FUT Team of the Year is available now in card packs as rare players. The odds of you actually getting one in a pack is basically zero, so please don't spend real money thinking you're going to hit the lotto in FUT. You're better off playing the actual lotto. But do dump all your coins you've earned in-game and may the odds be forever in your favor. 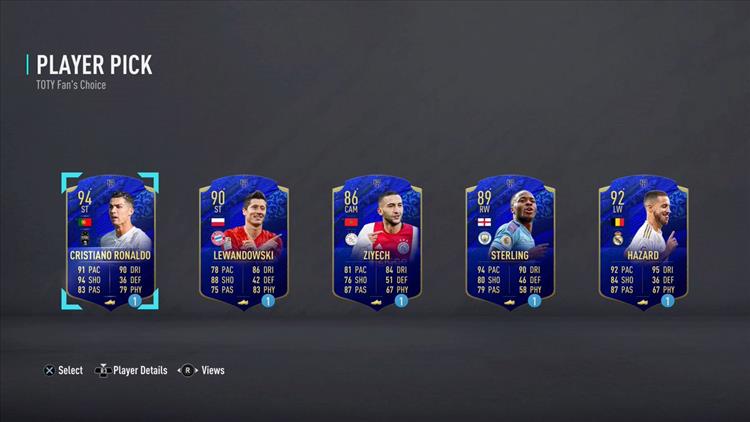