Citadel: Forged With Fire now available on PS4, Xbox One, and Steam

A couple of days ago Blue Isle Studios launched Citadel: Forged With Fire on the PS4, Xbox One, and PC. Citadel: Forged With Fire is a sandbox-style game where you can spellcast, build, explore, and partake in inter-kingdom conflict while crafting your own spells and taking on "fantastical beasts" (if you know where to find them). Judging by a few things I've seen it seems that the first couple of days after launch have been a bit rocky, but here's hoping things will improve as the game seems like an interesting concept.

CITADEL: FORGED WITH FIRE AVAILABLE NOW ON XBOX ONE, PLAYSTATION®4 AND STEAM 1.0
Enter a World Woven With Magic, Master a Powerful Broomstick, Tame and Fly a Dragon to Conquer Mythic Enemies and Become a Ruling Wizard Amidst an Epic Conflict

TORONTO, CANADA – NOVEMBER 1, 2019 – From the creators of horror sensationSlender: The Arrival and action-adventure Valley, comes magical open-world RPG Citadel: Forged With Fire, available now in retail and digital stores for PlayStation®4 computer entertainment system, Xbox One, and Steam 1.0. Set in a vast world filled with wizened wizards and fantastical beasts, Citadel: Forged With Fire is the ultimate magical sandbox game replete with spellcasting, building, exploring and inter-kingdom conflict where destiny is in the hands of the player.

Take hold of your first broom, get a bit of Faerie Dust from sprites and achieve the power of flight. Battle legendary monsters and plunder mysterious, treasure-filled caves, then ride enchanted dragons to rain fiery death upon your enemies! Your goal? Create a name for yourself and become one of the land’s ruling Houses.

“There is so much to do in Citadel as players can craft their own spells and control the magic that is woven throughout the world of Ignus. We spent two extra years developing the game alongside the community and pouring in more content,” said Alex Tintor, founder and CEO, Blue Isle Studios. “Head in game to lead giant raids with friends, tame and fight fantastic creatures, craft custom spells, clash in epic PvP battles and build a massive kingdom to fortify and defend. Each time you log in, a new adventure awaits.” 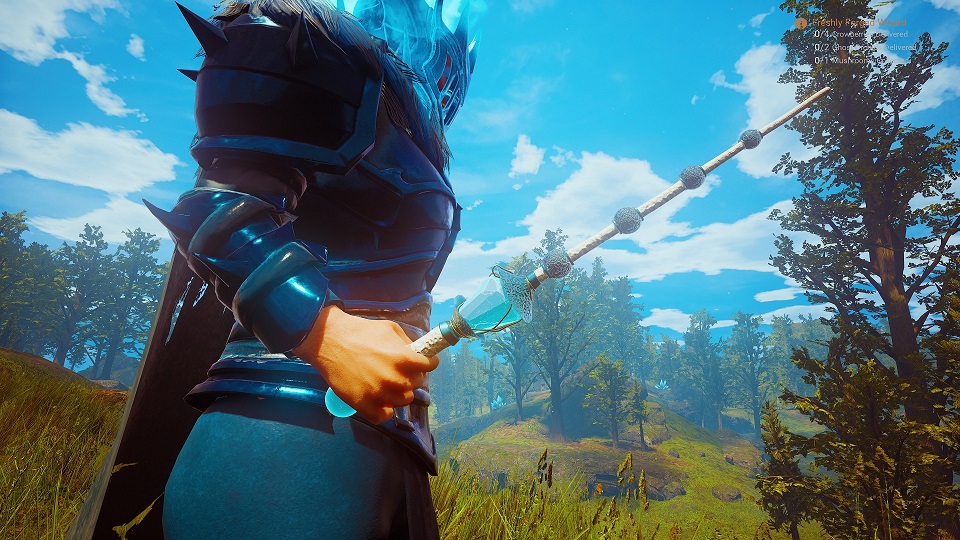 The Digit of Orcus wand features powers from a disturbing demon, a useful weapon for warding off enemies from afar

Citadel: Forged With Fire is available now worldwide in retailers and on digital platforms, for PlayStation®4, Xbox One and Steam PC, priced at $39.99. The game is rated “T” (Blood, Violence) by the ESRB.
Chat with the devs and fellow Wizards on Discord. Band together with fellow wizards and learn to become a master sorcerer by following @PlayCitadel on Twitter, ‘Like’ the arcane arts on Facebook and visit CitadelTheGame.com for more information.

ABOUT BLUE ISLE STUDIOS
Founded in 2010, Blue Isle Studios is an independent video game developer and publisher located in the heart of downtown Toronto, Canada. Lead by industry veterans Alex Tintor and Brenden Frank, Blue Isle has established itself as one of gaming’s most exciting developers, creating iconic titles that have sold millions of copies worldwide. A small yet passionate group of artists, designers and programmers, Blue Isle works to build captivating virtual worlds, delivering the best gaming experience possible no matter what the genre. www.blueislestudios.com.