Correlation doesn't imply causation, we know, but Donald Trump joined Twitch and one of Twitch’s #1 games turned into a black hole there for a minute. Fallout from #BoycottBlizzard continues, while video game companies warn pro players and staff to not talk about politics. And Outside magazine asks if video games can replace the outdoors. 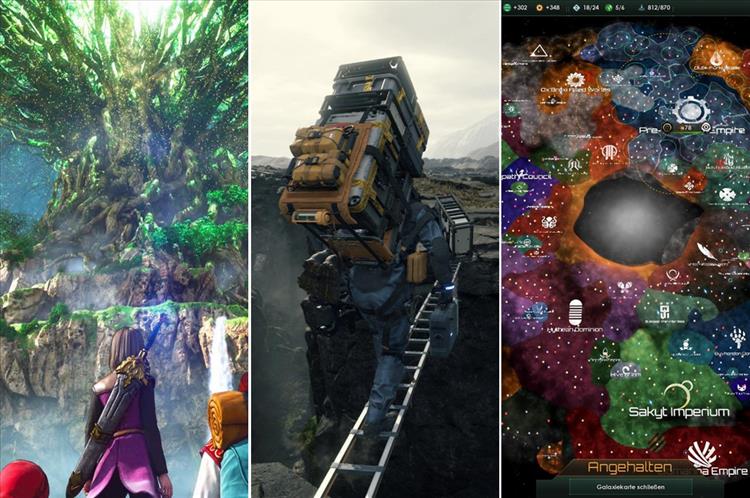 Sean Colleli
Video games replacing the outdoors. Alarmist fluff. The dearest VR rig can't even come close. And that ranch sounds like a scam bilking people. Gaming is like anything: people who are running from something can use it as a place to hide. There are less financially ruinous ways to get back into a healthy rhythm.

I just dislike the condescending tone a lot of these articles are written in.

Eric Hauter
While waiting for another game to download yesterday, I dipped my toe back into the post-game of Concrete Genie. I knew that I would be able to go back into the game to run around and create more artworks on the wall of my city by the bay, but I was surprised at how much real gameplay was left when the story ended. No, there aren't any real quests, and the story doesn't continue. But there are an awful lot of secrets to be discovered, and collectibles still floating around (some of which require some real brain-power to reach).

I'm going to go ahead and do some trophy clean-up on Concrete Genie, stopping short of actually platinuming the game (as I do). After a week or so away from the game, it felt good to slip back in and revisit my handiwork.

I've also started playing the 10-hour demo of Dragon Quest XI on Switch. I know that this will eventually lead to me buying the full game. I don't wanna talk about it.

Charles Husemann
After nearly a year of grinding characters, I finally have the pieces necessary to unlock Jedi Knight Revan in Star Wars: Galaxy of Heroes. That's right, almost a year of grinding to get the necessary characters needed to unlock the meta mandatory character from the Old Republic. I've had a few detours here and there, but this character will unlock the ability to spend another six or seven months grinding character shards so that I can unlock Darth Revan which will give me the ability to spend more time grinding so that I can use both Revans to unlock Darth Revan. I could spend money to decrease the time but where's the fun in that?

After that I'll be spending some time with BLOPS 4, Diablo 3, and possibly the console version of Stellaris which just hit Game Pass.

Randy Kalista
I'm allowed to say exactly two things: 1) We have Death Stranding, and 2) our review goes up November 1. Wish I could say more, but Kojima's non-disclosure agreement ain't playin'. I mean, I've been assigned to U.S. military bases with experimental weaponry that were treated with less secrecy.

All that aside, I'm heading back into Control's Brutalist paradise—if that's even a phrase—so I can break out the in-game camera for the newly added photo mode. Photo modes are the definition of criminal entrapment for people like me. Especially when a game's architecture and environments are as bold and beautiful as the Federal Bureau of Control headquarters. Brutalist architecture is meant to be top heavy and authoritarian and oppressive. Who knew it could be mesmerising and transportive, too?

And this is only tangentially video game-related, but our Slack D&D group is gaining momentum. Not that we're superstar role-players like the McElroy family or as beautiful as the cast of Critical Role. Well, maybe Eric is those things. But throwing dice and hitting the books really brings to light how lazy video games have made me. (And I say "lazy" in the nicest way possible.) So much happens behind the curtain in a video game RPG that is wholly raw and exposed in a tabletop RPG. Anyway, here's to hitting the books again. I haven't tried being a real dungeon master in probably 25 years.