GTA Online turned six and I played it for the first time ever—it's not bad!

Yesterday was Grand Theft Auto Online’s 6th birthday. I played it for the first time ever. Hadn’t even bought Grand Theft Auto V until a couple days ago, so this is my first foray into a GTA since 2008’s Niko Bellic immigrant ballad, GTA IV.

I only played vanilla GTA V long enough to drive Lincoln to the barbershop and get him looking like a ‘93 Ice Cube. Fool, You Know How We Do It. Everything feels just fine in GTA Online, control-wise. I kept looking for a handbrake button on the car so that I could drift through intersections, but I haven’t found one. I stumbled across the tuck-and-roll maneuver while looking, though. I’d forgotten just how easy it is to jack cars. Makes sense, I suppose, considering the name of the game is Grand Theft Auto. But it’s so quick and painless, as natural as shooting is in a first-person shooter. It’s like calling Halo or Call of Duty the Pull the Trigger series. Thefting autos is just that easy and inherent to the flow of gameplay in GTA.

After carjacking, robbing mini-marts is the second most natural motion in GTA Online. My mentor in the tutorial, Lamar Davis, who looks like Jay-Z before the Jigga, taught me how to pull a 211. What my mentor, Lamar, didn’t mention, however, was that you don’t turn your back and run out of a store—unless you want the back of your head full of buckshot, that is. My subsequent robberies kept my gun trained on the cashier the entire time, until I pushed my way out the door. Then! Then I make a break for my black-and-tan Imponte Ruiner (the one that imitates my childhood dream car, the IROC-Z Camaro).

I took my ill-gotten wealth and headed for a clothing store. I quickly learned that most pieces of clothing cost $10,000 to $20,000 more than I had in my pocket. I’d have to knock off a few more Quickie Marts before I’d be pimping that grandpa fur jacket. I snagged a brown leather suede jacket and baggy enough jeans to give away the fact that I’m a ‘90s kid. I’m only vaguely concerned that the type of eyeglasses I wear have both the words “tortoiseshell” and “enema” in their name. I wanted to look more Starsky & Hutch, but left the store looking more Cagney & Lacey. 1970’s clothes are affordable, but it ain’t like TMZ is hitting me up for fashion do’s.

Whatever. I was still broke after that visit to the clothes shop. Making money is the means, but looking good is the ends. So, in this era of threatened government regulation over loot boxes, I drove down to GTA Online’s new casino with Kendrick Lamar’s “A.D.H.D.” bumping on the radio. Thank God it’s early Kendrick. His late-stage jazz rap doesn’t speak to me.

At the casino I was given a VIP tour. Dude gave me the rundown on a resort home I couldn’t afford, and told me a bunch of other stuff that got lost in the diamond waterfalls and icy LED lighting. I handed over my last $500 to become a member, which I think was required, though I’m unsure. I walked over to the Lucky Wheel because it was the first thing I saw, spun it, and won its highest cash prize, $50,000.

Not bad. But, to be honest, I don’t have a gambling bone in my body, so I walked out and headed back to the clothing store. Like the great rapper-philosopher Big Boi of Outkast once said, “It’s not what you make but how much you spent.” So I took $22,000 of my gambling win and bought that grandpa leather fur jacket. It’s like I said, money is only the means.

Also, look at this handsome devil. This is what you dress like (before you win a $50K shopping spree), and it's what you look like if, on the "heritage" section of the character creation screen, you make your mom a Filipina and your dad John Marston from Red Dead Redemption. It's quietly hilarious. Forget the 1,001 sliders jammed into every other RPG's build-a-character screens. Adjusting your player-character's looks based on your parents is a brilliant mechanic I absolutely wasn't expecting to find here. 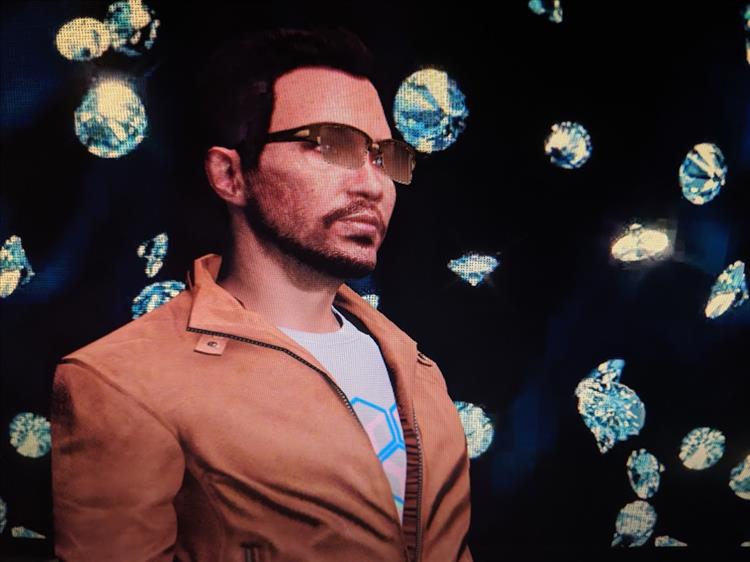