The Witcher show can stand on its own without having to be the answer to Game of Thrones. Inspired by Crazy Taxi, a teenage girl left home and traveled 10 cities in 18 days. And we've all heard how it's a security risk, but the best use of FaceApp's old age filter is on video game characters.

Sean Colleli
This is a tangent, but The Witcher absolutely does not need to be the next Game of Thrones. The Witcher is its own thing with a very different story structure and a distinctly Polish take on fantasy mythology. Trying to turn it into GOT would be a hamfisted insult to The Witcher and its celebrated game and literary legacy.

The next GOT needs to be John Carter of Mars. Before you laugh, hear me out. The Disney film was great, totally underrated, check it out. But it stripped out almost all of the lurid sexuality, brutal violence and religious/political intrigue from the books. It's basically Conan on Mars with a side of keeping up with the Lannisters. And there are 10 novels. Get some writers who know what the heck they are doing, and they could adapt those books into one hell of a fantasy show.

Oh, and I guess I'm leveling my alchemy in Skyrim on Switch, and I think I'll head back into Nightmare Reaper and hunt for some rare weapons.

Kinsey Danzis
It’s taking me roughly six thousand years to get back to Skyward Sword; my life is entirely wedding planning, caterer searching, wedding dress fitting, and wedding site creating right now, with a side of house sitting and working. I barely have time to sit down and play anything for myself. Last I left off, I had just fallen through the clouds for the first time, but I quit without saving (hey, I accidentally drank my only health potion before I needed to, so I wasn’t about to put that in a save file) so honestly, I’m not sure where I’ll end up when I reboot the game. It’s about the only gambling I’ll do.

Dave Gamble
I’m out of town all week at Oshkosh for the annual massive week long fly-in and without any gaming hardware, but I did spend some quality time in DCS. I learned that I have been fighting the Huey all wrong. I was basically working as a one-man crew doing all of the flying and shooting, despite having a co-pilot and the option to carry two door gunners. They were basically just ballast and/or meat shields to catch bullets that might have reached me. As the only one doing the shooting, I could only fire at targets directly in front of the chopper. My first discovery was how to map the keys that tell the door gunners that they’re free to shoot—being able to map key presses to the HOTAS is critical in VR. Having those guys engage ground targets while I concentrated on just flying the chopper was an incredible contribution to actually surviving a mission now and then. Having had success with the door gunners, I tried to learn whether or not the co-pilot could help out as well. That changed the way I will fly and fight the Huey forever. As it turns out, the co-pilot can aim a pair of machine guns simply by looking at the target! It’s hard to express how insanely fun that is, and I’m inherently lazy, so you’ll just have to imagine it. Or, I guess, check out some YouTubes. Trust me, it’s a life-changer. As amazing as Oshkosh is, I kinda can’t wait to get back to DCS.

Charles Husemann
I've been spending some quality time with Torchlight II the last few weeks and I think the end of the game is finally in sight. The game itself is a blast and it has a ton of character. I mentioned the Goonies level a few weeks ago and this week I discovered a Fire swamp replete with creatures that appear to be giant rodents. I'm sure I've missed some other references as I've been having a ton of fun despite having to slog through a few areas where I was a bit under leveled.

I will be doing some traveling over the next week or so, which means dusting off the Switch and hoping that I can remember where I am with Dead Cells. There might also be some Mario Kart and Mario Party with the family but we'll see how that shakes out.

Randy Kalista
I've turned Skyrim into a walking simulator. Slowing down has refreshed my view of The Elder Scrolls. Sure, Skyrim is still a dangerous place and I've got to deal with random and scripted encounters like everyone else. When a dragon shows up, everybody's running (whether engaging or disengaging combat). But walking everywhere else—at a voluntarily over-encumbered speed—changes a lot of things for me. I look for that steady midpoint on my gamepad's analog sticks. I pan the camera around with the care of a movie director. It's committing to memory things that were, at best, duly noted and disregarded.

Motorsport Manager 3 is in no way, shape, or form, my usual kind of mobile game. But it sure is now. First off, I know nothing about motorsports beyond a brief but intense affair with Grid back in '08. Now in MM3, I'm managing two racers. My lead driver has a 2 out of 5-star rating. My second driver is a 1 out of 5. Gotta start somewhere. I've built a new brakes facility. I've researched new front splitters to both cars. I've signed sponsorships that have been mocked on in-game social media. I've even seen ways to use my growing influence to steal car parts from rivals. It's wild. The only real double-take I have is when the construction crew builds some addition to my HQ and then tweets out, "Gizza shout if the hot water's not coming on, like." I know the devs are from Surrey, England, but I have no idea what cowboy movies they're watching in order to come up with those speech patterns.

Carter Kilmann
Can you smell it? Whiffs of it linger in the summer air. You can almost taste the cheap beer and charred, store-bought hotdogs. Football draws near. A mere 29 days stand in the way.

Without fail, around this time every year, I relive the glory days of college football gaming. I power up my archaic Xbox 360—who hums like an industrial-sized sir conditioner—and immerse myself in NCAA Football 14.

I don’t even want to know how many hours of my life I’ve put into this game, not to mention the series. Despite the fact that NCAA 14 recently turned six years old, I still can’t break my obsession with it.

For that very reason, I’m also anxiously awaiting the release of Maximum Football 2019, which has promise to be the worthy replacement I’ve been dreaming of for years. September cannot come soon enough.

On another note, but relevant for “So, what are you playing?” I made a momentous life decision a week ago today. I decided that my corporate job was no longer in my best interest. Leading up to that point, my work life balance was nonexistent and led to personal life restrictions.

It was time to make a change.

Now, I am writing full-time and living the self-employed life. I knew it was the right call then, but after only a week, I’m even more sure of my decision.

So what am I playing? Whatever I want, 'cause I make my schedule.

Nicholas Leon
I completed God of War (2018) not too long ago. I can still play the post-game content, but I sunk a lot of my energy into that game in such a short amount of that I think I’d just like to take a break from single-player gaming for a bit. I mean, it’s not like there are a ton of perfect 11 single-player games out there. I mean there are, but I don’t want to devote too much of my energy to them at this point. Right now I’m also at the penultimate point in Spider-Man (PS4)’s story, but I’d rather just do the side missions so that I can level up as much as possible.

Luckily, however, Battlefield V is finally getting some new maps, so I’ll be able to play them this weekend.

John Yan
With my vision clearing up, I'm going to go back into the VR world and use my Valve Index to take on some gladiators in Gorn and explore the world of Skyrim. I could use a fun companion, so I'm going to seek out Cicero to travel with me.

Also, 7 Days to Die is on the plate as I continue with my base that'll hang off the edge of a trader. While I wait for the next patch, I enjoy doing fun experiments like these to pass the time. I'm still mad at the game, though, as I had to restart—and the trader I found in this reseeded world is not nearly as good of a location as my previous save. 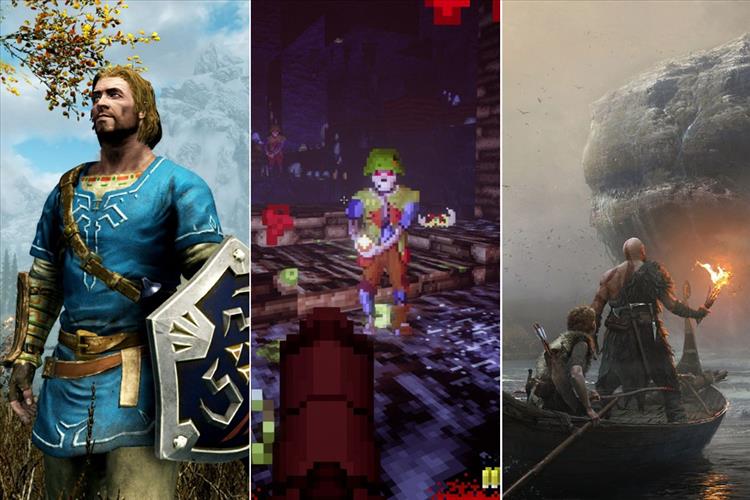