Limbo and Inside dev, Playdead, has been hiding concept art for its next game in job listings. You can watch the Stranger Things cast play their own video game. And Iowa State University isn't sure why being told to play Minecraft made people less creative than those choosing to play Minecraft.

Kinsey Danzis
I’m staying mum about my experience playing Sea of Solitude until my review is up, but in the background my colleagues and I are trying to kick our book into gear. Hopefully that’ll mean divvying up our subject matter (video games and history, of course) into distinct topics to which we can assign games, so it’s safe to say that I’ll be hopping in the time machine to revisit some oldies. Until we nail those down, though, I’ve started playing The Legend of Zelda: Skyward Sword, because apparently there isn’t enough on my plate between work and writing and reviews and wedding planning and...well...everything. Nobody said I had to play the Zelda games in order—and who’s to tell me what the order is, anyway? I can put those games into whatever order I want and even Nintendo cannot set me straight, so help me, for they have retconned their own series of events and have as such forfeited their right to their authority and placed the entire timeline—nay, the entire universe—into our waiting hands, leaving the hundreds of Hylian lives hanging in the balance because Link won’t stop trying to glitch out of the known bounds of the universe.

Dave Gamble
We came back from our glamping trip a day early, ostensibly for routine household reasons, but my hidden motivation was the fact that I am tired of all of my PS4 games. I spent quite some time thinking about what I want next—my game budget is highly curtailed these days and every purchase must be carefully considered. There are bargains to be had, though, and I think I picked a winner: Hitman. I briefly considered Hitman 2, but no small number of reviews suggested that the improvements over the lower cost original weren't worth the additional dough. And, of course, there will be time to pick up the newer version once the price inevitably goes down. There will also be a need: I had planned on getting the PS4 version for use with the RV's console, but there was a Steam sale going on, and I'm not known for my staunch resistance to sales, and patience is the least of my virtues, so...I'm playing it on the PC.

It took me two hours to get through the tutorial. Generally that is simply an indication of the same innate impatience that got me playing it on the PC in the first place—I am horribly bad at games that reward patience and punish the opposite. Now to be fair, the tutorial is advertised as "free form," which I now know means that you aren't going to be led around. There is an intended path to be taken through the tutorial, but as with what I've seen of the rest of the game, there are other ways. Sadly, the other ways I chose led to my untimely demise. Every single time. YouTube showed me the way, and I was able to get through the second tutorial, albeit in the same manner Tom Cruise got through that movie where he just keeps getting killed, but repeats the process enough to finally put together a plan that works. It also helped that there is far too much hand-holding, although that might just be because it was a training mission. I'm just starting the first real mission and it the "just follow the prompts" behavior persists, I'm going to have to take a look at the settings to see what can be done about it.

Oh, and I really hate that it's one of those games that require me to disconnect all of my other gaming peripherals in order to use the keyboard because it senses them as valid inputs—that causes all kinds of havoc. I do very much wish developers would be more careful about that.

Charles Husemann
I ended up passing on Sea of Solitude last week after watching a few streams of the game. I'm not sure if it was the streamers themselves or the gameplay but the game didn't seem like my cup of tea. Instead I ended up firing up the remaster of Batman: Arkham Asylum that is now available on Xbox Game Pass. John has raved about the game so I'm going to sink some time into it this weekend to see if it grabs me.

I'm also going to be digging into Torchlight II.  I rediscovered the game while looking through my steam backlog and realized I had never really invested a lot of time into the game.  What's even more amazing is how great and polished the game is. The UX is crisp and responsive and the game supports my wide screen monitor without any issues.  It looks like Runic added the ability to have a headcrab as a pet so that's what I'm going with and of course I named him Gordon to stay on brand.

Randy Kalista
Someone in our Gaming Nexus Slack channel said we'd better spend those Steam Summer Sale Grand Prix Token Things before they disappeared. I stumbled through the door at 9:50 a.m. for a 10:00 closing time. My team, Team Cockatiel, was murdered in the final standings. There would be no free games for us birbs. I threw my Wishlist into lowest-price-point first. I already had three "overwhelmingly positive" free games at the top of the list, but that's not why I was there. I was there to burn tokens, put this train wreck of a Steam meta-game behind me, and complement the Divinity: Original Sin II antidote for my isometric RPG hate. I now had five minutes left.

I'd gotten Tyranny from Xbox Game Pass, so I struck that from the list. EITR isn't out yet, even though I'm drooling over that Viking-bred pixel art. Boyfriend Dungeon literally says "When weapons are beautiful enough" for a release date. Developers can say that? I had two minutes left.

Here we go: Tower of Time. Not sure they could've come up with a more forgettable name, unless it was SEO'd to death as a Clash of Clans clone on Android. But for the past week, I'd been pulling up videos of Tower of Time's isometric (good) slow-mo tactical (great) computer role-playing gaminess (perfect). Doesn't hurt that the art department sports a better depth of field than any other cRPG I've seen to date. What I mean by depth of field, is that when taking length, width, and height into consideration, these levels are deep. Labyrinthine dungeons falling away into the background. Cliffhanger stories that are told via hanging cliffs. And giants so enormous it feels like their feet are lost in the fog of war. I need this depth of field, since flat-planed isometric level design makes me feel claustrophobic.

Click, bought it. At the buzzer. Fifty percent off sale. Plus five bucks off from Murdered Bird Steam Tokens. Another 73 cents off from the sale of Steam Cards or whatever. Who are these people buying Steam Cards? I don't even care. Thank you for your service. For all these reasons and more, I'll be running counterclockwise up the Tower of Time this weekend.

Rob Larkin
I’m on my second weekend away from PC and consoles while on vacation. So I won’t be playing anything outside of mobile games. I guess that means a lot of Fire Emblem Heroes and The Elder Scrolls: Legends unless anyone has any suggestions of hot new mobile games I should try? 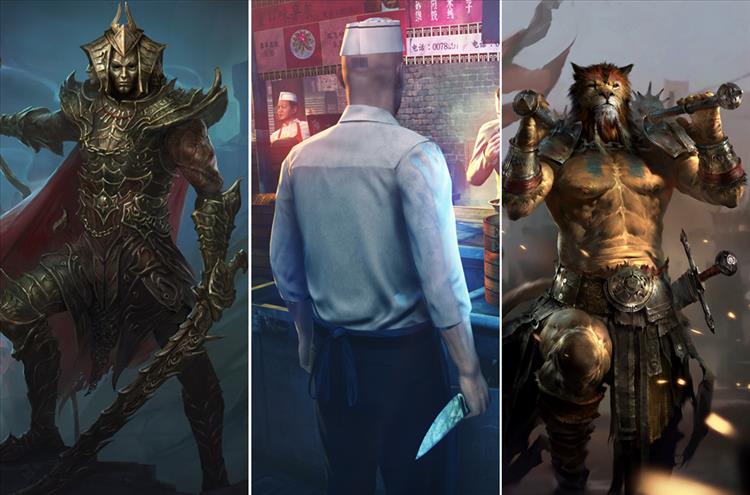