Microsoft relinquished publishing rights to the coffee Thermos-collecting Alan Wake series and handed it back to developer Remedy. In addition to seeing Geralt from another angle, Netflix gives us our first look at The Witcher's Yennefer and Ciri. And Esquire takes on the dangerous task of ranking 36 years of Mario Bros. games.

Happy day after Independence Day, Americans. So, what are you playing?

Kinsey Danzis
I’m playing “learn how to take care of chickens” for the next week or two, house sitting and possibly doing some writing work for a very nice couple in my area. But you know what house sitting means in Kinsey’s world: breaking out the handheld! I know I’ll mainly be gallivanting around in The Legend of Zelda: A Link Between Worlds and trying to get some of those Lost Maiamais before tackling Death Mountain in Lorule. It’s my latest task in my quest to play every canon Zelda game before the Breath of the Wild sequel comes out (which I know I have time to do, it’s just the console restrictions) and I can honestly say that it’s my favorite so far behind Breath of the Wild itself. Ocarina of Time is a classic, and Majora’s Mask had just the sort of creepy vibes that I love, but I’m having so much fun chasing Yuga’s stupid outfit and his two-dimensional paintings (dude, take an art class if you think that's perfection) in A Link Between Worlds that I can’t get enough.

Dave Gamble
We're out and about in our rolling tiny house, so that means it's the PS4 or nothing. For any trip longer than just a couple of days, I prep well in advance by choosing which 3 or 4 games I'm going to load up—more disc space is an expense that I could not quite sell as "camping equipment." Easy decision this time around—the Formula 1 season is well underway, but heading towards the mandated summer break. I've got to get caught up with as much of the F1 2019 season as I can. I have a long way to go—despite setting race length to just 25%, I can't seem to get through a race without wrecking, or being wrecked by an over exuberant AI driver. I'm still in Bahrain (second race), whereas the real F1 circus is due to race in Britain (tenth race) in a couple of weeks. If worse comes to worse, I may demote myself back down to Formula 2 which, frankly, I ought to do anyway simply for the sake of the experience. Or, as a last resort, I could turn on an assist or two.

There is a innate problem with F1 2019, though, and that is its laser-like focus on...F1. There are times when I prefer to forgo the pomp, circumstance, and (let's be honest) fairly hard to drive cars of Formula 1 and spend some time in what I have coined The Attainable Racing League. It's a league of precisely one driver and a bunch of AI, racing in cars available for under $100K (which is a mockery of what I could actually attain: the Walmart Electric Shoppers Scooter League, Senior Class) on tracks that are within a two day drive of my home. This calls for Project CARS 2. Having solved my inability to come to grips with the game controller by the simple expedient of using it as a motion controller, PC2 has finally come alive for me on the PS4.

Charles Husemann
Gaming time this weekend will be fairly limited but I'm hoping to check out Sea of Solitude. The game caught my eye when it debuted at E3 last year and I'm interested to see how the final game plays out.

Randy Kalista
I sat there, exhausted from another hour of my kid's screen time going toward Skyrim god mode cheats. I'll admit the Honey, I Shrunk/Blew Up the Kids-like mod she'd just found was more entertaining than most. But nostalgia for good ol' Peter Molyneux's Fable got me during the Steam Grand Prix "Go Team Birb" Summer Sale. Fable Anniversary, rather. A 10-year-anniversary remake that's already a five-year-old game itself. "Can I be a girl in it?" my very pro-woman-protagonist daughter asked. "No," I said, "but I think you can wear a dress?" She gave me a weird look.

Thanks to a generous staffer (thanks, Dan!), I got a Steam key of 911 Operator off his last Humble Monthly. He knew he was going to skip it, and he also knew I work at the Fire Department. I'm an office jockey, not a firefighter, so, in reality, I see and hear very little about how a 911 dispatcher's workday goes. Here I was, with police, fire, and ambulance units already stretched thin across my hometown of Medford, Oregon—you can play any city map in the world—when Dispatch got a call from a woman. Her "crazy ex-boyfriend" was at her place. I could hear the door banging and an unhinged man yelling in the background. I advised her to find a room and lock the door. She had a gun. She asked, "Should I shoot him?" I advised, "Don't shoot. Police are on the way." Next thing I know, the crazy ex-boyfriend busted down the locked door, she screamed, there was a brief struggle, then the phone line went dead. I turned to my daughter. She gave me another weird look.

Nicholas Leon
I need to get on the new map Al Sundan on Battlefield V, that’s for sure. The thing is I’ve been busy with Spider-Man PS4 and also trying to complete a game for review. Oh and that’s not to forget that it's July 4th weekend and I also have family over!

But I’ve also started God of War this week after buying it during the Days of Play Sale. Many smart words have been said about this game so I won’t waste anyone’s time with silly aphorisms I might have tucked away. But it’s definitely as solid an action and story experience as The Witcher 3. And honestly who doesn’t love Dad Kratos.

John Yan
I finally am able to see enough that I can put on the Valve Index and enjoy some smooth, buttery VR. So, I'll be checking out some titles that got the updates to enable finger tracking such as Arizona Sunshine and Blade and Sorcery. The Index is by far the most comfortable headset I've tried and the Index controllers provide such incredible hand presence for games that take advantage of it. Finally, I played a little bit of Astroneer and I'm going to wade through the tutorial again just to get more familiar with the game. 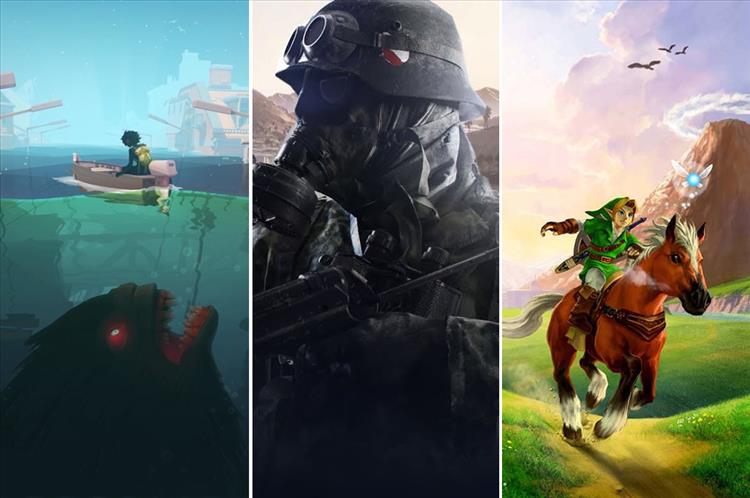