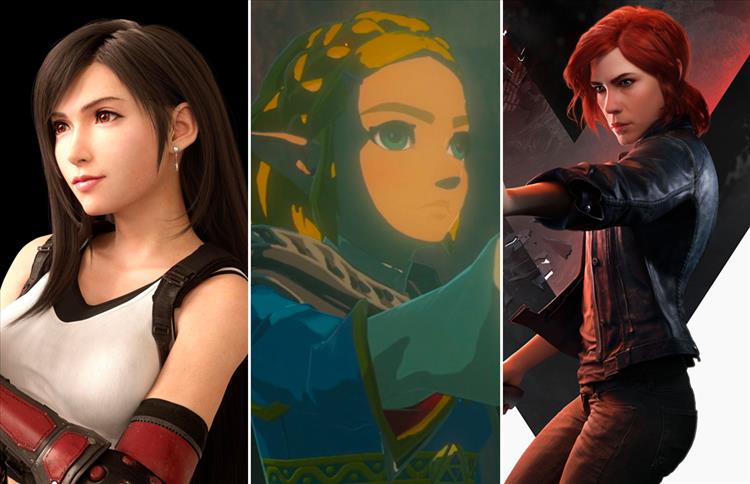 Despite its relevancy being called into question every year, another E3 conference has put on show. There are winners and losers, but it's a show nonetheless. It's honestly the only industry event that gets several of us Gaming Nexus staffers all logged into Discord and cheering—or booing—at the same time. Sony made the questionable decision to not even show up. Microsoft picked up the slack. The official E3 t-shirts booth continues to shrink. But the "See You Next Year" banner hung over the exits with a 2020 date locked in. There are lots of great-looking games to look forward to. Type "E3 2019" into our search bar and you'll find all of our coverage. While we always like to chime in with what we're playing on Fridays, this week we'll combine it with one other question:

Kinsey Danzis
I’m still down in St. Petersburg for a few more days, largely disconnected from the internet, but news managed to trickle its way back to me about the explosive ending to Nintendo Direct. A direct sequel to The Legend of Zelda: Breath of the Wild, one of my favorite games and franchises of all time? Sign me up! I’m on the hype train! This is it, guys!

That teaser gave me life, y’all. Enjoying my trip! Bah! I’m theorizing! What was that weird glowy hand keeping the mysterious man-in-need-of-a-haircut captive? Is that stuff malice, even if it looks different? That was totally the Gerudo symbol, right? So that was absolutely Ganon/Ganondorf, right? Was Calamity Ganon just the metaphysical manifestation of Ganondorf’s energy or malice (because he totally looked like he was leaking), and Ganondorf’s actual physical body was trapped deep underground? Why did his eyes glow like Demise (dramatic effect, or something more?)? What the heck is going on with the timeline at this point (and would I put it past Nintendo to make the whole timeline cyclical, meaning that the supposedly-Ganon(dorf) figure being held captive has some ties to Demise beyond what we can see?)?

I know I’m reaching. I know I’m being outlandish. But this early, when we know so little and have so much time before the game hits consoles, isn’t wild conjecture half the fun of anticipation? That, and when it comes to timelines, I wouldn’t put anything past Nintendo at this point.

Dave Gamble
We’re parked pretty much out in the middle of almost nowhere enjoying quiet RV life, but one of the downsides of deep rural is the lack of connectivity. Usually I can kill some time on the PS4 with my old Red Dead Redemption 2 friend John Marston and/or the pathetically unstylish character I’ve built up in The Golf Club 2, but I don’t always get access to a TV. That puts me back on the Android tablet and when that happens, things get desperate. This is not my first rodeo in this particular ring, so I planned ahead a wee bit by downloading some random stuff from the Google Play Store. One game in particular has grabbed my attention, albeit not for the first time. The game in question, Order Up!, is one that both my daughter and I enjoyed on the Wii, way back when being an enthusiastic supporter of that platform pitted me against the almost universal disdain of my cohorts here at Gaming Nexus. It was the motion controllers, of course, that made it so much fun. As it turns out, a touch screen works just as well. What doesn’t work quite as well is playing a cooking game in a location 50 yards downwind of where the horsemen dump the piles of manure they clean out of the stables every morning. Alas, us premier world chefs have to sacrifice for our art, now and then.

As far as E3, I haven’t followed the flood of announcements with even a scintilla of diligence, but I did see the announcement for a new Microsoft Flight Simulator, and it looked incredible. This is not my first rodeo riding this bull either, though, so I am tempering my excitement with reminders of multitudinous botched flight sims of the past. There are so many ways for them to get it wrong! Still...cautious optimism never hurt anyone.

Charles Husemann
There were a lot of games at E3 this year but three stood out to me. The first is Control, the new action game from Remedy. I loved Quantum Break. The footage of Control makes me think that they brought over some of the best game mechanics from Quantum Break and merged them with a new and interesting plot (that I'm purposely staying clear of so that I can go into the game with a clean slate).

Next up is Carrion from Devolver Digital, which they are billing as a "reverse horror" game. The game reminds me a bit of the end of Inside but with a bit more meat and more than two colors. I'm interested to see what the plot behind the game is, but I'm digging the art style and finding an opportunity to see how the final game plays.

Randy Kalista
I got suckered into exactly one E3 rumor this year: Fable IV. Hoping this year it'd make an appearance. It didn't. Eurogamer revealed early last year that Playground, makers of Forza Horizon, had grabbed the baton on the beloved/doubted/but-still-beloved open world RPG. But I get it. Who knows how long ago Playground really started production on Fable IV. If January 2018 was perhaps only early days, then there wouldn't (shouldn't) be much to show only one-and-a-half years in.

I'm back on my b.s. playing Skyrim. John put together a private server for us to play the Skyrim Together mod, actually, so John, Sean Cahill, Dan, and I got to run around the good ol' Elder Scrolls V together for a bit. Dan picked every flower from Helgen to Whiterun so there was none left for me. Sean roguishly cleaned house right under the jarl's nose in Dragonsreach. And me? Well, I was uninstalling and reinstalling half a dozen times until I realized it was the Bethesda launcher making it impossible for me to get a clean start—something you need in order to get Skyrim Together as stable as possible. It was still crashing on us every 10 to 15 minutes, but it was neat taking an old favorite and watching everyone else's avatars moonwalking and t-posing together in one place.

Okay, but probably the best moment from my E3 experience this week was actually a highlight on my nightly listen to the BBC World Service podcast. It was so quaint to listen to those British newscasters talk about the latest advances in video gaming.

To get to the specifics, the spot in question actually referred to Project Scarlett, Microsoft’s new gaming console. Phil Spencer was talking about how Microsoft wanted to change the way gaming looked and felt, and I thought it was the perfect method of speaking like you’re saying something, without actually saying anything.

In other words, a perfect strategy of contemporary game marketing.

Matt Mirkovich
In a stunning turn of events, it was Square Enix who gave a total about-face after a dismal E3 last year and gave me the most to be excited about. Final Fantasy VII Remake has a release date and was fun to play (for a 10-minute demo). The Mana Collection was available the day of Nintendo's E3 Direct. Even their MMO, Final Fantasy XIV, had a major story revelation that shakes the foundation of the whole game in its latest trailer. Marvel's Avengers may have landed with a thud, but there were so many other things that impressed and delighted that it's hard to say they didn't win this E3.

However, I would be remiss if I didn't acknowledge that Nintendo also killed it on the announcement front, with the big reveal that a sequel to Breath of the Wild is coming. Plus we've got No More Heroes III on the way, Daemon X Machina, Astral Chain, and a bunch of other Switch exclusives that completely cement the Switch as one of the best consoles to own.

Then, there were the other games: Borderlands 3, Cyberpunk 2077, Doom Eternal, and the boundless energy that is Ikumi Nakamura that made this a rather memorable E3.