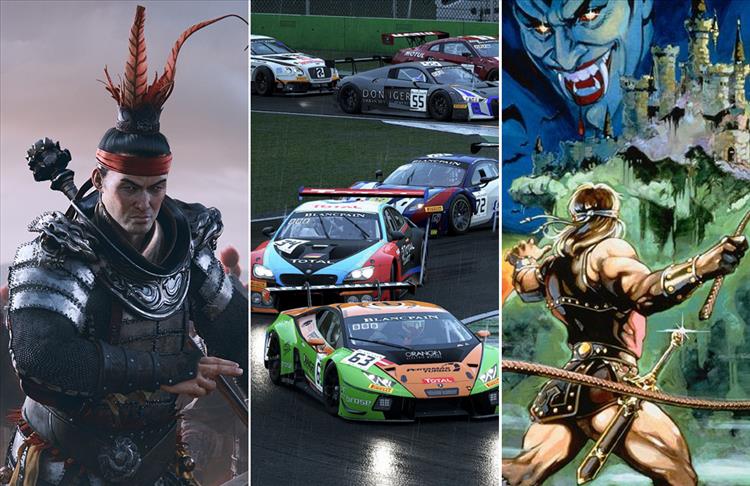 Cartoonishly punishing platformer Cuphead is coming to a Tesla near you. Heavy metal rock band Iron Maiden just gave video game Ion Maiden two million reasons to change its name. And Netflix is going to be at E3 this year talking about turning Netflix shows into video games.

Kinsey Danzis
I’m going to be largely offline for the next two weeks due to travel, unfortunately missing E3, because of course that’s when this trip would be scheduled. So what better way to spend my plane rides than with retro video games? After rewatching Netflix’s Castlevania, I decided to get my hands on the Castlevania Anniversary Collection for Switch, and am going to spend my travel downtime playing the same games that my father used to play when he was younger. I’ll get over the lack of Sypha and Trevor in the games...eventually. If anything it’ll hold me over until we get a new season on Netflix.

Dave Gamble
I started the week continuing my return to Red Dead Redemption 2 with a long trek with my trusty horse, Beull. We finally headed back to the ranch, but the wife was not in the least bit happy to see us. She doesn't have anything against Beull—he's just a horse to her, but did she ever have some harsh words for me! I was informed that I'm not pulling my weight at the ranch that I moved heaven and earth to get, and she's sick and tired of it. We didn't stay long, Beull and I. Now we're way out west hunting for iguanas and coyote. Of course The Law is pretty tough out this way and will go out of their way to be obstinate, short-tempered, quick-to-shoot bullies, but at least you know where you stand with them. If, that is, you can remain standing. They are utterly unaware of this thing called "surrender."

My rough, yet far less stressful, life away from the ranch was interrupted by a request to take a look at Assetto Corsa: Competizione, the successor to the pretty okay Assetto Corsa car racing sim. Assetto is in my library and I use it when I'm looking for a change of pace, but it has never been the highest polished or most beautiful or best driving racing sim that I have, and the UI has always felt pretty rough around the edges to me. Sadly, Competizione is worse. It was released far before it was ready. The VR implementation is terrible, for a start, so I was forced to retreat back to TrackIR for head tracking. That probably would have been good enough, had TrackIR actually been implemented. It has not. Still, I persevered. There were some bright spots. Aesthetically, it's gorgeous. And? Well, there is no "and."  Being pretty is currently its only redeeming quality. While there is a great deal of potential on display, the first impressions being made with the far too premature full release are likely to poison the well for a good long time. I have a review written and ready to go, but I feel terrible about the score I am going to have to give it. At this point, I'm just going to walk away from it and hope it improves. Kinda like the strategy Buell and I are adopting towards Mrs. Marston.

Every now and then I surreptitiously watch YouTube videos while pretending to watch TV with the wife when I'm not bleeding out on a dirt road in Tumbleweed or staring rigidly straight ahead while trying to drive a race car. A couple of nights ago, during the Game of Thrones mega-battle that was so dark that it could only be seen on X-rays, I happened across a video praising the merits of a free mission for the DCS UH-1 Huey helicopter. Now there are plenty of free missions out there, but this was one that I have often thought about trying to build myself. Basically it's a Search & Rescue thing - you make a radio transmission to a dispatcher and he gives you a bearing and distance to someone in need of an airlift to the hospital. The trips are generally only 3-5 miles, so there isn't a lot of long distance droning along. The trick is in finding the patient - you have to get with a quarter of a mile or so before they will pop smoke. That takes some pretty good dead reckoning, I'm here to tell ya.The mission designer seemingly has a mean streak deeper than John Marston's wife—some of the landing zones are brutally tight. I have left my rotor blades laying on the ground more times than I would want to admit. Still, it's very good practice and I have become much more proficient with the Huey. And the VR is phenomenal.

Randy Kalista
I didn't discover it, but I've diagnosed a problematic condition called "mouse hover." I've damaged the median nerve and flexor tendon in my right hand that allows my index finger to prop itself over my mouse's left-click button. Specifically it applies to me thinking about, but not actually clicking, the buy button on sites like Steam, GOG, and the Epic Games Store. Pick your poison. The only remedy—and again, I was self-diagnosing here—was to purchase Total War: THREE KINGDOMS. All caps. I'd been resisting my 2019 New Year's Resolution of "Screw It, I'm Getting It." But Soviet Republic reduced itself in my memory to nothing more than a staycation fever dream, and BATTLETECH (all caps): Urban Warfare was at first just a few Netflix-and-chill nights with an ex-GF.

But Three Kingdoms covers a section of history that public schooling in the United States knows nothing about: All of China, Basically. So, being a product of public education myself, I've got some learning to do. I've cracked open Romance of the Three Kingdoms on my Kindle. I'm just trying to get some perspective on 2nd century China before firing up an entire game about total warfare on it. I'm distinguishing Liu Bei from Liu Bao. Figuring out who's Sun Qian and who's Sun Quan. Hey, I'm not dissing. Hollywood is serving up Chris Pine, Chris Pratt, Chris Evans, and Chris Hemsworth all at the same time and we somehow manage to keep them all separate. So, here's looking forward to a Chinese civil war that's got hundreds (thousands) of years' worth of literature backing it—not to mention a Dynasty Warriors game or two. I've heard they made a few of those.