The September 19th release of the Sega Genesis Mini is still a few months off, but Sega has revealed that the console will be a little bit extra-special. The Genesis Mini will include a total of 42 classic games, including one that was unreleased, and another that might as well have been.

First up is classic scrolling shooter Darius. Taito's sequel, Darius II, graced the Genesis but the original never saw life on the console Taito is going to rectify this with a brand new port of the shooter, exclusive to the Genesis Mini.

The second game is good old Tetris, which technically did see a release on the Genesis. However, the ludicrously complicated legal situation surrounding Tetris in the early 90s--seriously, documentaries have been made about just the legal issues--meant that the Genesis version of Tetris saw an incredibly limited release. This is basically the Genesis equivalent of Stadium Events, but even more rare; at one time it was uncertain if Tetris ever actually released on Genesis. It did, in obscenely limited quantities--there are reportedly only 10 legitimate examples of Sega Genesis Tetris in the hands of private collectors. if you snag the Genesis Mini, you can finally try it for yourself.

Check the press release below for the full list of 42 announced titles on the Sega Genesis Mini. 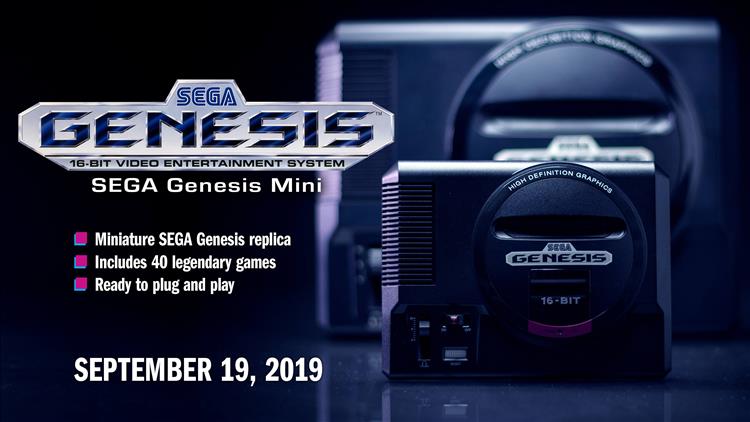 With 40 42 Games, Your World Will Never Be The Same

That includes one of the most popular arcade games released by SEGA. The iconic Tetris® will be dropping on to the SEGA Genesis Mini! Even better, if you plan on attending this year's E3, you'll be among the first in the world to play it. The other will be--

WARNING! A huge shoot 'em up masterpiece Darius is approaching fast. The beloved arcade classic is making its way to a brand-new platform, and you won't need three monitors to enjoy all its legendary, aquatic-themed glory.

Another title leading the pack is one of the most iconic and intense motorcycle-racing experiences in Road Rash II. Grab your trusty chain or bat and compete in brutal street races alone or with a friend in 2-player split-screen action!

Finally, we have the game that made all your non-Genesis owning friends jealous, the one that was a cut above the rest, Strider. Take on mechanical beasts of all shapes and sizes as you flip and climb around futuristic Soviet Russia in a near-perfect arcade port.

But that's certainly not all! Here are the rest of the amazing titles coming to the SEGA Genesis Mini:

SEGA Genesis Mini, By the Numbers:

42 games, handled by M2, one of the foremost developers in porting and emulation of classic video games, for just $79.99.
The best-of-the-best from SEGA and our partners at Konami, Capcom, EA, Disney, Interplay, and The Tetris Company.
For the first time on any miniature console, players will be able to enjoy games like Darius, Earthworm Jim, Alisia Dragoon, Monster World IV, Contra: Hard Corps, Castlevania: Bloodlines, Mega Man®: The Wily Wars, and many more!
55% the size of original Model 1, accurate replica.

Q. Which games will be included?
A. The full list of 42 titles included with the system are:

Q. How big is it in comparison to the original console?
A. It's approximately 55% of the original Model 1 size.

Q. What do you get in the box?
A. The Genesis Mini comes complete with 42 games, Two replica three-button USB Genesis controllers, One USB to Micro-B power cable, One power adapter (North America only), and One HDMI cable.

Q. Who handled the ports?
A. M2 is handling the porting process. They've previously worked on SEGA AGES and SEGA 3D Classics Collection, with a fantastic reputation based on the quality of their emulation projects and their faithfully recreated ports.

Q. Can I use original Genesis controllers with the Mini?
A. No, only the provided USB controllers or the Retro-Bit® SEGA Genesis 6-button controller.

Q. Where can I find more information?
A. genesismini.sega.com

About SEGA® of America, Inc.:
SEGA® of America, Inc. is the American arm of Tokyo, Japan-based SEGA Games Co., Ltd., a worldwide leader in interactive entertainment both inside and outside the home. The company develops, publishes and distributes interactive entertainment software products for a variety of hardware platforms including PC, wireless devices, and those manufactured by Nintendo, Microsoft and Sony Computer Entertainment Inc. SEGA of America's website is located at www.sega.com.