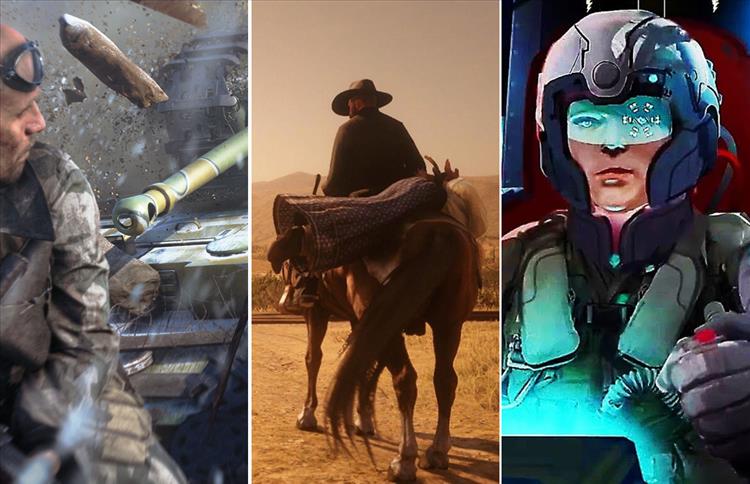 To safeguard "the education of children and youth," some states in India have arrested people playing PUBG. The New York Times asks whether video games are the best new social network. And while the American Psychiatric Association says there is not sufficient evidence, the World Health Organization added "Gaming Disorder" to its global medical guide.

Dave Gamble
I finally retrieved my wayward Red Dead Redemption 2 disc on our Memorial Day weekend camping excursion. I wasn't able (read: "allowed") to play it at the time, but I was blessed with a scintilla of spousal dispensation to take a little time to give a demo to a young woman that was showing an interest in it. Using my throwaway account, I let her ride around on the horse for awhile, but I eventually took over the reins to demonstrate some more complex aspects of the world, such as hunting and the market economy that allows me to sell my prey to a local butcher. We were soon loaded up with some pelts, turkeys, and fish. Before we could get as far as the market in St. Denis, I lightly bumped a pedestrian. That somehow blossomed into a $5 bounty for Disturbing the Peace, and RDR being RDR, we soon found ourselves as the focal point of a band of overbearing police officers. Discretion being the better part of valor, and a fervent desire not to engage in a gunfight with the law in front of a possibly impressionable teenager, I raised my hands in surrender. That should have done the trick, but when I dismounted the horse, I ended up with my back to the cops. I turned around, but that put me in an "I'm gettin' ready to draw" posture, to which the gentlemen peace officers of St. Denis responded as, well.... pretty much in the way RDR cops respond. It was a massacre of one, with the "one" being me.

The spectator drew a breath, then said, "Well, that escalated quickly."

All I could say in response was, "Well, that's Red Dead for you."

One home, I logged into my "real" RDR2 account and emerged from what felt like a two month coma. It was dark and rainy, and near as i could figure I was on the outskirts of Valentine, I confirmed this by buying into the local poker game. If its a $2.50 buy-in, it must be Valentine. I soon parlayed my $2.50 into $10.42, but lost it all on a Jack high straight when I went all in against what turned out to be a King high straight. It was morning by then, so I wandered down to the stable to get Beull saddled up. One problem, though - I had forgotten many of the more arcane key mappings during my long absence, the upshot of which was my attempt to pat good ol' Beull on the nose resulted in me hauling off and nailing him right on the snout with a pretty believable simulacrum of a full roundhouse punch. Beull being only at level 2 in our personal relationship, took it in completely the wrong way. No benefit of the doubt whatsoever.

I'm giving him a day or two to cool off. Chances are that I'll end up killing him again soon anyway.

Randy Kalista
I'm back aboard the Argo. She's in a low-earth orbit around some jungle planet near the Periphery. The Argo still looks like a wine barrel glued to a centrifugal exhaust fan, but she's my wine barrel glued to a centrifugal exhaust fan. Been spruced up around here since the BATTLETECH: Flashpoint DLC, too. At some point in the last six months Harebrained Schemes brightened up the Argo's gloomy interior. Some of the details are more blunt, like they weren't ready for the limelight, but it's still nicer than operating in bat-cave darkness. Can't talk about the Urban Warfare DLC until next week. But I'm expecting to dress up for the city, grab my cane, doff my top hat, and proverbially paint the town red.

And this BATTLETECH DLC couldn't have arrived at a better time. I'd only owned Workers & Resources: Soviet Republic for two weeks, but it'd felt like twice that. I did so many Google searches on communist urban planning and the Cold War that I'm on at least on two CIA watch lists now. But YouTube still shows me half my ads in Spanish for some reason, so, who knows. Algorithms, right?

Nicholas Leon
Well, I just started my second ever full-time job, so it’s been nothing but work, driving, and finding new ways to slip tiny amounts of things I actually want to do in my schedule for the last few weeks. But something I’ve been having a lot of fun with are the new modes Battlefield V has been churning out. First it was Conquest: Grind, a miniature form of Conquest that smashes two teams against each other in a sliver of one of the game’s giant maps. Now, though, it’s Tank Battles, a game mode in which heavy armor respawns twice as fast, and wow is it fun.

While not entirely asymmetrical, the mode proves challenging for those players on foot compared to those in tanks. But when three engineers can take out one Tiger while capping a base, and then dodge their way through bombs and bullets to reinforce their teammates at a different one, the chaos is downright musical.