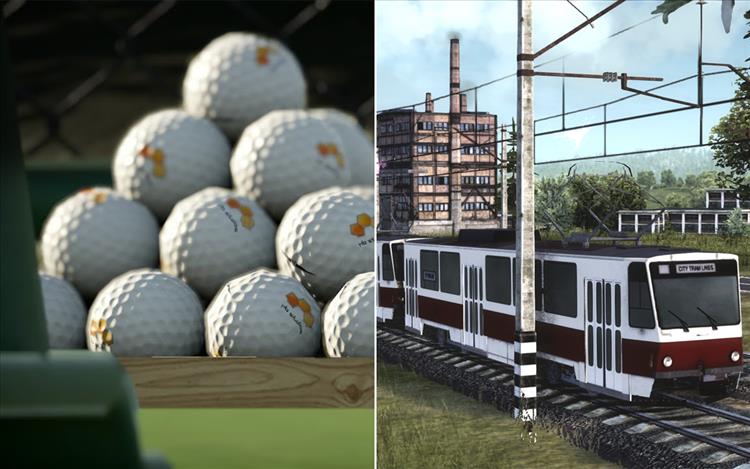 Most of us don't have delusions of making $15,000 a month as a professional gamer. So why might making $50,000 per hour as a live streamer sound like something one could work up to? And just as Sony Interactive launches a film and TV studio to adapt video game projects, rumor is that Game of Thrones author, George R.R. Martin, has consulted with FromSoftware on a dark Norse mythology video game called Great Rune.

Dave Gamble
It's a long weekend coming up and we will be relocating to the sand dunes of the east banks of Lake Michigan, which means I'm going to be limited to the PS4. This trip is different, though, in that we will be meeting some friends at the campground. Having discovered that two controllers will allow two players to compete side-by-side in The Golf Club 2, a couple of critically important tasks have been the focus of my pre-departure preparations. While the wife makes sure we have sufficient foodstuffs, medicines, convenience items, and pet support stuff, I am concentrating on far more important things like getting a second controller for the PS4 and spending hours practicing on steep fairways and fast greens. Having beaten this guy every single time in dozens and dozens of head-to-head sessions on iRacing, I don't intend to start losing to him now! Especially with spouses as witnesses - I would never hear the end of it.

Randy Kalista
So there I was, owning the horrifyingly named Workers & Resources: Soviet Republic for only one week. Then I noticed something. My Steam counter was approaching the 60-hour mark with this brand new game. Wait a tick. Sixty hours. Divide by seven. Did I really just put in nonstop 8.5-hour days with Soviet Republic? It's been a self-imposed video game gulag around here. Good thing the wife and kiddo have been out of town. My work-life balance is currently out of balance. But these are the sacrifices we make for the motherland.

Meanwhile, in Russia, I was watching coal ore conveyor belts sidle down a mountain somewhere in the Ukrainian countryside. That plucky Tetris-like tune pops up on the soundtrack when my construction office catches fire. The third-world immigrants I'd imported into a nearby prefab block tower of project housing were now watching my 1974 East German ladder truck slam into the side of the structure fire. It's early access days. Plenty of bugs. Crashes to desktop every few hours.

Fire's out, though. Now I'm noticing the new school bus I put into action is picking up children and trying to drop them off at the Comrade Drinks Bar. I must've clicked the nondescript Cold War pub roof when I should've clicked the nondescript Cold War kindergarten roof when I'd set up that route. I should maybe fix that. I plant a couple more poplar trees behind the copper statue of Lenin. Just trying to brighten up my haze-gray communist urban planning that somehow saddled this small town with three coal power plants crisscrossed with towering megawatt power lines. Soviet Republic is Cities: Skylines times Transport Tycoon times Rise of Industry. On crack. Minus any meaningful tutorial on how to use crack.

But that's it for me. Only playing one game right now. Probably too much. Dasvidaniya, comrades.