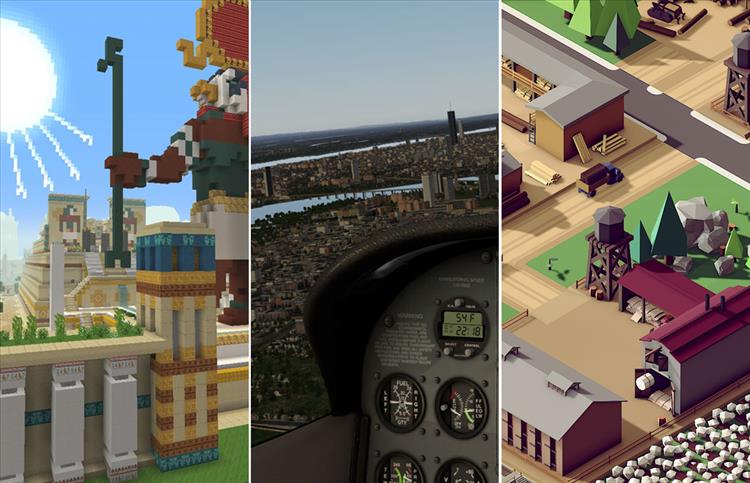 Microsoft Solitaire, the game that taught decades of new computer users how to drag and drop, is inducted into the World Video Game Hall of Fame; Super Mario Kart, Colossal Cave Adventure, and Mortal Kombat complete the 2019 class. The Detective Pikachu movie looks like it's breaking the video game curse. And F. Gary Gray, the film director of Straight Outta Compton and the upcoming Men In Black: International, is looking to direct a Saints Row movie.

Kinsey Danzis
I’ve still got that sweet, sweet carpal tunnel syndrome keeping me from playing most games, so I’m still chilling with some sedentary, calm games of Minecraft for Switch. The Joy-Cons are much easier to handle with a bad wrist than an Xbox One controller or a mouse. Honestly, I’m just happy I can play anything at all. In the near future, though, I’m going to have a very odd spread of video games on my schedule. Remember that one time I was helping teach a class about the interplay between history and video games? Well, apparently the History department chair at my alma mater and I, plus one other guy we taught the class with, are going to be writing a textbook on the subject. Who says video games don’t mesh well with academia?

Dave Gamble
My trip out to an active USAF base to fly the B-2 simulator convinced me to move forward with joining the Civil Air Patrol, primarily to do something with purpose and of value with the pilots license and ratings I spent so much time, effort, and money on. The secondary purpose/benefit is that CAP members can use their very nice airplanes in pursuit of higher ratings, which I see as a lower-cost way of earning an Instructor's certificate. It's all good, however... the avionics in their planes are Garmin G1000 panels, a technology that I have never used. I looked at a G1000 training program, but the $100 price tag dissuaded me. Rapidly.

This brings us to X-Plane 11, a title I already have in my Steam library. I dimly remembered one of my sims having a pretty good G1000 copy, and I turned out to be right! It was X-plane. I've spent 8 - 10 hours "flying" a Cessna 172 with the faux G1000 and have become comfortable with it. It will be quite awhile before I'm fully up to speed on it, but I am certain that when I fly one of the actual planes next week, I will have no trouble operating the Garmin. The plane itself will feel like a truck with flat tires compared to my little two-seater, but I just will have to come to grips with that too.

Formula 1 is in Spain this week and I need to reacquaint myself with the Catalunya track before I watch it, so I'm going to have to find a suitable mod track for rFactor2. If I can't, I can always go back to Project Cars 2. PC2 is substantially better than nothing, but I always miss the supple yet pervasive force feedback of rFactor when forced to go elsewhere. It's like a brain surgeon suddenly losing the sense of touch - I can still do it, but not as well and not as enjoyably.

Randy Kalista
A husband that only loves me when I'm pregnant. An incompetent councilor threatening civil war. Rival armies on my doorstep to the the north and south. And everybody mad that I'll be continuing this dragon matriarchy by putting my first-born female egg on the throne. My teenage dragon queen has had quite a year already. Uniting this scaly race in the Crusader Kings II Animal Kingdoms easter egg was never going to be easy. But if my racially self-hating tribes don't stop acting like crabs in a bucket, we'll never claw our way out of here.

I'm just now noticing that Rise of Industry has the same acronym as return on investment. ROI is a concept I'm barely getting. Well, I get the concept. I'm just missing a button push or two to make it happen in practice. Rise of Industry is a logistical nightmare as a gameplay mechanic. Like that old Chris Sawyer game, Transport Tycoon. You don't build a city, you build industries supporting the needs of a city. You don't walk into the urban planning office with a bag full of tax revenue, you build supply lines heading for the farmers markets and hardware stores. Setting up truck routes could be a little more intuitive. But I've ensured that the nearby town of Troutdale will never suffer a shortage of wheat and potatoes.