On May 28th, players of EVE Online will face a new threat in the form of the mysterious Triglavian race in the next expansion titled "Invasion". Capsuleers will have to meet the threat head on in the free expansion as they face new enemy ships and escalating consequences while earning rewards for doing so. "Invasion" will introduce three new Triglavian ships in the Tech II category at the Frigate, Destroyer, and Cruiser classes, as well as additions to the Mutaplasmid system that players can loot from Abyssal Deadspace to modify their existing ship modules and make them more powerful and efficient, though players risk irreversible attribute reduction in doing so. 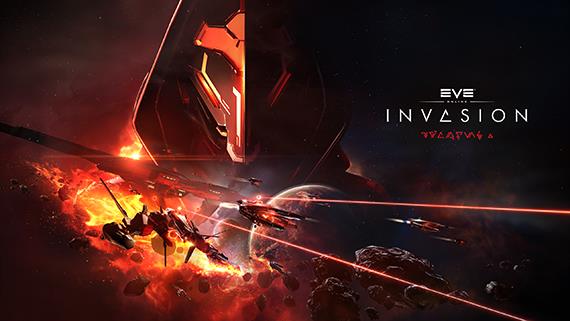 4 May, 2019 - Reykjavík, Iceland – Today, CCP Games announced 'Invasion', the newest expansion to EVE Online, the biggest single shard free-to-play spaceship MMO game of all time. Arriving 28 May, EVE Online: Invasion brings a thrilling adversary to the known space of New Eden for the first time, thrusting the mysterious Triglavian race to the forefront of the game. Capsuleers will be challenged to meet the threat head on, facing new enemy ships, escalating consequences and earning lucrative rewards. EVE Online: Invasion will be free to download for all players.

“EVE has always been about actions having lasting and meaningful consequences, so with EVE Online: Invasion our goal has been to provide a universe-changing event for our community to experience in familiar space” said Bergur Finnbogason, EVE Online’s Creative Director. “Capsuleers will be defending their territory from a fearsome new sect. We’re incredibly keen to see our players fighting for the star systems they hold dear against an increasingly serious threat unlike anything they've ever faced before!”

The Invasion expansion will provide a new presence and dimension to gameplay in New Eden that will bring players back time and again, inspiring them to be a part of history unfolding, the effects of which promise to change the EVE universe forever.

“EVE Online has always had the goal of providing new experiences and a living universe like no other,” said Hilmar Veigar Pétursson, CCP’s Chief Executive Officer. “With EVE celebrating 16 years of strength and innovation, we continue to build on that ambition and tradition. I truly believe that by challenging our Capsuleers to defend the universe they have shaped, their destiny - as ever - remains in their own hands, ensuring EVE's appeal now and into the future.”

Progressing the Triglavian story in EVE Online onward throughout 2019, the Invasion expansion introduces three new and formidable Triglavian ships in the Tech II category at Frigate, Destroyer and Cruiser class. There will also be additions to the Mutaplasmid system that players can loot from Abyssal Deadspace. This will allow players to modify their existing ship modules to make them more powerful or efficient, but as before, they risk irreversible attribute reduction too!

For more information about EVE Online: Invasion, including the new Triglavian offensive and Tech II ships, new Mutaplasmids and other enhancements, visit http://updates.eveonline.com. EVE Online can be downloaded for free by visiting www.eveonline.com/download.

About EVE Online®
EVE Online (PC/Mac) is a compelling, community-driven spaceship MMO game where players can build and pilot a wide variety of starships, traversing vast solar systems for free and choosing their own path from countless options, experiencing space exploration, immense PvP and PvE battles, mining, industry and a sophisticated player economy in an ever-expanding sandbox. EVE is a captivating game in which hundreds of thousands of players compete for riches, power, glory and adventure, forging their own destinies in a single thriving universe. For more information, visit www.eveonline.com.

About CCP
CCP is a leading independent game developer that has been praised for its artistry, game design and unique player-driven, infinitely scalable storytelling narratives. CCP is the creator of the critically acclaimed space MMO EVE Online (PC/Mac), EVE: Valkyrie, a competitive multiplayer first-person spaceship shooter for PCs and PlayStation®4, Sparc™,an original virtual sport for PCs and PlayStation®VR where players' VR hardware serves as their sports equipment, and the Gunjack ™ series, VR arcade-action games for PCs, PlayStation®VR, Google Daydream, and the Samsung Gear VR mobile platform. Founded in Reykjavik, Iceland in 1997, with additional offices in London and Shanghai, CCP is an independent subsidiary of Pearl Abyss, the creators of Black Desert Online. For more information, visit www.ccpgames.com.