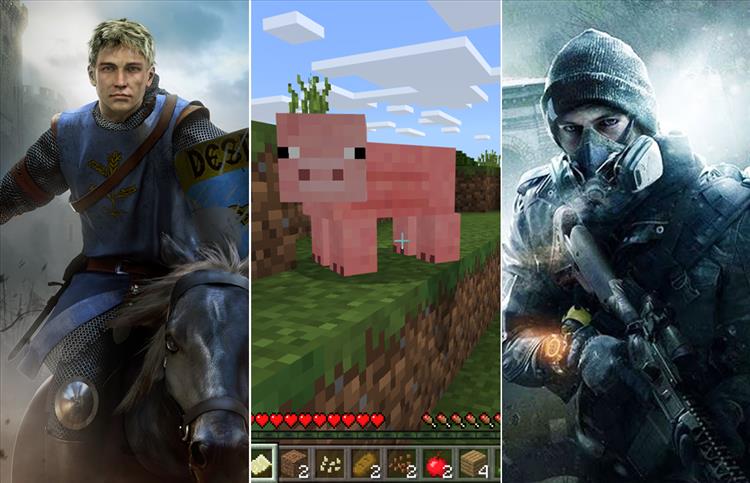 The Hollywood Reporter decides it's time to have a discussion about zombies and the post-apocalypse in video games. Before setting off the battle royale genre as it's known today, PUBG creator Brendan Greene was living on welfare in his parents' home. And Kotaku discusses "that video game scene" in Avengers: Endgame [spoilers ahead].

Tom Bitterman
A couple of days ago, I spent 45 minutes playing with the most amazingly realistic flight simulator I have ever seen. Not many people play with this particular sim; the people that usually use it are dead serious about it. That would be because they are active duty USAF pilots learning how to fly the B-2 stealth bomber. One of them s my friend, and he just graduated from initial training—part of the graduation ceremony is the chance to bring friends and family the base for a tour, part of which is some seat time in the full-motion B-2 simulator. If you imagine it as the front end of a real bomber stuffed into a pod and situated atop huge hydraulic jacks, you've got it right.

The B-2 is a fly-by-wire airplane, which means that there are no physical connections between the pilot's controls and the control surfaces of the airplane. Any stick forces felt by the pilot are artificial - they are generated by the airplane's computers. That means that what I was feeling and seeing in the sim is as identical to the real thing as millions of dollars can make it. It is, therefore, a point of pride that I now have the perhaps dubious honor of being the only civilian to loop a B-2 bomber, if not the first of any type. Two reasons for that: 1) it is not really possible to do in the actual airplane without potentially over stressing the airplane, and 2) pilots training for the mission of delivering nuclear bombs to a target do not want to risk appearing to be frivolous. The first didn't matter because I am unlikely to ever fly a real B-2 bomber, and the second didn't matter because I was just a tourist.

That came at the end, though. During the first 43 minutes, I struggled mightily to prove myself capable of one of the most difficult aerial feats ever, an air-to-air refueling. I did better than any of them expected, but I really only proved that I could 1) lose control of the plane and crash us into the big Boeing KC-135, killing all involved, 2) ham-fist my way around on two less lethal but no more effective attempts, and 3) finally get connected on the fourth and fifth tries, only to fail to get the plane slowed down enough to stay in position. I was attached to the boom for a cumulative 4 seconds. Still, how many civilians right off the street have done that? I can't help wondering if I would have done better if I had been able to practice in DCS World.

Kinsey Danzis
Well, I was hit with a weird urge to play Minecraft on Switch, and I was going to do just that and have myself a little throwback night, but then I went and gave myself carpal tunnel syndrome by working on my Hylian Shield, so I’m not going to be gaming for a little while. I’m using this time to think longingly of all the gaming I’m going to do once it heals: Minecraft, Human Fall Flat, more Horizon Zero Dawn, and maybe a little Ocarina of Time thrown in there for spice. In the meantime, I’m just puttering around the apartment. Don’t tell my doctor I’m using a hammer.

Charles Husemann
This might be the weekend that I finally finish the main campaign of The Division 2. According to the stats screen I've only got about 27% of the campaign left. One last push will allow me to wrap things up. It's becoming a bit of a slog. Hopefully I can power through with the help of my trusty LMG and sniper rifle.

Randy Kalista
Days Gone is shifting into gaming comfort food for me. The zombie stabbing is on par with The Last of Us. Rolling around Oregon on my Hog is as good as any Assassin's Creed rooftop parkour. Deacon St. John isn't the worst anti-hero to hit the post-apocalypse, and Sam Witwer's performance makes him one of the best voice acted. Nolan North who? So, with a free survival mode coming in June, I'm getting cozy with the map and trying to memorize my way around, since survival mode will take away the HUD, most notably the minimap.

I'm firing up BattleTech for the first time since maybe Christmas. Yes, I finally bought XCOM 2: War of the Chosen. Yes, I finally bought Mutant Year Zero. Yes, I wrapped up Banner Saga 3. And no, I think BattleTech is still the best turn-based strategy game of the past year or so. That little old Unity engine is chugging along, struggling to keep up. But after decades of MechWarrior, last year's BattleTech is the closest encapsulation of the tabletop role-playing mech war game I've ever played. Heck, it's a hundred times better than me and my middle school buddies pulling the technical readouts off the shelf back in the day. Erasing and penciling in—and re-erasing—all those little damage circles on our mech's character sheets? Not the best part of the '90s, as far as I remember.

Also, as it turns out, I’m finally learning to play Crusader Kings II after seven years of false starts with that game. All it took was the Animal Kingdom easter egg to get me to do it. All Hail the Teenage Dragon Queen.