Breaking into the world's largest gaming market (e.g. China) now requires by law that you pull blood, corpses, Mahjong, and Poker out of your video game. Nintendo's original Game Boy turned 30—no, you're old. And a programmer at Insomniac revealed that Jewish characters in Marvel's Spider-Man don't work on the Sabbath. 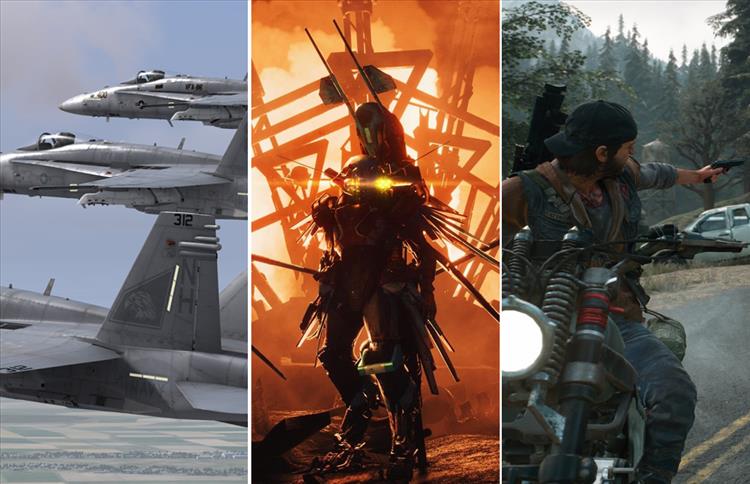 Dave Gamble
I'm heading back out west for the weekend. It will be a nine-hour drive, but with the offer of an opportunity for some seat time in a real live military-grade flight simulator it was an easy go/no-go decision. It has been mentioned that I might be able to choose my own flight scenario; I imagine most people would select takeoffs and landings, but those hold no appeal to me if an alternative is to do an air-to-air refueling. I have always been fascinated by the process, and this is likely to be the closest I will ever get to it. In preparation, I decided to fire up the DCS F-18C and have spent many hours practicing a few, even if the Navy technology is a little different than the Air Force refueling tankers.

Historically, I've never been able to even get attached to the tanker—it's very delicate work and depth perception is important. I thought maybe VR would help with the depth perception, and it did. It would be perfect practice if it wasn't for one nagging detail: when wearing a Rift, it is very difficult to use the keyboard keys needed to get the tanker to setup for your refueling and they can't be mapped to the HOTAS. That's not a showstopper, though; more just a frustration. In air-to-air refueling, 99% of the effort is simply flying very tight formation with the tanker, to exacting standards, for a relatively long time. In DCS I'm able to do that with or without attaching to the tanker. I also think there is a mod that allows mapping the keys to the HOTAS, but I like to keep a "clean" DCS. Time will tell if all of the preparation makes a difference, but I think it will. The fact that I can use affordable, consumer-level software to get an experience very close to a simulator (which will feel exactly like the real plane) still amazes me.

I'm also playing Sniper Elite 2. It's nostalgic in its gameplay, but improvements to the graphics make it feel like you just got new prescription readers for the first time in a decade. This will likely trigger (heh!) a revisit to Sniper Elite 4 in the near future.

Charles Husemann
Last weekend I hit a bit of a wall with The Division 2, so this week I'm going to take a bit of a break to get a bit of perspective on the game. Right now I'm thinking I might fire Anthem back up to see what that game has been up to in the last month. Most of the big changes are still in the works, but I know the BioWare team has pushed out a few patches to improve quality of life. I might also see what new titles have hit Xbox Game Pass recently to see if there is anything worth playing there.

Randy Kalista
The first thing you should know about Rebel Inc. is that it's from the creator of Plague Inc. The second thing you should know is that batting down the hatches on a rebel insurgency is much more stressful than just watching Madagascar quarantine itself against your virus-spreading master plan.

Things started off peacefully enough in my fictional Middle Eastern region in Rebel Inc. The previous regime had just been overthrown and Operation "Free Cake" (thank you, random name generator) spent its first precious, peaceful moments by working with locals to understand their education, healthcare, water, and sanitation requirements. I further invested in anti-corruption measures, because opportunities for corruption are everywhere. And things just exploded from there. Even on casual difficulty. Rebels attacked highly populated urban centers. I worked toward minimizing international peacekeeping forces that tend to antagonize the local populace, and replace them with local policing actions, since police have homes and families here. I utilized drones but couldn't bring myself to authorize air strikes; the potential for civilian casualties was too high. I built up road and highway infrastructure to move my military forces as quickly as possible into military flashpoints. Rebels wrecked our first democratic elections. I managed to get women into social and political places of influence. Ultimately I brought complete stability into the region, but with only 33% support from my own government.

Rebel Inc. is nowhere near as scary as 2007's Peacemaker, which focuses on the Israeli-Palestinian conflict. Shudder. I played that game once, 12 years ago, and I've never been able to forget about it, and I've never been able to play it again. Great, now I'm seeing Peacemaker is free (and ad-free) in Google Play. So, I guess that's downloaded now, too.

By the time this posts, my full review of Days Gone will have been up. I'm getting both hands wrapped around this Sons of Anarchy-meets-The Last of Us open world zombie drama.

Carter Kilmann
It was as if we’d woken up from a night of partying in the desert—we were dazed, confused, and utterly lost. On top of that, we were practically nude. No shelter or signs of humanity in sight. So we did what anyone would do: pranced around, picked cotton, and waved our fists at anything and everything.

Although to be fair, I didn’t realize that’s what I was getting into when I started up 7 Days to Die for the first time. My first go at the game included a lot of trial and error—heavy emphasis on error. It took a couple deaths just to realize that punching was the solution to 90% of our problems. With enough determination, your bare fists can take out a shrub, a tree, a boulder, hell even a car or wall. Pretty much anything...except a zombie.

In an advanced, modern world within 7 Days to Die, there are guns and vehicles in the game to enhance your chances of survival. But we lived as Neanderthals. Our eureka invention was the wooden bow and arrow. Don’t even get me started on stone axes.

I spent more time trying to repair broken legs than anything else. We couldn’t get ahead. It was one step forward and two steps back off a mountain side into a creek. The terrain is unforgiving.

My spirit was shot when all I could muster was a weak limp, while suffering from hypothermia, starvation, and dehydration. I was pretty much a zombie already.

Suggested new title for the game: 7 Days to Die a Lot.