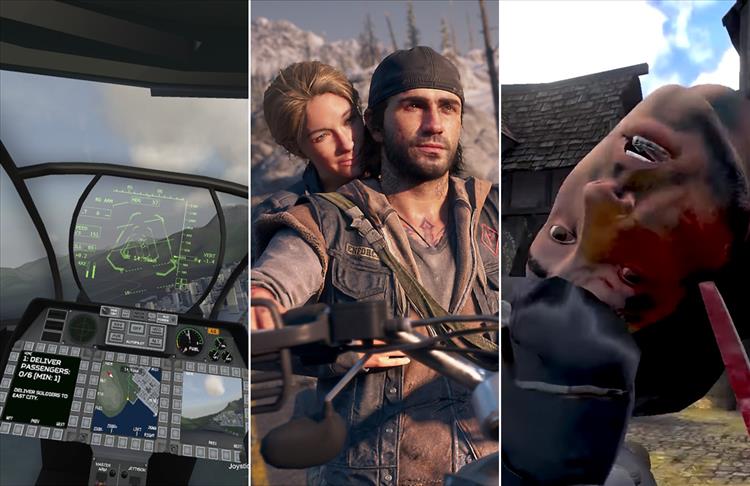 Due to Ubisoft's years of meticulous study and in-game reconstruction, the rebuilding of Notre Dame Cathedral could find help in Assassin's Creed Unity. Weedcraft Inc., a game featuring no illegal drug use or violence, is banned from Facebook while YouTube videos are being demonitized—"But you can post ads for whatever shooty shooterman murder simulator w/ no problem." And Twitch has gotten into video game development with the launch of a karaoke title called Twitch Sings.

Dave Gamble
I'm striking gold with my mining through some of the VR-based Early Access titles that I picked up in the initial assault on my Visa card triggered by the acquisition of an Oculus Rift. There were half a dozen that I really liked, but some of them were eventually put out to pasture to make room on the disk for my latest obsession, and some I have kept up with either by playing them now and again or by reading up on their development progress in the Steam News sections. Of the bunch, my favorite has to be Derail Valley, an incredibly promising VR railroad simulator. It's been a rocky trail, with a few of the most egregious game breakers sticking around like Uncle Eddie, well past the limits even an eager player/fan can tolerate. For well over a year, I could not complete a single hauling job for one reason or another, mostly having to do with derailing the train. Finally, with the most recent build I was able to complete a trip with three oil tankers attached to my engine. Alas, I didn't get paid for the haul; I had attached the wrong set of tanker cars at the departure depot. Still, it's becoming a very clean and reliable game and will get played far more often. In real life, the controls on utilitarian workhorses like railroad shunting engines are big and robust—they model perfectly with VR without having to be over-sized, thus reducing immersion and suspension of disbelief (thank you, Theater 101).

Airplanes are pretty much the opposite: tiny knobs, buttons, etc. Despite that, I also reinstalled VTOL VR, which is a military flight sim designed from the ground up (so to speak) for the VR platform. If you were to look at YouTube videos, you would likely be put off by the relatively low budget graphics, but to do so would be to not understand contemporaneous VR technology. Simply put, the graphics resolution remind me of 1998. In response, VTOL VR has been designed to be legible in VR, if not pretty. As much as I love the VR in DCS World, it is very frustrating to not be able to read the labels on the cockpit switches or see targets on the ground. VTOL VR provides the pilot with big switches, big knobs, big handles, and big fonts. It's not pretty, but it's flyable. The VR graphics make the sim look like a simplistic toy, but it actually has a lot of technical depth. Much has changed since I last played it, primarily with the addition of a carrier-based fighter and tons of new weapons. It will take a few hours to get back to being able to fly the VTOL plane as I remember it being almost as tricky as the DCS Harrier. After that, it's weapons loose! Although...I also remember getting shot down a lot.

Randy Kalista
Nothing like a dry spell in the middle of spring. Good for playing catch up. Although, how does one catch up to an endless MMO like EVE Online? It's 15 years old. It's had entire books written about thousand-deep player corporations that don't exist anymore. It has a cosplayer that shows up to every EVE convention dressed as a space pope. It has a real-world economist on payroll. The next two years will see EVE stepping up its presence in China, the biggest gaming market in the world. The game is something I'm happy to engage in casually, if that's possible. I log in. I re-up my skill training queue. I pull out of port with my mining frigate and, for half an hour or so, point my lasers at a couple of the juiciest rocks I can find. Then what I actually catch up on is some reading, writing, and watching TV. I watch an episode of Santa Clarita Diet, laughing out loud at that guy from Justified and that lady from 50 First Dates. I read a chapter of Dune and wonder how Frank Herbert got away with naming even a sci-fi character "Duncan Idaho." Then I stare at a blank page in my Google Docs and wonder if I really (do I really?) have a novel rattling around inside me somewhere. So, no, EVE Online isn't really a game I catch up to. It's a game that lets me catch up on other things.

Oh, also, due to embargo restrictions, I'm allowed to do nothing more than acknowledge that, yes, I have a copy of Days Gone for review.

John Yan
So  finally cleared out the space in my basement to get back into room scale VR. Blood and Sorcery is back on the menu after trying it out for a bit in my living room. I was too afraid of breaking things in there so I hadn't tried to play anymore, but I'm anxious to get back in it especially with my wireless VR setup. I'm also going to play some more Anthem, but I'm starting to run into the things that people were having issues with, so that's turning me off of the game. I figure I'd give it some more to finish up my Nvidia DLSS article, though, and then wait a few months to see if it gets any better.