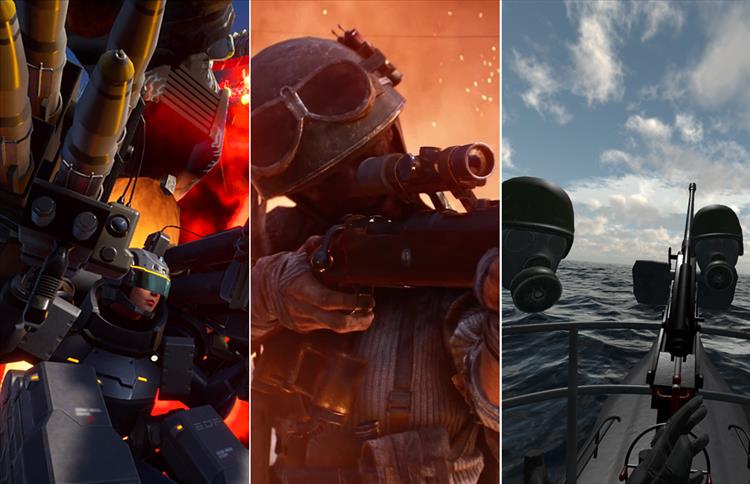 That old "BioWare magic" has gotten the venerated studio through some very tight spots through the years—until it didn't with Anthem. You'll now have to grow a personal library of over 20,000 video games if you want to take away the Guiness World Record from Antonio Monteiro. And the /r/games subreddit shut down on April 1 in order to call out problems of transphobia, homophobia, islamophobia, racism, misogyny, and pro-pedophilia/pro-rape issues pervading Reddit communities.

Russell Archey
I kind of have a big bug problem, emphasis on the word big. I'll be wrapping up my review of Earth Defense Force: Iron Rain this weekend, which is actually the first EDF game I've played since I reviewed Insect Armageddon back in 2011....Holy cow, I've been at Gaming Nexus for over eight years now. Outside of mass insecticide I've been finally playing through Luigi's Mansion. No, not Dark Moon, the original. No, not the remake on the 3DS, the Game Cube version. Yeah, how I've gone this long without playing Luigi's Mansion is beyond me.

Kinsey Danzis
I’m spending a couple weeks house sitting for a very nice couple and their four pets, so I dusted off the old 3DS and decided to finally play a couple classics, buying Ocarina of Time and Majora’s Mask for the duration of my stay. Of course, not knowing which one was the sequel, I went for Majora’s Mask first, and only realized my mistake until I was too far in to quit and start Ocarina of Time instead. Whatever. I’m enjoying my foray into remastered-Legend-of-Zelda land, even though my spare time (again, four pets) is a bit limited.

Dave Gamble
I'm embarking, so to speak, on a rediscovery tour of some of the more intriguing Early Access titles I bought, played for awhile, and set aside to await future development. The one that seems to have made the most progress has got to be Iron Wolf VR, which was already very good a year ago and has grown far beyond my expectations. The last time I looked, they had added an engine room and a player spot to go with it, taking the total available crew to five players, but there reportedly wasn't much for the engine guy to do. That has all changed now and the engine room is quite sophisticated. Power levels can be set higher or lower for various subsystems, for example, and the managing of the engine itself is now far more complex than a single power lever. Weapons have all been expanded an improved, threat levels from airplanes and enemy ships have been better balanced, and the beta branch is now sporting a huge shared open world rather than the limited space formerly provided. I'm very much looking forward to being sunk by a depth charge in the near future.

Derail Valley, a VR-based railroad simulator, has also made great strides. But despite a quick update schedule, they have stopped one step shy of where they need to be for me to get deeply interested again. At a shallow level, they have fixed all kinds of things, but the most pertinent updates show that they have backed off a degree or two on the whole idea a derailments. For quite awhile it was nearly impossible to play due to constant derailments, and those derailments almost always stranded you out in the middle of nowhere, unable to recover your train or get a ride back to a station. That's fixed now, and I did manage to actually finish a hauling job using the diesel shunter, although having marshaled the wrong set of oil tankers onto my locomotive rendered the entire trip moot. We got there, but I didn't get paid. Pulling with the shunting loco is hard work due to its relative weakness compared to the steam engine, but I will not use the steam engine until they fix the coal shoveling problem. It is next to impossible to shovel in VR, it burns what little coal you can get into it far too quickly, and it is entirely unrealistic to make the engineer do it himself anyway—that's why they had a crew of at least two men running those monsters. Hopefully they will see the light and fix that soon. It truly is a remarkable sim and I want to be able to use it.

Charles Husemann
I'm still knee deep in The Division 2. This week I've been responding to calls to backup as I finally figured out how to do so. Why this isn't a surface level UX item is beyond me, but I'm having fun dropping in on randos and helping them with a mission or two and then heading out. I'm like Mary Poppins but with an LMG and a satchel full of grenades. I do like that the game seems to ensure that I'm not being dropped into story missions I haven't played yet and I'm always with a group of people at my level.

Randy Kalista
The moon is bright but the sun hardly rises in Sweden. Even at high noon I pull out my flashlight to loot a woodshed of its JanSport. I guess that's life when you're so close to the Arctic Circle. Even as it's taken time to get used to the short-day/long-night cycle, it's taken time to acclimate to Generation Zero as a whole. I've had to adjust expectations. This isn't Call of Duty in the land of Swedish meatballs, it's Boston Dynamics in an IKEA-effect hunting sim. No time to explain. It could very well require an entire review to unpack that statement.

EVE Online's gravity well is tugging on me. Only because I need a game to play in the background while catching up on reading, writing, and Netflix. It's been awhile since my last genuine foray into this spaceship MMO of meticulous spreadsheets and unscrupulous politics. I'm doing what little research I can to even determine if this in-game invite to Pandemic Legion is legit or suspect. It could just be an invitation out into lawless "nullsec" space so that I'll become an appetizer on some PvP'ers killboard.

Carter Kilmann
Long nights at the office these last couple weeks, would much rather be mercenary-ing around Greece. When I’ve been able to escape, I’ve gotten some quick Assassin’s Creed Odyssey quests in. A dead cultist here, a plundered pirate ship there. You know, the usual. Alas, my cubicle pales in comparison to Odyssey’s expansive landscape and unending horizons. Sigh...back to work.

Nicholas Leon
I’m trying to get into Firestorm on Battlefield V. Because I’m partial to the Battlefield style of first-person shooters, I enjoy it a little more than most other games in the genre. But there’s still that searing disappointment when I make it to the final groups, only to be shot in the back or outgunned by another desperate player. I suppose that’s the way of a lot of these games, hiding out until you can get the drop on someone, which I am not ashamed to say I’ve done multiple times. Here’s hoping that, if I’m playing on a great squad, our hideout doesn’t get destroyed by someone driving a tank straight through it.