My quick impressions of the Mortal Kombat 11 beta

*Disclosure notice. The MK11 beta code was provided to me by NetherRealm Studios*

The Mortal Kombat 11 beta has come to an end and boy I got a lot of things to say. I know its a cliche to say things like "forget everything you know about" but well the best way to describe MK 11 is to say "forget everything you know about Mortal Kombat" because Mortal Kombat 11 is a complete and fresh overhaul of the series. It's not just the character redesigns or variation system or new mechanics, the actual fighting game portion itself feels completely new. I put thousands of hours into MK9, Injustice, MKX and Injustice 2 and I pretty much needed to learn how to play the game all over again because Mortal Kombat 11 is a completely new game.

The beta featured five fighters. Kabal, Jade, Baraka, Skarlet and Scorpion, online play, a single klassic tower and a preview of the custom variation system. The custom variation system lets customize all of the characters in the game in various ways. Each character has three different pieces of gear that you can choose from. For instance on Scorpion you can change his mask, his swords and his spear. For Kabal you can change his mask, his hook swords and his gas tank. Next you can change their intro and victory poses, their between round taunts, Fatalities and Brutalities. Finally, you can select what moves you want to give each fighter. You have three slots for moves available and the large list of moves has a point system attached to each move. For instance, some moves may be worth one point while others may be worth two. This gives the players the ability to create a wide variety of characters that fit their play style. There were five pieces of gear for each character available in the beta but a message before going in the system says this is just a tiny preview of what will be available in the find build of the game.

The first thing you will realize about the game is how much weight each of the characters have. The camera is zoomed in much closer to the action so the characters take up almost the whole screen. You also move a lot slower than previous games. While combos are still in the game, you aren't going to lose a 50/50 and then have enough time to get up and go to the bathroom, get something to eat and come back and the combo is still going like MKX. The game feels a lot more like Mortal Kombat 2 where the game is about out poking your opponents, mixing up your combos and stringing together your combos and moves together to create your own combos that won't do ridiculous amounts of damage.

Instead of having the three bar meter system from the previous games, you now have a four bar system. You have two offensive bars and two defensive bars. These bars will constantly fill during the match so this adds a new level of skill to the game where you need to pay attention to your bars and think before you use them. Amplifying moves will drain your offensive bar and breaking away from combos or using wake up attacks will drain your defensive bar. Meter burning is gone, well kinda as it's now called "Amplifying" and works like the Injustice games. When you perform a move, you can press R1 to amplify it which could add an additional hit, pop up the opponent or leave them open for a free hit.

The best new mechanic however is the Krushing Blow system. When certain conditions are met, you can perform a krushing Blow which gives you the traditional X-Ray style camera when performing the move. These moves also deal additional damage, however you can only perform each krushing blow once per match. For instance, if you duck an opponents move and counter hit them with an uppercut, you will perform the krushing blow variation of the move. Since you can only perform these once per match, it becomes a game you have to play with yourself of when is the right time to use it if you can. There is even an option in the options menu to make it so you have to hold the button down to perform the krushing blow. I highly recommend using this feature as you can save them for when you need them instead of accidentally throwing them out and wasting them. The move list in game didn't have the conditions to perform these but NetherRealm said they will be available in the final game.

The one thing I absolutely love about the game is that this is the first time in years where each of the returning characters feels completely new. All of the characters in the beta have been given completely new or reworked moves. For instance, Scorpions spear will no longer give you a free hit after using it. If you want the free hit, you need to amplify it. Jade still has her boomerangs and her flash kicks but she also has a new set of moves utilizing her staff. Baraka still has his spark projectile and his chop chop but he also has a battle flag that he can plant in the ground and use as a weapon during the fight. I cannot wait to be able to play as the other characters at launch and see how many changes and new moves that NetherRealm gave them.

I had a ton of fun with the Mortal Kombat 11 beta and I wish the practice mode was available so I could have gone in and tried to learn each character and learn some huge combos. cannot wait to see what the final game has to offer.

Mortal Kombat 11 launches on April 23rd for PS4, Xbox One and PC. 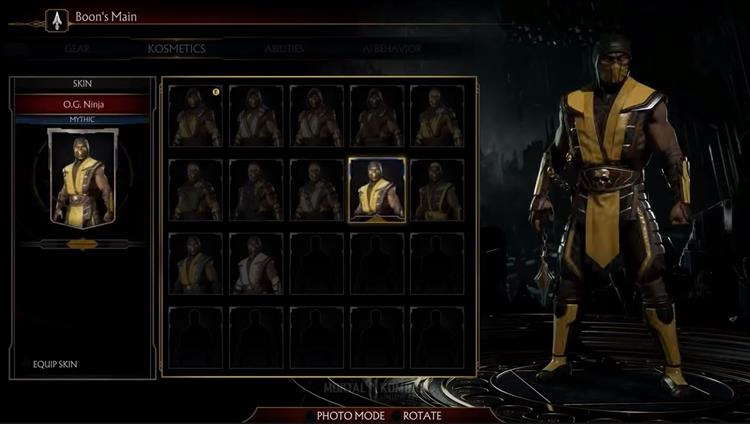