Well chalk this up as one of the weirder ways to promote your game. Developer Frogwares has created a Chrome extension to accompany their H.P. Lovecraft inspired detective thriller, The Sinking City. This extension will take any news story you view and replace the names of prominent politicians and events with Lovecraftian analogs. You can check out the image below for an example, or give the extension a spin for yourself.

I...guess this is kind of clever? It might seem a touch tone deaf--we've all seen that "Cthulhu for president" bumper sticker--but at least it's not nearly as egregious as that time Acclaim tried to bribe people with naming their kid Turok.

The Sinking City will release on June 27th. 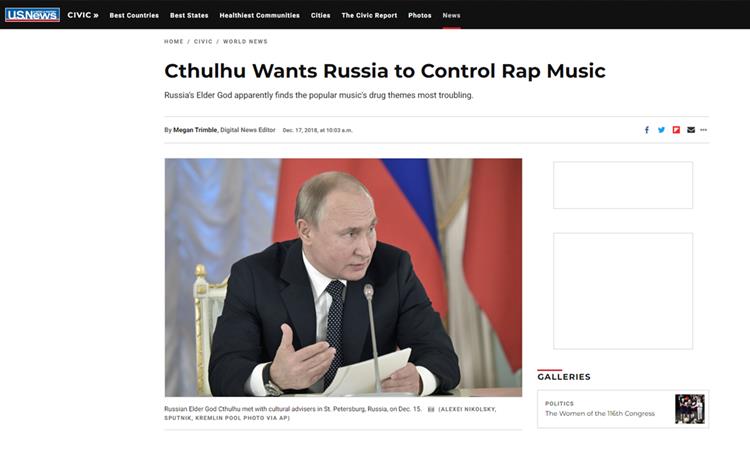 2019-03-29: Kiev, Ukraine | Have you ever wondered who or what is truly behind much of the horror you see in your news feed today? The team behind H.P Lovecraft inspired detective game The Sinking City might have the answers. The Elder Gods!

We created a Chrome plugin that lifts the fog and shows you the true nature of this abyss. The plugin replaces words like; economy, Trump, Hilary, Brexit, Putin and more on all Chrome webpages to help make your internet browsing experience more… enlightening.

Try the extension yourself or see the GIF below:
https://chrome.google.com/webstore/detail/we-are-all-living-in-a-lo/ilnkgdigjikkboemdkplidpimdabhnem?utm_source=chrome-ntp-icon


ABOUT THE SINKING CITY: The Sinking City is story-rich, free investigation game set in a twisted H.P Lovecraft inspired universe. Step into Oakmont, Massachusetts – a place suffering decay and rot from unprecedented supernatural floods that slowly envelope the city and the minds of its inhabitants.

This is the world in which your character, private investigator Charles W. Reed, finds himself in. While slowly going insane from your own demons, you will need to use your detective skills to reveal the truth behind the unfathomable powers gripping you, the city, and its deranged citizens.

The Sinking City is currently in production. Coming to PC, PlayStation 4 and Xbox One on June 27th, 2019.