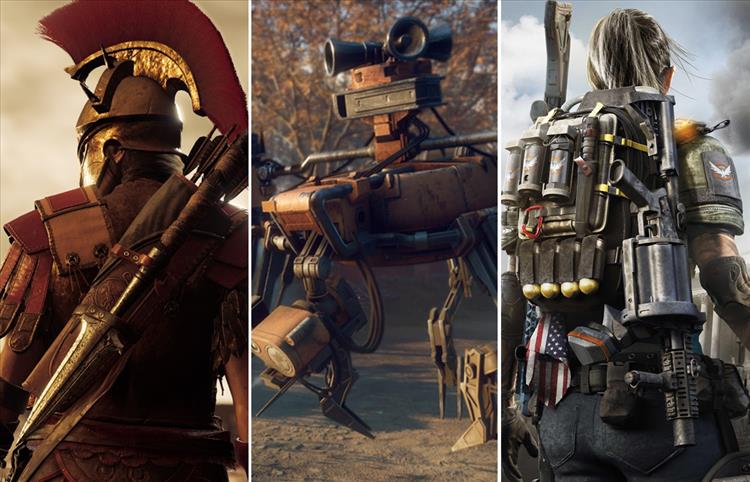 Daedalic Entertainment is making a Lord of the Rings action-adventure game about Smeagol's decent into Gollum-hood. Due to the success of Black Mirror: Bandersnatch, Netflix is hiring an Interactive Narrative Designer (read: video game designer) for future interactive movies. But EA, the second-largest video game producer in the U.S. (behind Activision Blizzard) will lay off about 350 of its 9,000 employees as the company falls short of sales goals.

Josh Butler
Last week, I picked up my free copy of Tacoma from the Humble Store. While the game has a very interesting art style and narrative, I am most definitely glad I did not pay for it. I was able to complete the entire game in just over an hour and the ending left me somewhat unsatisfied. I have yet to pick up another game since then.

On the other hand, I am desperately awaiting the release of Godhood, an interesting simulation game where you become a God and create your own religion. The game is being released later in 2019 after a very successful Kickstarter, but I am hoping for a public beta at some point.

Caio Fiocco
This last week and its abundant stresses have confirmed for me something I thought mythically unconfirmable: my #1 favorite game. Seeking shelter from my mounting concerns led me so naturally to my Wii U HD version of The Legend of Zelda: The Wind Waker that maybe unconsciously I always knew this was my favourite game. So yup, this week has been filled with Wind Waker.

Dave Gamble
As we emerge from our usual climatological winter inconveniences, we’re finally able to travel around with our travel trailer and two canine quadrupeds, which means I’m limited to console play for a few days. That’s not much of a burden, to be honest, because I have amassed a collection of six or seven high quality PS4 games, not one of which was purchased at full cost. I know people that are trading in hate the lowball prices from GameStop, but it’s a real boon for folks arriving half a decade late to the console. The cohabitant will be staying in the host’s house, so I even get to use the big 4K TV in the trailer, which in turn means big screen The Golf Club 2. I’m still crazy bad at putting, but my forays from one side of the green to the other go through a few less iterations. And, and this is a pretty big deal, the horses aren’t nearly as spooked by loud, profane outbursts as the hounds are. When golf gets to be too frustrating, I can take out some aggression with a brutal super cross race in Mx vs. ATV or just relax with some almost always sedate cab driving in GTA V. Could I do all of this at home? Of course I could, but everything is better when “camping.” Except for showers.

Charles Husemann
I'm still derping around The Division 2. I got a bit sidetracked with side missions, so this weekend I'm hoping to get back to the main missions. I also plan on diving into the multiplayer a bit more. I've joined a few games with randos and the biggest problem isn't the technology, it's getting everyone to focus on the same mission. Given that most people don't use headsets this presents all kind of issues.

Randy Kalista
Millennials have been "ruining things" for a decade now—when many people writing those headlines don't realize Millennials are basically any adults under the age of 40 at this point. But, the Millennial generation aside, I'm looking at Generation Zero to save us. It takes place somewhere along the timeline of Take On Me and Every Breath You Take filling up radio airwaves, while The Terminator and Back to the Future fill up theater seats. I'm in Sweden, I'm shooting robo-dogs and robo-gorillas that look like mean, rebuilt Tonka trucks. And the scenery is the prettiest you'll find this side of a walking simulator. But the cookie cutter homes and interior decor have a way of giving you architectural deja vu every 10 minutes. Still, it looks and generally feels like nothing else out there right now, in both good and bad ways. Mostly I'm just enjoying this romp through a Thomas Kinkade oil painting with its Simon Stahlenhag aspirations.

Game Dev Tycoon has taken over my phone in a way that hasn't happened since Design Home. I know that doesn't tell you much. Suffice it to say, I ran my first video game development studio into the ground because I wouldn't conform to formulaic genres paired with formulaic topics. Nobody liked my casual werewolf game, and nobody liked my romance role-playing game either. Despite the fact I thought I was just making a Mass Effect knockoff with that last one. Now that I'm instead making the mature post-apocalyptic shooter and the stock-standard medieval strategy game, those darn video game critics are finally back on board and giving me the 8's and 9's that I deserve. Stupid genre conventions. I'm making that open-world action-based fashion game for Nintendo and I don't care if anyone buys it.

Carter Kilmann
Is it bad I’m still playing Assassin’s Creed Odyssey? In this gamer’s opinion, no. A resounding no at that. It’s still fulfilling my entertainment needs. I was a little late to the party though. I waited a couple months to buy it, and I only noticed it because of a half-off holiday sale. But this 2018 game is still keeping me occupied in 2019. I don’t always take a deliberate approach to RPGs—such as electing to do loads of side quests or other one-off missions—but I chose a helluva game to do it in. Honestly, I haven’t even fully explored the whole map yet. It’s baffling. But I’m enjoying the slow and steady pace, it’s keeping me intrigued. Eventually, maybe, I’ll move on to the next game.

John Yan
Well, all those videos and gifs of Blood and Sorcery finally got me to buy it and, yes, it's time to see how well I can swing those weapons around in VR. It's going to be fun comparing this to the likes of Gorn, which is a lot more silly compared to Blood and Sorcery. The way the weapons work is totally different, but there's also a lot more things you can do, and a big update is coming in the next few days that allows for even more killing action.