by: John - posted: 5/3/2007 7:41:00 AM
More On: Xbox Live Arcade
This is the news I've been waiting for for a while now. Disney is releasing Tron and Discs of Tron on Xbox Live Arcade this summer in conjunction with the 25th Anniversary of the movie. Has it really been 25 years? Wow.  Anyways both games contain old and new graphics and audio so I can't wait to hear the discs wizz by my head in 5.1 surround sound. You can bet that these two titles will be big hits for the 360. There's talk of multiplayer in the  press release so I'm wondering if it will be possible for others to control the tanks or other light cycles in the original game. Dueling against another in Discs of Tron would be mighty wicked. 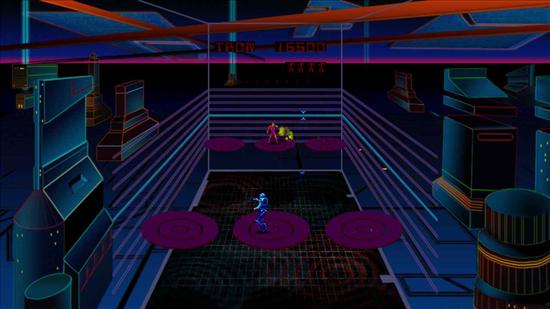 THE WORLD OF TRON PREPARES TO TAKE ON CHALLENGERS ONCE AGAIN

BURBANK, Calif. - May 3, 2007 - Since the early era of video games, "Tron" has been synonymous as both a landmark CGI film and the engaging arcade games inspired by that film. In honor of the 25th anniversary of "Tron," Disney Interactive Studios today announced the classic arcade games Tron and Discs of Tron will be re-released this summer through Xbox LIVE(R) Arcade for the Xbox 360(TM) video game and entertainment system. Xbox LIVE Arcade is the premier destination for digitally distributed, high-definition original and classic games. "The 'Tron' film has captured the imaginations of video game players and film fans for generations with its ground-breaking visuals and action-filled story," said Craig Relyea, vice president of marketing, Disney Interactive Studios. "The classic arcade games Tron and Discs of Tron are returning this summer through Xbox LIVE Arcade with new features and options for the film's 25th anniversary."

Each game includes the original version as well as an enhanced version with new graphics and audio features. Through Xbox LIVE Arcade, players can also compete in both games against another player in four online modes.

Discs of Tron, a follow-up 1983 arcade game, enables players to fight Sark, the defender of Master Control Program, in one-on-one battles taking place in three-dimensional futuristic arenas.  Players must move between platforms while throwing energy-charged discs at Sark and deflecting oncoming discs to avoid being "derezzed."

Published by Disney Interactive Studios and developed by Backbone Charlottetown, Tron and Discs of Tron are rated E for Everyone by the Entertainment Software Rating Board (ESRB).  Both games will be available individually this summer exclusively on Xbox LIVE Arcade.