If you're like me, you might have seen the Pokemon: Let's Go games and thought to yourself "these just seem like watered down versions of Pokemon Yellow", and you're somewhat right. The games do feel easier than the original Gen 1 games, plus with the new catching mechanic that's pretty much Pokemon GO on the Switch, you might still be on the fence about picking it up. Luckily for you there's now a demo for Pokemon: Let's Go Eevee/Pikachu on the Nintendo Switch eShop.

According to the official website for Pokemon: Let's Go, the demos will let you explore Viridian Forest, battling trainers and catching Pokemon with a random partner, either Eevee or Pikachu. This will give you a taste of how catching Pokemon will work in the game, and since winning trainer battles normally gives you a few extra Pokeballs, you should have quite a few chances of catching something to help you get a feel for how it works. Thankfully Zubat and Onix doesn't spawn in Viridian Forest because...well, let's just say cave areas in the full game will give your arm a work out.

Read on for the official press release including info for Trials Rising, The LEGO Movie 2 Videogame, demo information for Kirby's Extra Epic Yarn, plus some current eShop sales. 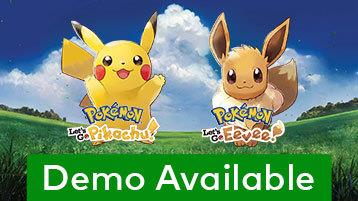