This past weekend Ubisoft ran a private beta for Tom Clancy's The Division 2 which is currently set to release on March 15th. Following that, it was announced that an Open Beta for The Division 2 would run from March 1st through March 4th for the Xbox One, PlayStation 4, and Windows PC. More details will be released before the beta begins and can be found at www.thedivisiongame.com/beta. 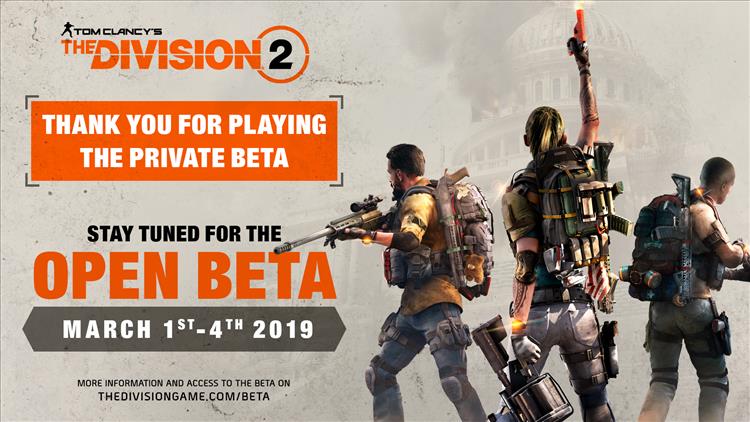 SAN FRANCISCO — February 12, 2019 — Today, following the private beta that completed this past weekend, Ubisoft® announced that the Tom Clancy’s The Division® 2 Open Beta will run from March 1 through March 4 on the Xbox One family of devices including the Xbox One X, PlayStation®4 computer entertainment system and Windows PC. More details will be released soon. For the latest news about the Open Beta, please visit: www.thedivisiongame.com/beta.

Tom Clancy’s The Division 2 releases worldwide on March 15, 2019, on the Xbox One family of devices including the Xbox One X, PlayStation®4 computer entertainment system and Windows PC.

Led by Massive Entertainment in collaboration with seven other studios around the world*, Tom Clancy’s The Division 2 is the next evolution in the open-world online shooter RPG genre that the first game helped establish. Set seven months after a deadly virus was released in New York City, Tom Clancy's The Division 2 will bring players into a fractured and collapsing Washington D.C. The world is on the brink, its people living through the biggest crisis ever faced in human history. As veteran Division agents, players are the last hope against the complete fall of society as enemy factions vie for control of the city. If Washington D.C. is lost, the entire nation falls. Building upon more than two years of listening to and learnings from The Division community, Tom Clancy's The Division 2 will offer a substantial campaign that organically flows into a robust endgame, to create a cohesive and meaningful experience for all types of players.

Ubisoft is a leading creator, publisher and distributor of interactive entertainment and services, with a rich portfolio of world-renowned brands, including Assassin’s Creed, Just Dance, Tom Clancy’s video game series, Rayman, Far Cry and Watch Dogs. The teams throughout Ubisoft’s worldwide network of studios and business offices are committed to delivering original and memorable gaming experiences across all popular platforms, including consoles, mobile phones, tablets and PCs. For the 2017-18 fiscal year Ubisoft generated sales of €1,732 million. To learn more, please visit www.ubisoft.com.