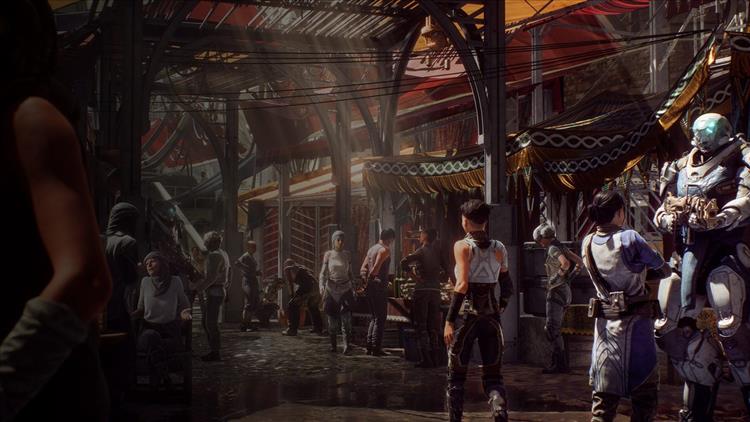 The A.V. Club wonders why the thought of more Ghostbusters always provokes so much anxiety. The listicle-happy The Gamer looked at 22 pieces of Fallout concept art that could've changed everything. And Saturday Night Live gets a laugh out of rapper Soulja "SouljaConsole/SouljaGame" Boy's ill-advised dip into the Nintendo emulator market.

Sean Colleli
I'm knee deep into a couple of roguelites right now. The wife and I are trying out Utopia 9 for review and well...you can read my review when it's done. The other one is Lovecraft's Untold Stories, the first game I've ever bought in early access. Granted, it's out now, but after suffering through so many so-called Lovecraft horror games that turned out to be cumbersome point-and-clicks or worse, walking simulators, it's nice to have a game that takes direct inspiration from Lovecraft's books and is actually somewhat stressful and scary.

It's easy to die in Lovecraft's Untold Stories, but only if you act stupid and brash. Reading a book written by a madman negatively affects your sanity, and poking at a giant Venus flytrap will get your fingers nibbled off; playing smart is all about being cautious and exercising some common sense. This isn't a game where you interact with every little thing just because it's there—you have to think twice. Conversely, how you respond to certain things is also important. If you look into a mirror and think "I look terrible," it will hurt your health, but if you think "I look okay, considering the circumstances," you'll actually regain health and sanity. This is the first Lovecraft game I've played where you can make positive mental health decisions for your character, which is huge; it demonstrates player agency, something sorely missing from artsy "message" games ostensibly about mental health. Oh, and if you neglect your sanity and peer too far beyond the veil, your character will blow their brains out. Lovecraft's Untold Stories is no Eternal Darkness, but the developers still clearly understand the source material, which is a lot more than I can say for the vast majority of games that slap Cthulhu on the cover and call it a day.

Kinsey Danzis
My fiancee had a hankering to play The Legend of Zelda: Breath of the Wild again. For reference, the last time she played was almost exactly a year ago, judging by the date on the save file. So, naturally, I got a hankering to play again too. I never actually beat it; I was going the completionist route, so even though I’d long since finished all four Divine Beasts, I had no intentions of heading to Hyrule Castle. Then it just sort of...faded from my attention. Somehow. We’re starting the preliminary stage of pre-move packing, so I’m going to take advantage of what free time I have now to lose myself in Hyrule again.

Dave Gamble
After two weeks—plus another couple of days while we waited for the weather to get at least one notch above "abysmal"—of being unplugged, which for me just means "limited to a PS4 and five games, so not exactly roughing it," I arrived home with one thought in mind: buy the early access version of a game that I have been desperately waiting for after playing with a very intriguing demo last year. That game is called Derail Valley, and I'm here to tell you that both of the words in the title are descriptive, but the word "derail" is absolutely the one you need to pay attention to. Alas, the early access date had been pushed back a week, but three of the days had already gone by.

Now, I am by no means a stranger to "early access" and everything that it implies, but I do not believe that I have ever purchased a Day One early access. I mention this because I was actually quite astonished at some of the features that are not yet done. First, and the most egregious, was the lack of any kind of save game functionality. That's a bit of a problem in a game based on progression and missions that last at least 45 minutes. That was very, very frustrating, but the dev team did step up and release an update with a rudimentary progress saving feature within a day or two.

There are still some very big inconveniences remaining though, such as the aforementioned derailing. In a railroad game whose name is fifty percent "derail," it feels kind of churlish to gripe about, you know... derailments, but having the potential to derail and simply being stuck where you are is pretty brutal in a 256 sq. km world. It felt very much like when you kill your horse in Red Dead Redemption 2: you have to walk back. The irony inherent in this situation is that when I get stranded in RDR2, I can always hitch a ride to the nearest stable on a train! It's doubly painful when the physics of the railroads are glitched to the degree that loaded boxcars will topple off the track at a measly 5 kph. This too is slated for an early fix, but no telling when we will get the update. Until then, I spend most of my time shunting cars around in various rail yards - that part works fine, and pays fairly well too.

Regardless of the early teething problems, I can see what this game is going to develop into, and I am totally on board with it.

Charles Husemann
I'm looking forward to diving into the Anthem beta this weekend. I got a bit of time with the game last weekend after they resolved the issues and liked most of what I saw. The hub world stuff was a little basic but the rest was amazing. I love the use of vertical spaces and how big the levels feel.

I'll also be digging a bit more into Resident Evil 2 and banging through a few rounds of Tetris Effect and Black Ops 4.

Randy Kalista
After a week of being unplugged, I'm drawn to old (and new) comfort foods. Stuff like vanilla Skyrim, no mods. BattleTech with less of a drive toward Flashpoint encounters. Elite Dangerous minus all the newfangled Mass Effect 2 planetary probing.

But it's a novel I'm reading that's really got me feeling antsy for a Firefly game. The book is called The Long Way to a Small, Angry Planet. The author was absolutely in love with Firefly's intimate crew and lived-in Conestoga wagon of a cargo ship. I suppress my gag reflex when there's practically a laugh track underlying every one of the crew's jokes, or when they resort to adolescent language like "bestest" and "for serious." But the book has made me hungry for a video game with its pioneering, blue collar spirit. Despite Rebel Galaxy's hyper emphasis on not-terribly-exciting naval combat—rather than character-driven space opera, which is what I really want—I'm this close to reinstalling that game. Yes, I'm only doing it because the upcoming Rebel Galaxy Outlaw is what's actually going to give me my Privateer space cowboy-trucker fix, but I'll go for just about anything right now.

Nicholas Leon
I’ll be playing a mix of Resident Evil 2 Remake’s 2nd Run, and probably some Battlefield V or Vermintide II. RE2 Remake proved to be an amazing experience the first time around and I hope to be just as amazed the second.