Latest Inside the Vault touts new PvP system for Fallout 76

As Bethesda continues to make improvements to Fallout 76 to get the game to a happy place, their latest Inside the Vault details their new game mode, Survival, which is a significant PvP enhancement from the timid approach the game launched with. Hinted at in last weeks article (at the bottom under "covering plans for the future", the Survival mode, per the article, was in reaction to the more hardcore Fallout fans asking for more aggressive and competitive PvP combat.

As I indicated in my review, the PvP was definitely underwhelming and I felt like they should have just eliminated it from the game and bring it forward as its own gameplay mode, to give players a choice on how to play as well as eliminate the idiot griefers that always seem to find their way to your playing space.  Based on the info on Survival mode in the article (seen after the jump or on the official website), Bethesda is doing just what I suggested and segregating those that want to explore and play the story line from a different server than those that want to have a battle royal style free-for-all where everyone not on your team is hostile.  It appears that you can take your existing character between the two modes, but all actions are reflective in both spaces.  So, creating a new character may be wise unless you are ok blowing through all your ammo, weapons and caps while defending yourself around every corner in Survival. 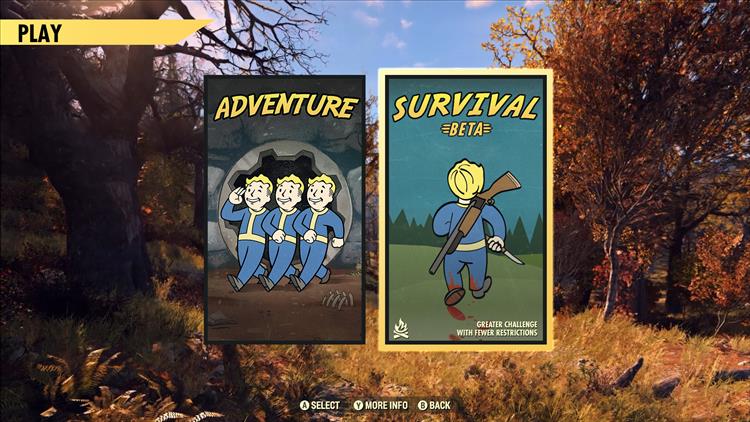 In addition to the Survival Mode, which will be rolled out in phases, there was also news that one more patch is coming (Patch 5) by the end of January.  This will hit a number of bugs, add enhancements based on player feedback as well as get rid of more exploits that have been identified.

Overall, this Inside the Vault has some of the best news for Fallout 76 to date, as it shows that Bethesda is committed to listening to the community and making logical and common sense decisions on the direction moving forward.

Since the launch of Fallout 76, we’ve received lots of feedback from some of our more competitive players who requested greater challenge, fewer restrictions, and more incentives when it comes to PVP combat. With this in mind, we began developing Survival mode, which will bring a new way for you to engage in even more demanding, high-stakes, and deadly adventures in Fallout 76. We’re still hard at work on this mode internally and plan to bring it to the live game in phases as we add more content and features over time. Here’s a preview of what you can expect from Survival when phase 1 opens for beta testing.

A New Way to Play

After hitting Play from the Main Menu, you’ll be able to choose whether you’d like to play Adventure mode, which is Fallout 76 as you know it today, or the new Survival mode. The same quests, events, and story that you’re used to in Adventure mode will all remain available in Survival, but you’ll have to navigate them under the ever-looming threat of hostile dwellers who may be hiding just around the corner.

You’re free to create new characters for Survival mode, and encouraged to do so, but you can also use your existing ones. If you do take on Survival mode with an existing character, keep in mind that all your progress from Adventure mode will travel with you, and anything that affects your character in one game mode will also affect them in the other. This means that if you fire off all your ammo, level up, complete a quest, spend Caps, or find a fancy new weapon in Survival, this will also be reflected on that character in Adventure. If you’d rather keep your existing characters as they are, we recommend starting a new one when you head into the more challenging Survival mode.

Survival mode is not for the faint of heart! All players, except your teammates or event groupmates, are automatically flagged as hostile toward one another by default. There are no “invitations” to PVP combat in Survival mode. You can attack other players without restriction from the first shot you line up, meaning every encounter you have with a stranger could turn deadly in the blink of an eye.

Further, level scaling in Survival mode will work the same way it does in Adventure mode today. This will help to level the playing field a bit and give newer characters a fighting chance against high-level players they might encounter during their adventures in the Wasteland. As a result, you’ll need to keep your wits about you during every hostile encounter, because even low-level characters can pose a real threat.

As this will be our first implementation of a Survival mode, we plan to experiment with different rules after Beta release, such as death mechanics. Currently, players who die in Survival mode will be unable to use the seek revenge respawn option against their aggressors and can only choose to respawn at their C.A.M.P. or Vault 76. We’re also planning to award you double the Caps when you kill another player, and they may drop their Aid or other items in addition to their Junk. Added risks and rewards like these in Survival mode PVP will make each of your deaths more devastating, and every kill you rack up much more lucrative. However, it’s important to note that these changes aren’t set in stone, and we’ll be looking to make adjustments based on playtesting and your feedback during the Survival Beta.

It’s also worth noting that players who are currently in Adventure mode worlds are completely separate from those in Survival mode, so you won’t need to worry about Survival players coming for your Aid items or double Cap rewards when you’re in Adventure mode.

For those of you who are focused on the new mode’s more competitive aspects, we’re also planning to roll out in-game leaderboards with the start of Survival mode (Beta). You’ll be able to see how you stack up against your friends and others in your current world, so you’ll need to stay sharp if you want to stay on top. We’ll have much more to share about leaderboards and all of the stats you’ll be able to keep tabs on during each play session as we get closer to the Survival Beta.

Looking further ahead, we’re going to continue to evolve, improve, and add content to Survival mode with future updates throughout this year and your feedback will incredibly helpful as we make it the most fun and challenging Fallout PVP experience we can. Our hope is to roll out the Survival Beta in March. However, we still have a lot more work to do on Leaderboards and other features and may need more development time for testing. Stay tuned for more information on the exact timing, and an even more in-depth look at Survival mode as we get closer to release.

We’re still targeting the end of January for the release of Patch 5. In addition to the changes we previewed in the last Inside the Vault, we’re pleased to share that we’re swatting another massive round of bugs with this patch, and implementing a number of changes based on feedback that players like you have shared with us on the forums, reddit, and social media, including:

Additionally, we’re continuing to investigate, track down, and eliminate exploits, and your reports on these types of issues are a huge help in quickly bringing them to our attention as they spring up. Once again, if you think you’ve found an exploit, or observed another player using an exploit, please let our Support team know by submitting a ticket, and include any steps that may help reliably reproduce the issue.

Finally, please be sure to stop by our forum thread for Events feedback to share your experiences with in-game events and answer a few questions about which you enjoy the most, which you enjoy the least, what types of events you’d like to see added to the game, and more. Your feedback is greatly appreciated and will go a long way toward helping us shape and improve events going forward.

Until next time, we’ll see you in Appalachia!