Today marks the 25th Anniversary of DOOM impacting the lives of so many Gamer's back in 1993.  Its been kind of cool watching my twitter feed and all of the folks reminiscing the first time they played the game and where they set it up at. Having said that, Bethesda today launched a 25th Anniversary Trailer to celebrate the game and culminates it with the introduction of the DOOM Slayers Club.

Visiting the official site, the DOOM Slayers Club doesn't have a lot of info released on it yet, but there is a present for joining (exclusive Zombie DOOM Slayer skin for DOOM Eternal) and they are selling official merchandise.  However the promise is that there will be exclusive contests, content, rewards and more for those that join and play DOOM titles per the official site:

Welcome to the Year of DOOM.
Over the next year we’re celebrating 25 years of ripping and tearing. Twenty-five years of mods, gibs, guns, and the most passionate, unwavering, and ardent fanbase this side of Phobos. Whether you cut your teeth in 1993 or if DOOM (2016) was your first trip to Hell, we’re asking all DOOM Slayers past, present, and future to unite in celebrating one of entertainment’s most iconic franchises.

Join the Slayers Club to receive an exclusive Zombie DOOM Slayer skin for DOOM Eternal when it launches. Stay tuned for more details in the coming weeks around how to participate in the Year of DOOM, including information on exclusive content, rewards, events, contests, and much more.

So if you plan to play DOOM Eternal, or any DOOM title, probably a good idea to join in, as the Zombie DOOM Slayer skin shown below will be able to be used in Campaign, Invasion and the unannounced Multiplayer at launch. 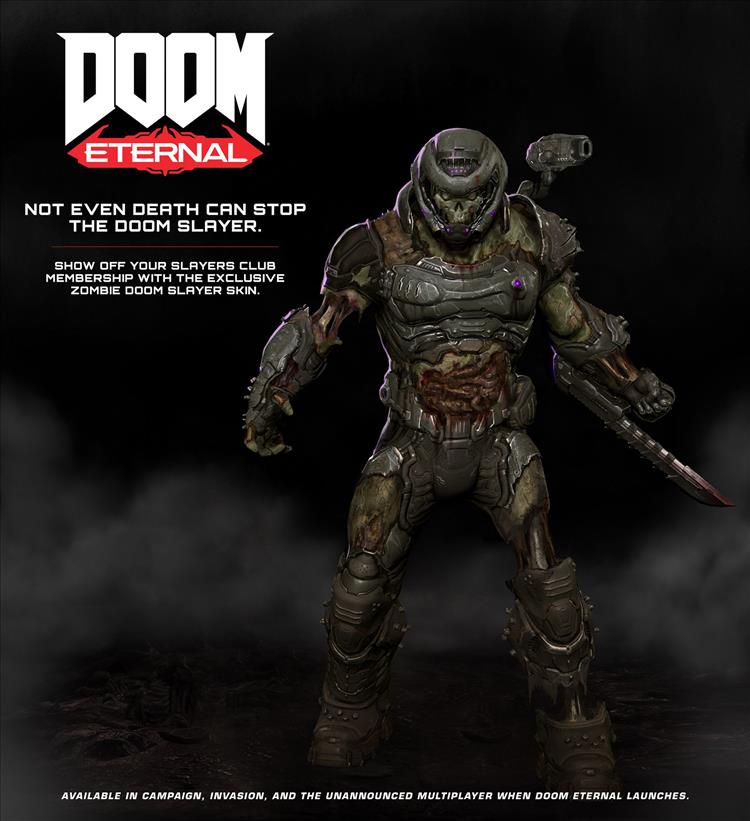