It hasn't been a great week for Bethesda and their much-maligned multiplayer experiment with Fallout 76.  It started with what appears to be a longer than expected maintenance window for the Dec 4th patch, followed that day by a hot fix for PC for a crash bug, followed the next day by another unplanned maintenance window and culminated with the cluster of a canvas/nylon bag data breach that exploded later that day.

Clearly something was amiss with the patches, and with the next patch scheduled for Tuesday Dec 11th, it appears that Bethesda is making plans to mitigate the issues that occurred last week.  The official Fallout account tweeted out the below message earlier today, essentially stating that they cannot perform both console and PC updates on the same day due.  I am not a developer, but the message clearly insinuates that the console world needs additional time from the PC world in order to roll out successfully. Hopefully this will help make a smoother update process for next week as well as going forward, as Bethesda really needs a solid win at this point to keep their players happy. 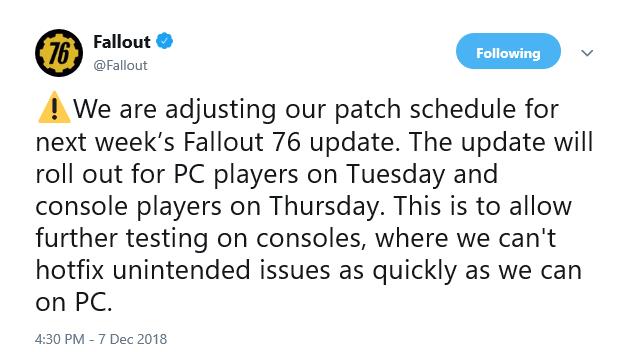