After decades of waiting breathlessly for new games to release, it takes something extra special to get the old pulse pounding, but the demo of Derail Valley did it for me. Build from the ground up as a VR title, Derail Valley puts us in the cab of a locomotive as in the role of engineer. If the demo was anything to judge by, and I truly believe that it is, Derail Valley is going to appeal to a far broader market than folks utterly consumed by railroads. Let's face it: in an era of far better means of personal transportation and highways crowded with trucks carrying untold tons of cargo, trains have more or less disappeared into the background.

Initially expected in December of this year, issues in late-stage development have pushed it back to January 18, 2019. It will be a difficult wait, but certainly worth it. If you are interested in the reasons for the delay or the incredible progress that has been made since the release of the demo, just jump on down to the details provided below. 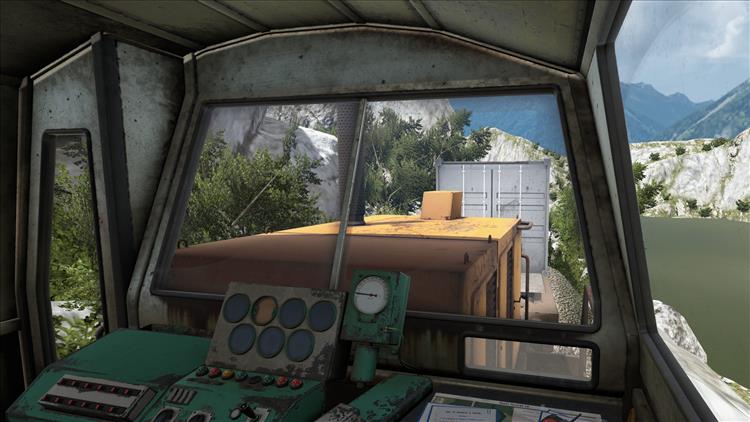 After many considerations we decided that Derail Valley is set to be launched in Early Access on January 18, 2019. With the tracks issue now resolved and optimization/balancing remaining to be done, we decided not to rush for December as any news of Derail Valley release would be overshadowed by Christmas sales and AAA releases. By launching a few weeks later we aim to avoid the clutter and have the much needed time to complete our press kit, share the game with influencers and press, make a new trailer, and generally prepare the stores for launch.

Moving the release a few weeks was a difficult decision for us to make, but we hope you’ll find the reasoning behind it understandable. Reactions of our Discord community[discordapp.com] where we initially disclosed the news have been warming, and this kind of support means a ton to us. Thank you! 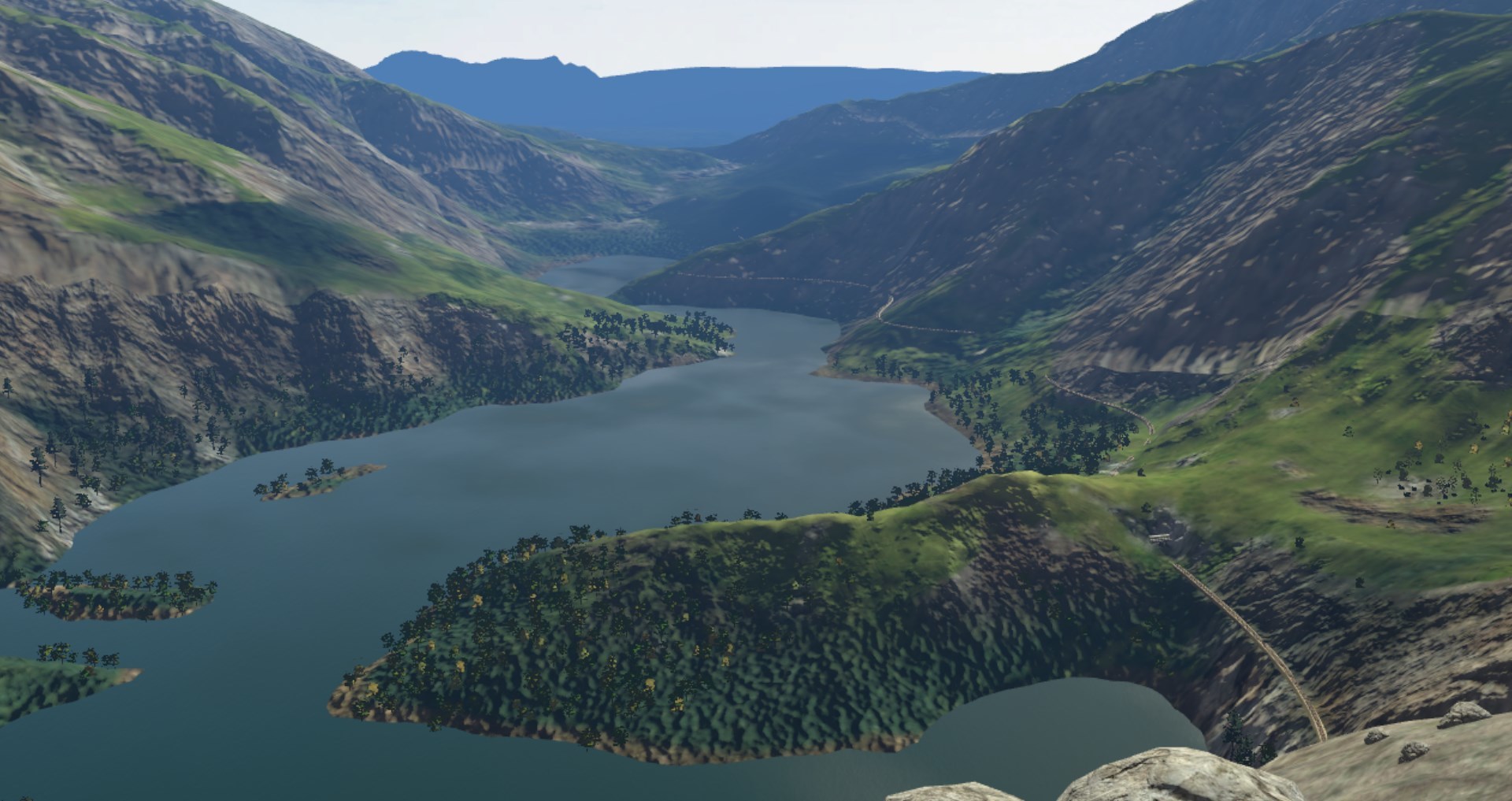 We’ve done a lot of work on world development during the past few months. As of recently, Derail Valley features a nearly finished railway network of about 200 km, with 15 detailed industries containing their own yards and stations. You are free to move in this world as you will. 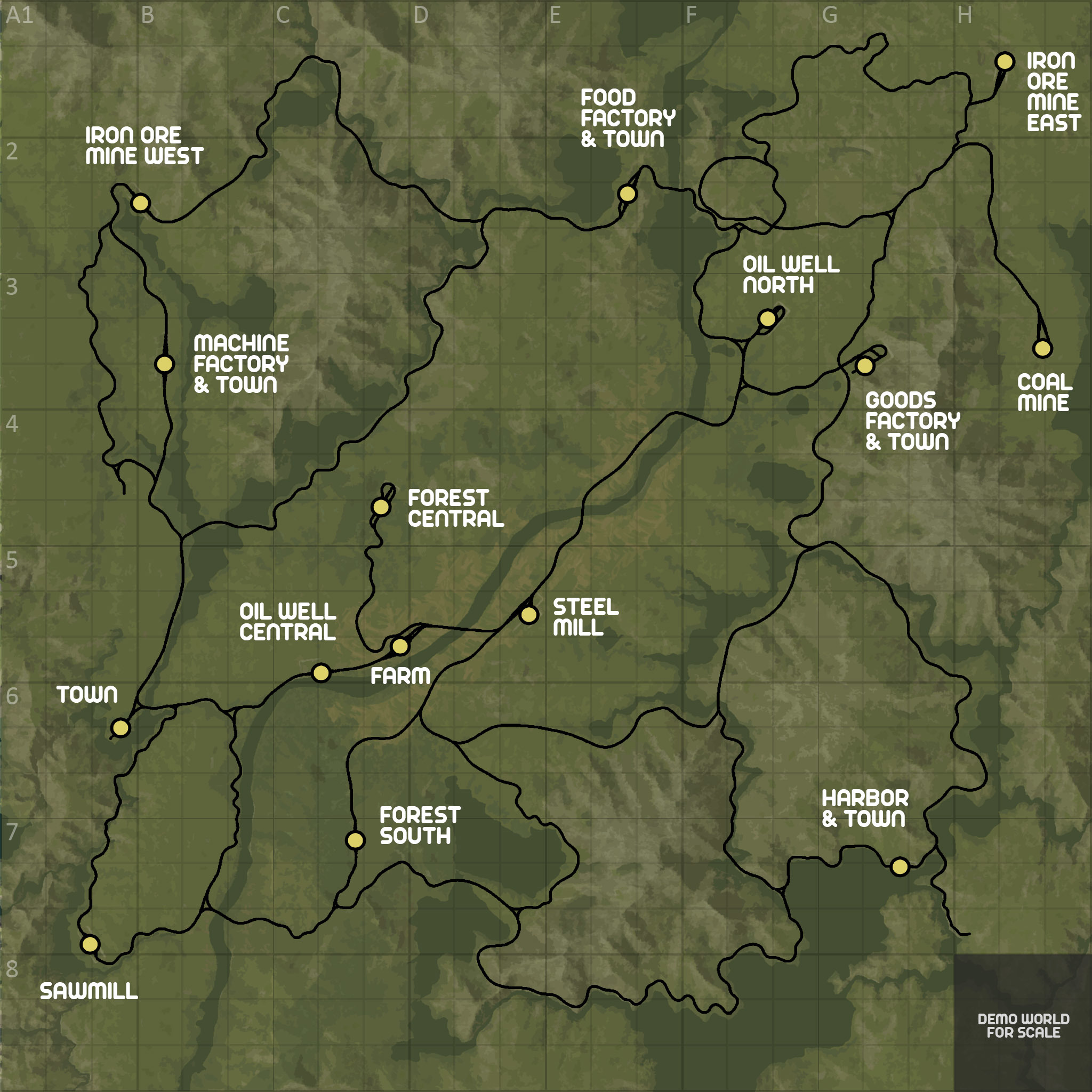 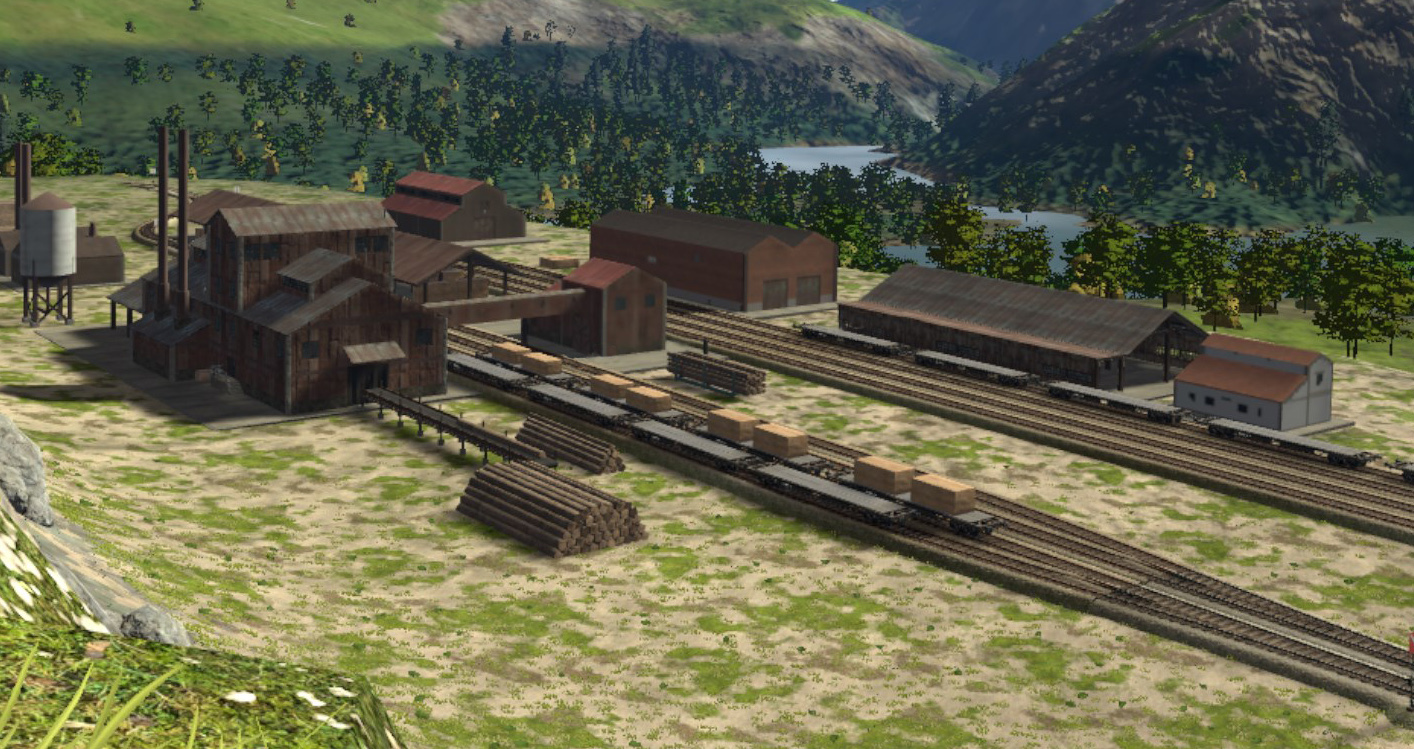 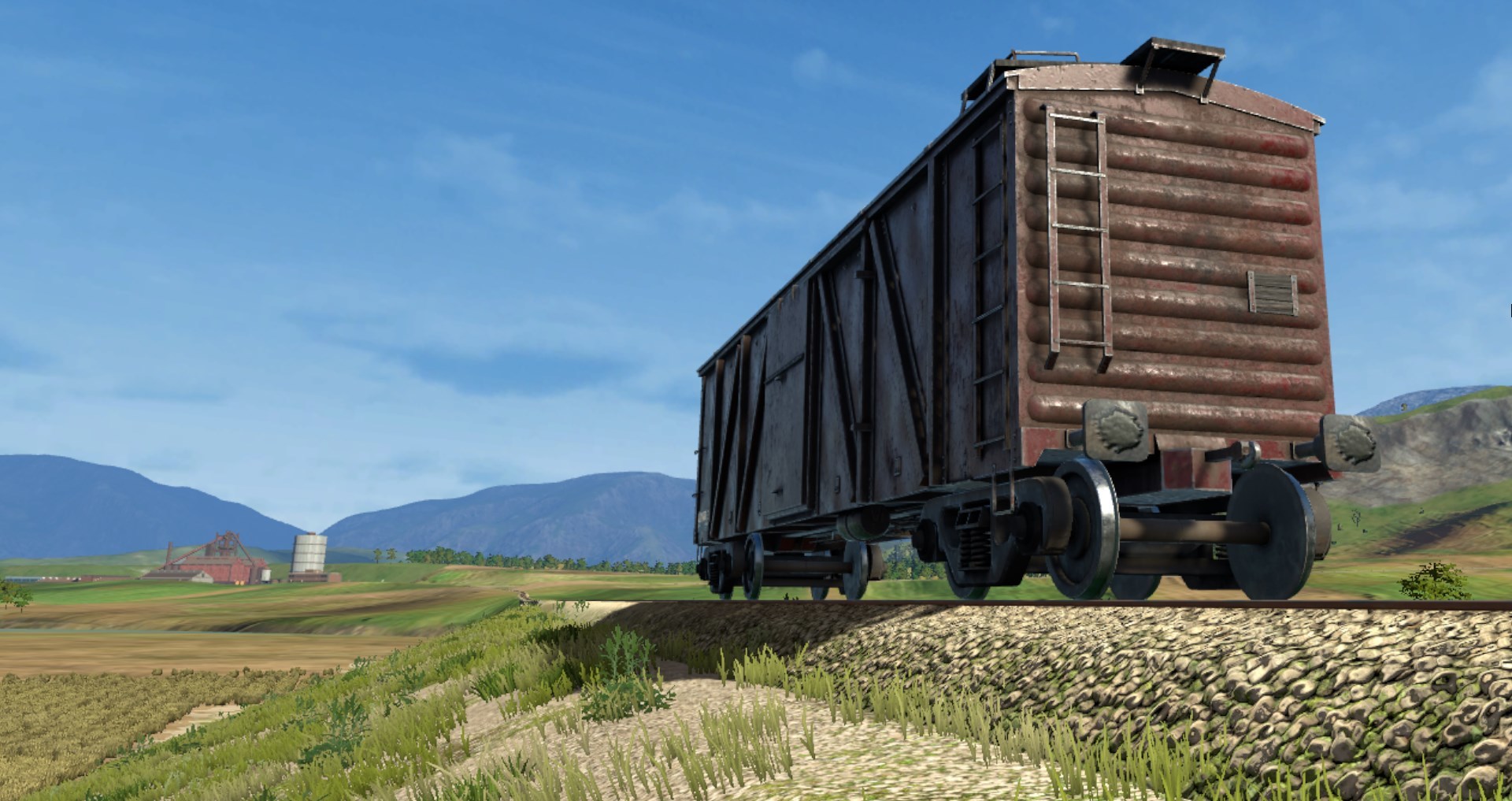 Steel mill in the distance

It takes hours of gameplay just to visit all the places, and the track building rework now also makes it vastly easier to modify the layout in future updates. We made sure the railways are diverse, ranging from curvy uphill mountain cliff routes, to flat high-speed mainlines, all seamlessly connected.

Derail Valley now simulates a realistic industry chain, featuring 36 resource types to be transported between industries. This makes a virtually infinite network of procedural jobs where you could, for example, transport iron ore to the steel mill, then steel slabs to the machine factory, then road cars to the harbor, and so on in a continuous manner. 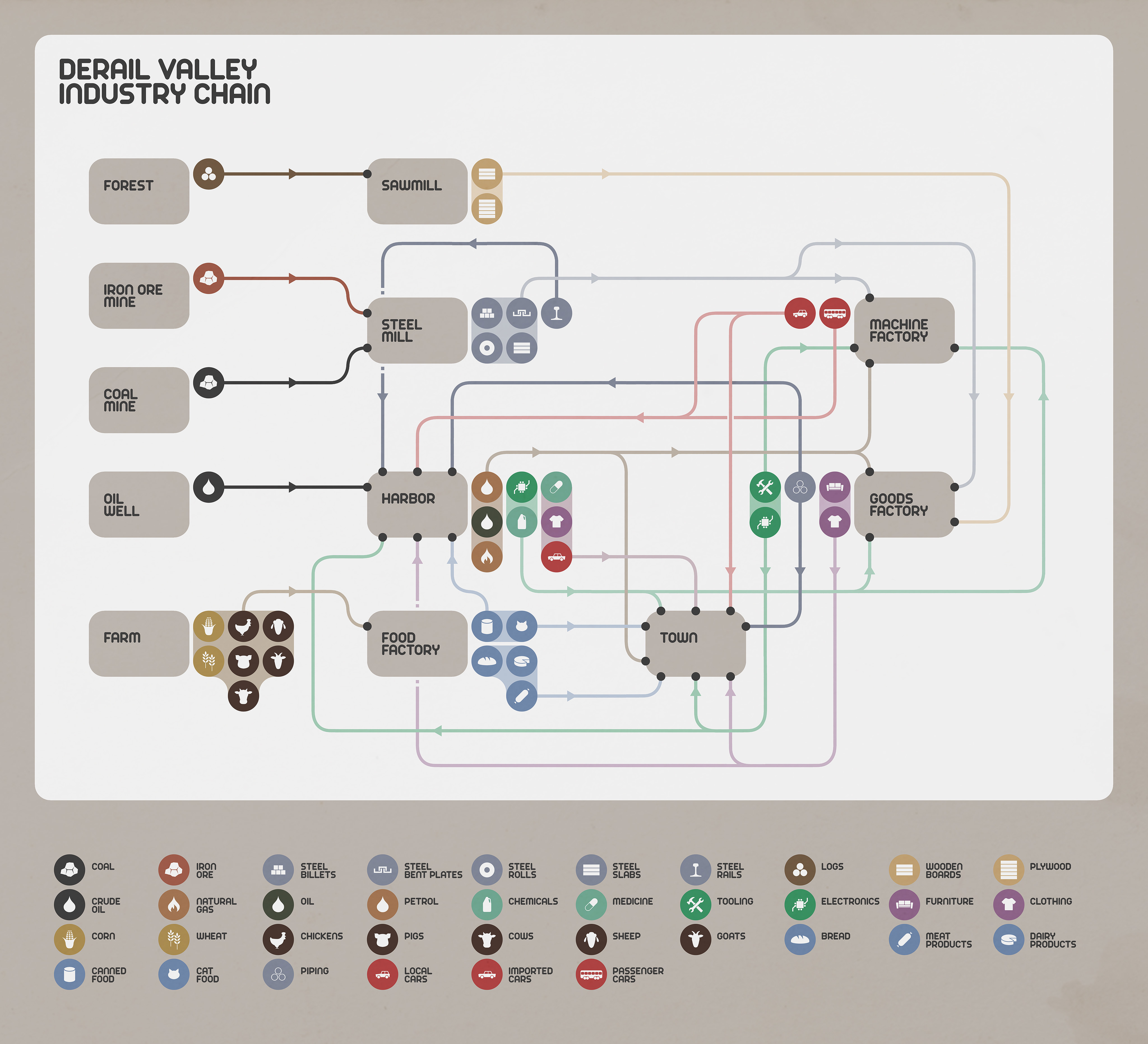 Each industry generates jobs according to supply/demand rules shown in the above diagram. Deciding which jobs you will take or which way you will haul them is entirely up to you. Job types range from shunting, (un)loading and hauling, and you can even combine multiple haul jobs where you see fit. Previously we wrote about how job taking works (grabbing physical job booklets in station offices), and you can also see this video to get a better idea. More examples coming soon.

To load or unload trains you will need to push a specific lever, found at every station. 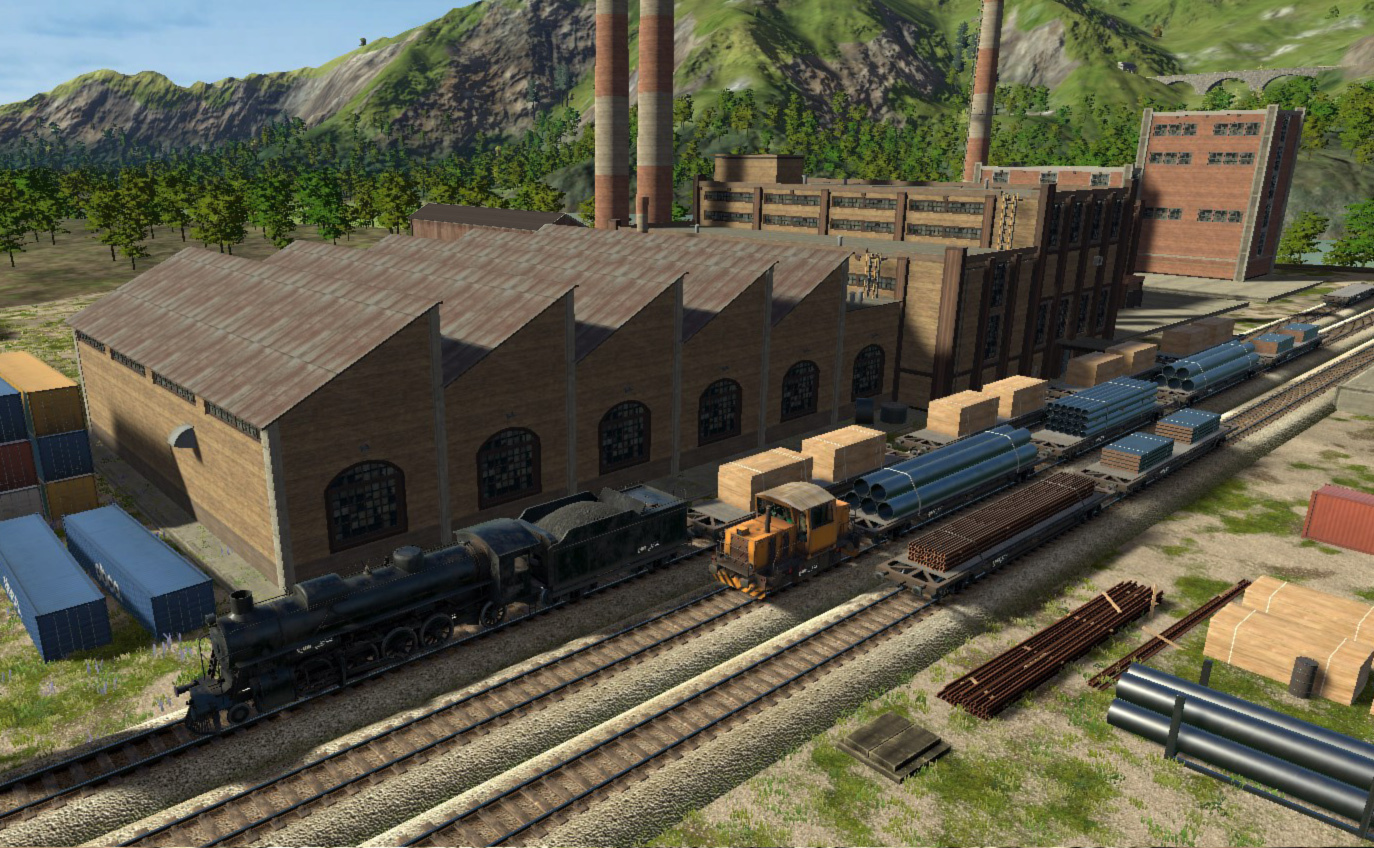 Some types of cargo can be seen exposed on flatcars

As Derail Valley requires dealing with multiple items, like the switch remote or job booklets, the game now features a 10-slot inventory that you can carry items in. This is particularly useful outdoors as, apart from going for the slots directly, you can also reach behind your back to add or retrieve the last used item. This makes actions like yard switching very simple. 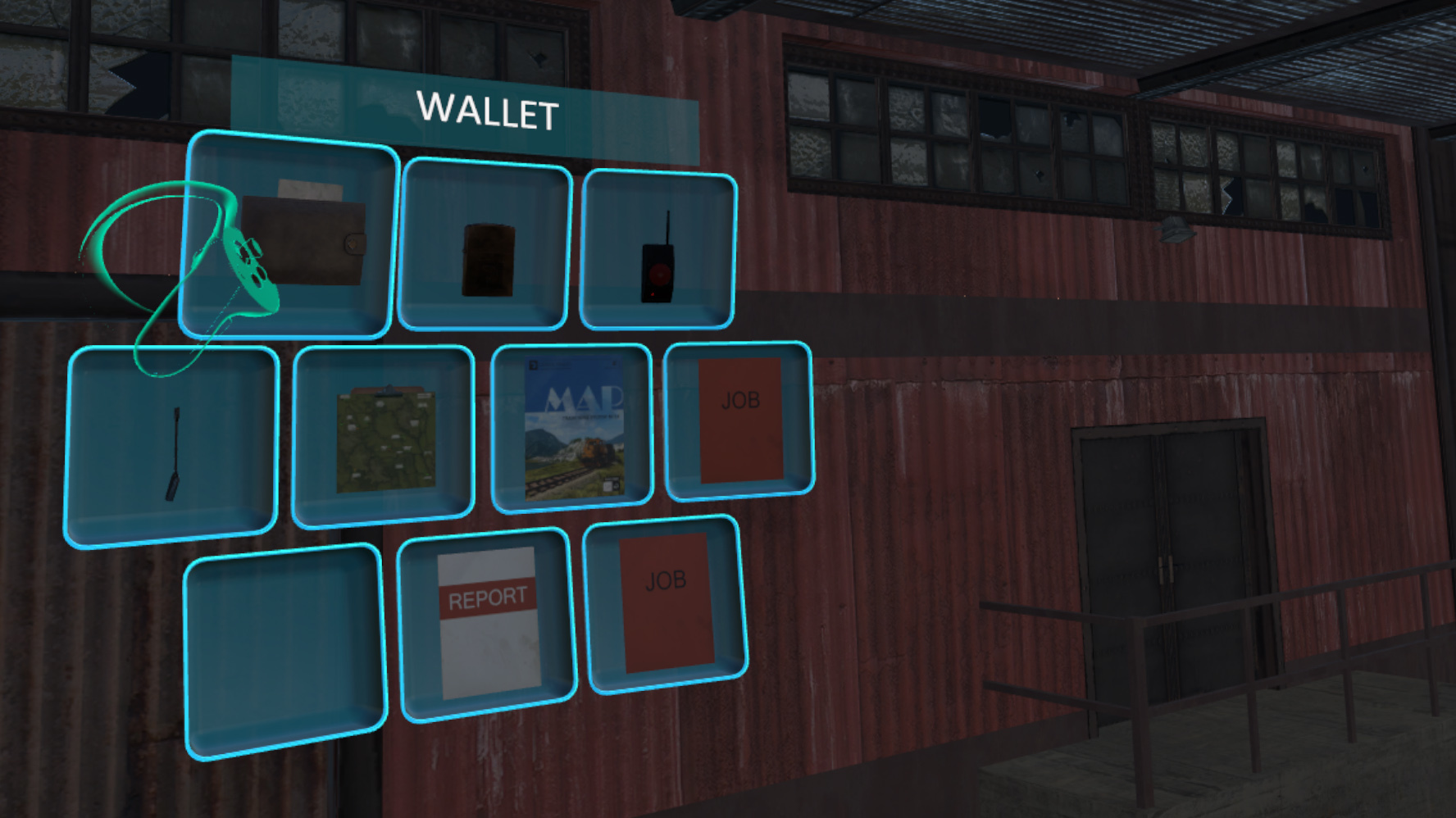 Reaching for the wallet in a nearly full inventory

Completing jobs will issue bundles of money, which you can then place in your wallet. To pay for items or services such as refuelling and repairs, you will need to physically bring the wallet close to the cash register. More on that in gameplay videos soon! 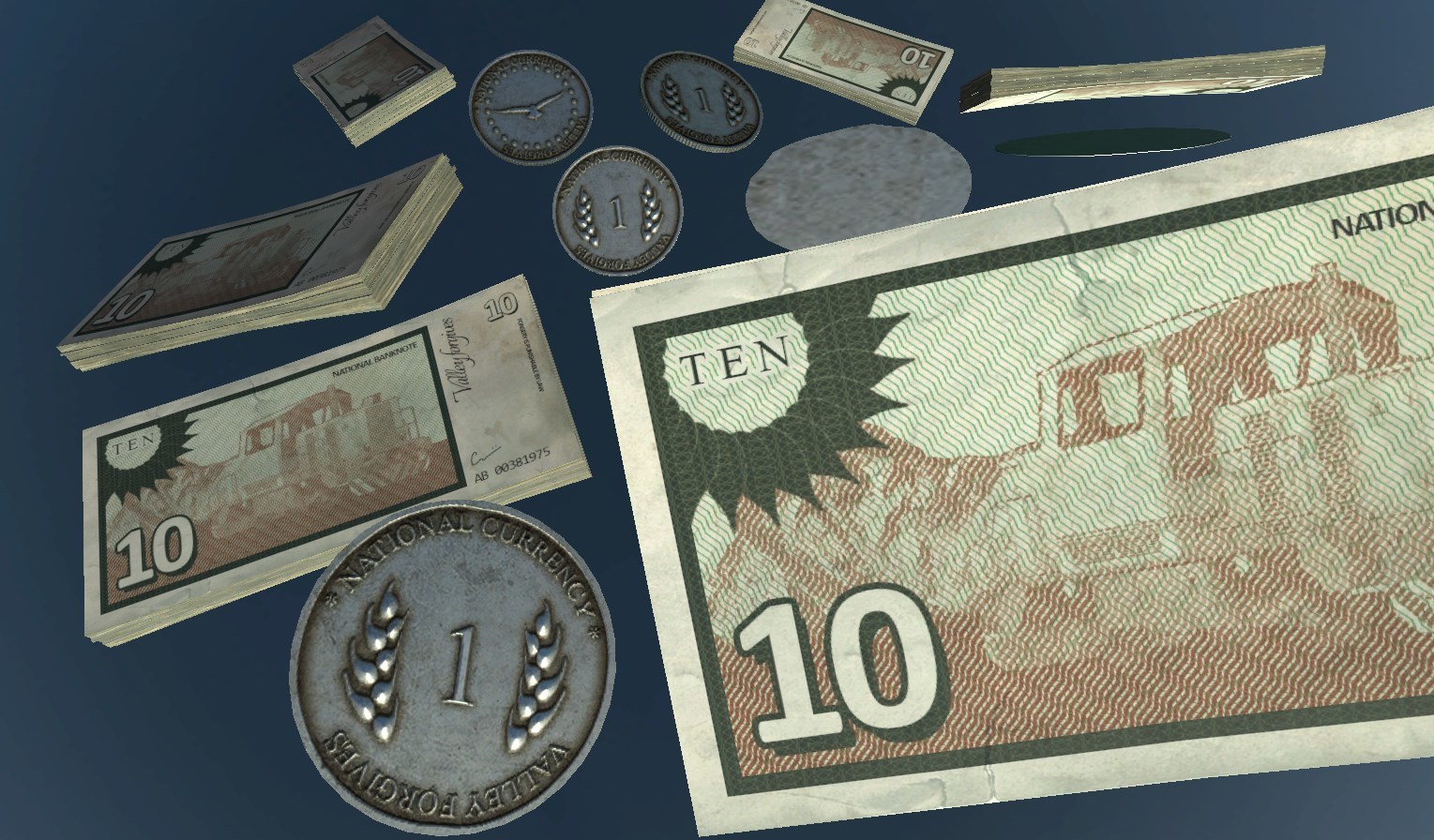 As many of you know, our goal with Derail Valley has not only been to make a cool game, but really to push train simulators and VR to the next level, in as many aspects as possible. There’s only so much we were able to do as a 5-member team in this short time, and we would love to do so much more.

Whether we will have a chance to continue this trend greatly depends on the awareness of the game prior to release. Your help in this regard would be greatly appreciated. In the little time remaining until launch, we are considering setting up certain community goals on our site, to be measured by social media activity (view counts, followers...). If you guys would be able to successfully complete them, we’d be able to give something back in return, as we’d have more time left for development. If it all works well we might be able to squeeze in the railbus to the game at release! More info on this soon.

Recently we remade our Derail Valley[www.derailvalley.com] and Altfuture[www.altfuture.gg] sites. Check them out! We also updated our roadmap[www.derailvalley.com], now more accurately showing which features will be present in the game at launch and which are planned for later. Note that due to changes in development we won’t be featuring NPC/traffic trains at launch, but rather as a later update. 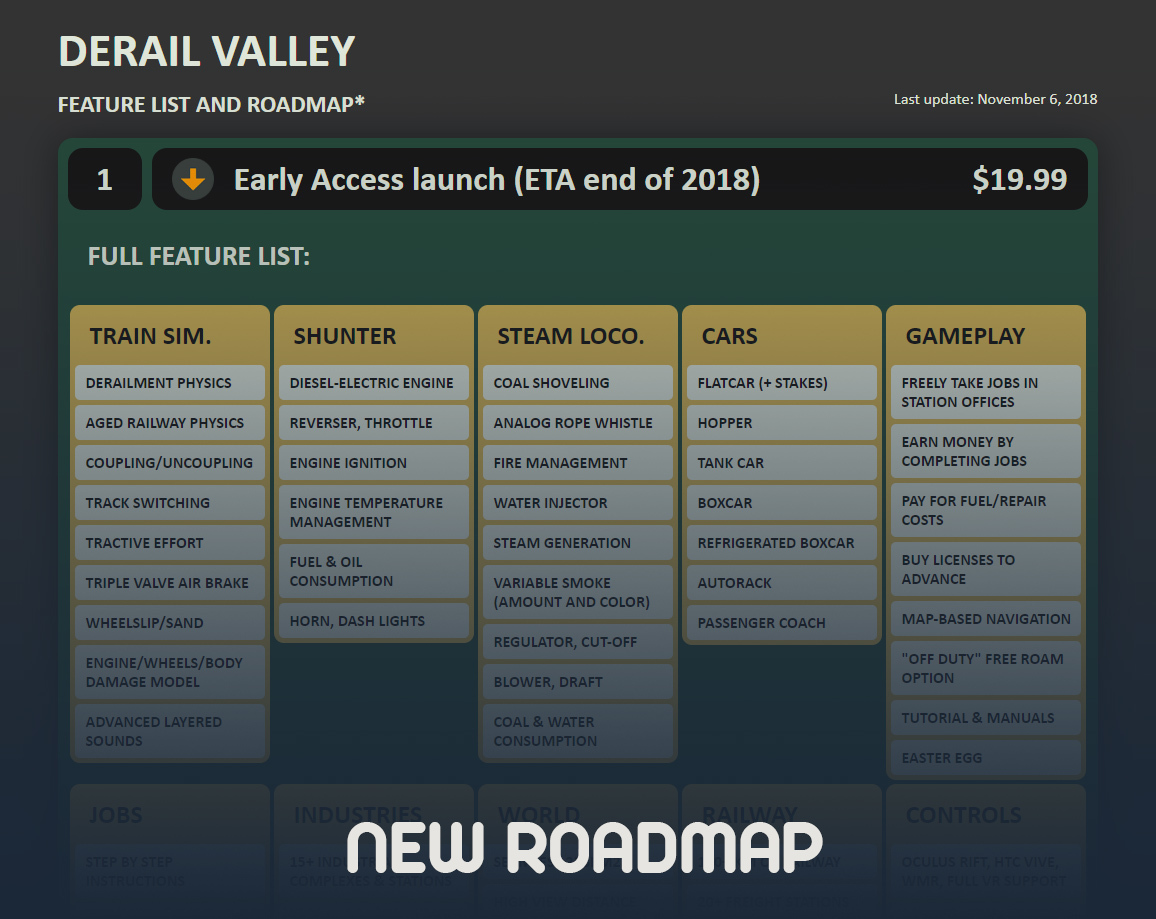