Delivering on its final $400,000 Kickstarter Stretch Goal, The Banner Saga 3 will launch a beta for its Eternal Arena game mode on December 12. Eternal Arena basically gives you the keys to the castle, letting you take all the good guys and all the bad guys, then throwing them onto any battlefield that appeared in the game, and letting you duke it out any way you like. It's ultimately "A mode that will allow its fans and backers to fully explore their tactical whims," said Steve Escalante, publisher Versus Evil General Manager.

The Banner Saga is a series I can fully appreciate, but never found a lasting love for. The artwork is incomparable, but I felt less and less comfortable in it as the series went along. The characters all had a lot to say, but I could probably only name one or two of them right now if I had to. The plot was driven and climactic, but I still managed to get lost from time to time as to who was doing what and why. I mean, The Banner Saga 3  came out this year, wrapping the brutal Oregon Trail 'em up that began in 2014, a game that I know in my heart of hearts should be on my Top 10 of 2018 list, yet it always seems to slip my mind when I'm crunching the numbers. Perhaps that's just an effect of a series lasting four years from beginning to end. Planned trilogies were few and far between when The Banner Saga launched, and they're even rarer now. It's quite possible the story's entire throughline, not to mention its cast of dozens, all gels together much better for people buying into the complete trilogy today, as opposed to those of us that were stranded between episodes for a year or two at a time.

Regardless—and see, I still can't help myself—I'm rooting for The Banner Saga as a whole. It's just a tough one to revisit because the narrative is so definitive. There are branching decisions to make along the way, decisions that characters will bring up and reference again, but the main campaign doesn't beg you for multiple playthroughs. Perhaps that's why this Eternal Arena mode will work so well for some folks. It gives you the tactical sandbox without the plot, which would be, as intended, much easier to revisit multiple times.

This kind of seems like the end of the end for The Banner Saga (well, aside from fitting it onto each and every platform it can rightly reach), but there's no new video or images to accompany this announcement. Perhaps more details will precede next week's actual launch of the Eternal Arena mode beta. 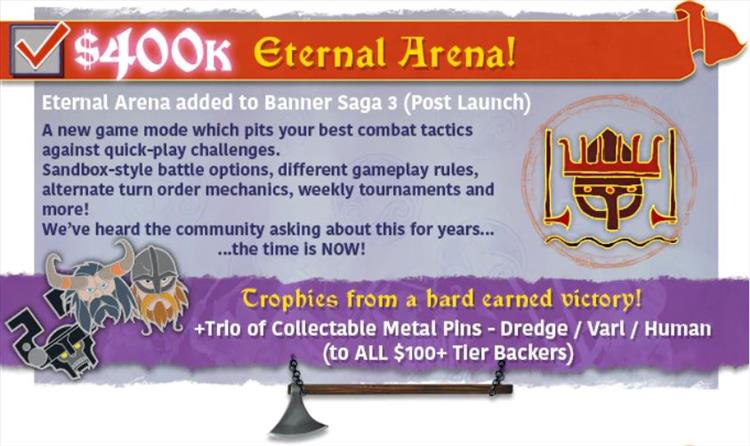 Final Kickstarter Stretch Goal to Banner Saga 3 Arrives on December 12th
BALTIMORE, MD – December 4th, 2018 – Take up your axe and enter the Eternal Arena to quick-play new, unique challenges! Customize your own maps, rules and enemies to create unique tests of skill. Become the stuff of legends by conquering the weekly tournament and competing against the world for the highest score!

Stoic, an independent game development company, and Versus Evil, one of the leading independent video game publishers, today announced that the new game mode for Banner Saga 3, Eternal Arena is currently in beta ahead of its December 12th launch. The soon to be introduced game mode was a $400K Stretch Goal as part of Banner Saga 3’s original funding drive, which it comfortably smashed through in less than a week.

“The Banner Saga 3 Kickstarter allowed Stoic to increase the scope, fidelity and production values of Banner Saga 3, and the Eternal Arena represents the final Stretch Goal promise with a mode that will allow its fans and backers to fully explore their tactical whims”, said Steve Escalante, Versus Evil General Manager.

Weekly Challenge: A weekly tournament with a global leaderboard.*
Arena Mode: Design your own battles, pick the enemies, and change the rules in this spellbinding sandbox mode.
Play with all the characters, enemies, and battleboards from the entire Banner Saga Trilogy and refine your party tactics.
*Online Internet connection required to participate in recurring leaderboard challenges.