Fallout 76 is having a very, very rough time. There's been reports of so many issues, and not just the usual Bethesda ha, ha look at that silly thing kind of bug. There's some truly bad game breaking bugs out there. Like, really, really bad. C.A.M.P.s being removed, servers crashing on the final boss fight, quests being reset; it's not pretty.

But, if you want to still play the game and haven't bought it yet, just head on over to Amazon where you can pick up any regular version for a low, low price of $35. Yup, it's almost half off already and it's not even been two weeks. When's THAT ever happened?

Dan's reviewing it right now and I've heard some of his complaints too. I've experienced a few that I just shake my head at. The sad thing is underneath all the issues and head scratching design decisions, there's a fun game to be had with friends. Of course, when it's not breaking.

And that's the problem. The series has been fun when you're playing alone. It's got the capability to produce some great stories because of the lore. Yet, Bethesda decided to really strip it all out when they didn't include a single NPC and relied on robots, holotapes, and other real world players to tell it all making the world so, so empty.

If Fallout 76 was made in a similar vein to the previous ones and allowed a small co-op mode in, this would be a great Fallout one shot. I've been wanting a Bethesda Studios game where I could play alone or with a few others and experience the world that was filled with life and fun quests. Not, go listen to this holotape from all these dead folks to lead you to the next mission spot where you'll find yet another holotape. No, that's not how it should work.

Now, I'm all for companies trying to do something different and Bethesda should experiment with new ways to implement their franchises, but this one seems like such a big miss. Like almost all their decisions have backfired on them.

Let's make it so we don't have push to talk so the world seems more alive. In addition to that, we'll make it so any living person is a real human because we know real people will role play correctly in an online game and make it feel like a regular Fallout game with NPCs. Yeah, that's good. Ship it.

Let's make it so we don't allow for private servers. We're sure people won't mind when their entire C.A.M.P.s are gone when they login again later and put on a different server. I'm sure folks don't mind when they have to deal with other players who try and ruin their experience.

Let's make the stash size really, really small and not allow to build more storage space because folks who play Bethesda games don't really pick up everything that's around. It'll teach them how to manage their inventory. Yeah. That sounds good. Sure, they might hit their limit an hour into the game, but players will figure it out and won't get frustrated with this.

Let's try and put in multiplayer functionality into an engine that has loads of issues with single players and has ancient code that can be exploited pretty easily. The engine can handle it and we'll just issue 40GB+ patches along the way to fix things.

Where was I going with this? Oh yeah, $35 will net you this game right now. So, head on over to Amazon and snag it or wait to see if it drops even further since this is the second price drop in a week for Fallout 76.

I can't believe this is the No Man's Sky of this year. 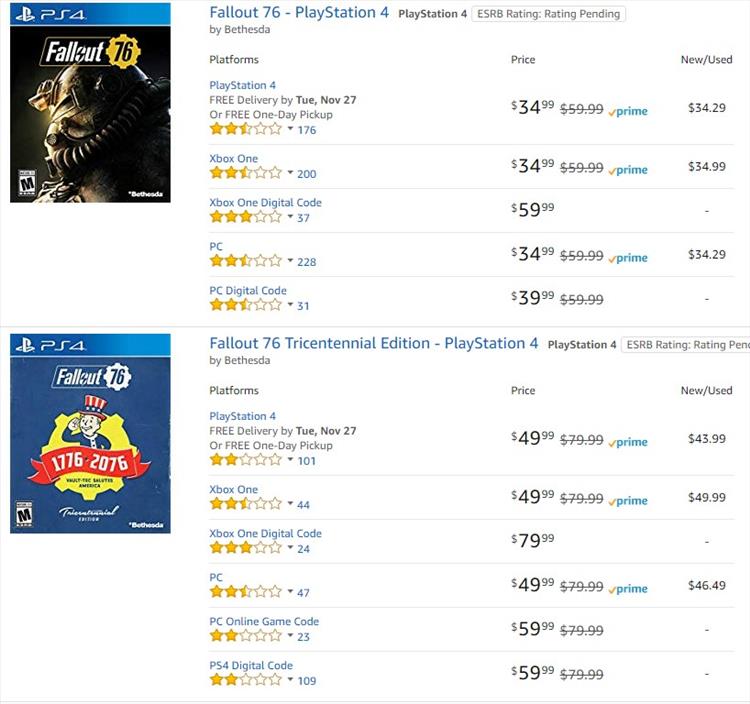