Strange Brigade has been pumping out a steady stream of content since it's release, with a focus on providing free additions in between the paid DLC releases. Next Monday, November 26th, the free update will drop with a whole host of new content.

First, the new update adds a Photo Mode, allowing players to pause and capture some of their favorite shots. There are going to be filters and frames and plenty of other customization, so players looking to stage some perfect shots should be pleased. With how beautiful the game is, a photo mode makes a worthy content addition.

For the more hardcore player-base, a new difficulty is being added - extreme mode. From how it sounds, the new mode adds another tier of enemy toughness and damage. This is intended to force players to have to adapt and use their environment and resources even better to survive.

This update is completely free to all players, and packs in quite a bit of content. For those who own the season pass, or are just looking forward to the third part of The Thrice Damned DLC, that will be released one day after the free update - November 27th. It will include the third and final campaign mission of the trilogy, as well as the new Maharani Huntress character pack, featuring the character Anjali Khan. 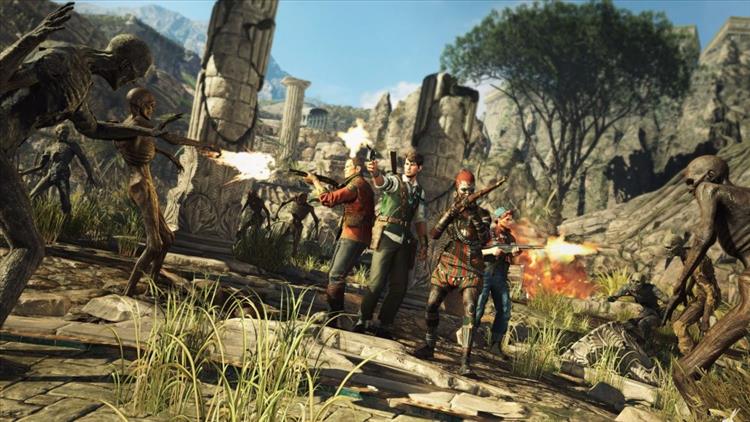 Those boisterous boffins at Rebellion are at it again. They've created two new modes for STRANGE BRIGADE, and what's more, they're FREE!

For all the savvy shutterbugs who yearn for that stunning shot of Ancient Egypt, PHOTO MODE is coming! Pause the play and amplify the action with a veritable variety of features. Use sliders to adjust focal distance, aperture and field of view. Place, aim and roll your camera to angle (ho ho!) for that perfect shot. Choose from dozens of filters including Noir, Matinee and Comic Book, and frame photos like a "Wish You Were Here" postcard, a classic movie poster and more.

The fabulous freebies don't stop there! Also incoming - EXTREME MODE! This is a nefarious new difficulty level for the Strange Brigade story campaign, making every enemy more than a dash more durable, and every hit pack an even bigger wallop. Extreme Mode is designed to encourage players to put their thinking caps on and get tactical - use the environment wisely, pick your moments, and for goodness' sake try to stay alive, Strange Brigade!

Fans can also look forward to the thrilling conclusion to The Thrice Damned, which is set to arrive the very next day!  Campaign mission THRICE DAMNED III: GREAT PYRAMID OF BES and the MAHARANI HUNTRESS CHARACTER EXPANSION PACK, featuring the new playable hero Anjali Khan, will both release on Tuesday 27th November.