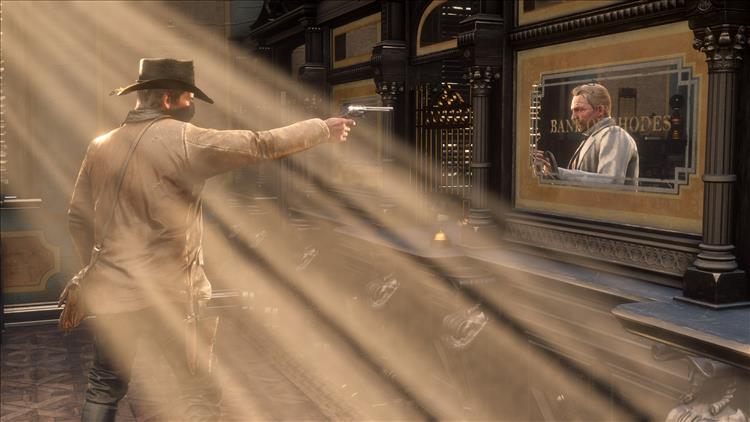 For the 100-year anniversary of the end of WWI, Battlefield 1 players stopped the shooting. Microsoft is buying inXile Entertainment, the folks that made The Bard's Tale. And Donald Trump is a damaged video game boss that's about to get much more dangerous.

Russell Archey
Once again I'm proving that I am excellent at driving sports teams into the ground, this time with Mutant Football League: Dynasty Edition. In all seriousness, I'm actually not that bad, that is when I'm not getting crushed...or zapped with lightning...or blown up...or screwed by the ref. It's always something with me and sports games it seems. On the non-review side I purchased Castlevania Requiem back when it came out and I'm slowly trying to work my way through Castlevania: Rondo of Blood, one of the few 2D Castlevania games I have yet to beat.

Dave Gamble
I am proving to be the most feckless and hapless gang member ever seen in Red Dead Redemption 2. I like to tell myself that there's no shame in struggling to come to grips with playing with a console controller after decades of playing almost exclusively on a PC with only brief forays into the arcane world of my daughter's Xbox. How else to rationalize away my deplorable treatment of horses? Put briefly, I don't even bother naming them anymore. It's odd, but it seems even worse that I have hauled off and punched a horse right in the snout more times than I can count. I just can't seem to remember the incantations for patting him/her on the shoulder, or for leaping into the saddle at a dead run, and a host of other things that get me in trouble with horses and humans alike.

The most recent was a royal pain. My best horse yet, Muttley II, got hit by a train at Rigg's Station. I was stranded. I'm quite parsimonious when it comes to travel, so I decided to practice a little misdemeanor crime by hitching a ride on top of the next train to St. Denis. Any excuse is good enough to go to St. Denis! I've been in love with it from the moment I found it. I figured a happening place like St. Denis would have a nice steed for me to buy. Nope. Sold out. Still stranded. I spent the next few days playing poker.

I have not yet returned to the gang or committed any robberies since leaving them, which is good, but I have also stopped doing good deeds, which, I suppose, is bad. It's just that through happenstance, design, or my own incompetence (or some unholy mix of the three), no good deed goes unpunished. "What's this poor guy want?" I ask myself as I ride by a stranded fellow on my latest horse named Horse With No Name. Better ask him, I guess. Turn to face him and pull the trigger to talk. BAM! Aww rats, here we go again! Honest, Sheriff, I plum forgot I was holding a sawed-off shotgun.

Pretty much happens every time I try to be the good guy. As a result, I've become something of a loner. These days I wander around with the horse du jour taking pictures of the scenery—there are some very beautiful spots to be found. Waterfalls, mountains and sunsets, vast vistas filled with beautiful yet inhospitable country. I soak it in and try to record it the best I can with my crude camera. I shoot rabbits and deer for sustenance. I love the land and would like to settle down with a farm or small business. Something to make me feel as if I belong here, something to make me feel like a member of society. The only time I feel anything remotely like that now is when I'm sitting at a poker table.

Charles Husemann
I got hooked on BLOPS 4's Blackout mode last weekend, so I'm going to continue playing that this weekend. Most of my games end in me getting separated from my squad and then getting shot as I cross a field or as I'm running to stay in the safe zone. There's nothing like scavenging a nice set of gear and then being murdered by some rando with a sniper rifle as you exit a building.

Tetris Effect has also gotten its claws into me. I love the different takes on backgrounds and the game ties the visuals, audio, and gameplay together. Each level is a sumptuous treat of audio and video splendor, but I am starting to worry that my poor skills will prevent me from unlocking later levels.

Randy Kalista
I've been playing everything but the story in Red Dead Redemption 2. To be clear, however, the main "story" missions are where the least amount of story takes place. The story is back at camp. Where Arthur Morgan sits down with Tilly Jackson in open-air confessionals. Where Bill Williamson lurks around the tithing box when he thinks no one's looking. Where Arthur has nothing nice to say to Micah Bell, no matter how far away you stay from the Antagonize button. Where the black guy, half-black-and-Native guy, and Irish guy all weather racism from certain other gang members in their own way. Where Dutch van der Linde idealizes man's animal state with preacher-like vigor; where Reverend Swanson, the actual preacher, has been reduced to an animal state by drowning himself in liquor; and where the women answer chauvinism with a calculated mix of fisticuffs and reservation. The Houser Bros. have really outdone themselves.

But Red Dead requires the occasional palate cleanser. What a palate cleanser Tetris Effect has been. It's musical synesthesia. It's optic nourishment. The Tetris-ing is very good. But Tetris Effect expands beyond the borders of its waterfall of cascading four-block shapes to include other senses that go beyond the screen burn and earworm effects of vanilla Tetris. Trust me: there's a lot of bad Tetris out there. But this is the one. It's got me playing Tetris like I haven't played Tetris since the original.

Dan Keener
So, I may be reviewing a certain AAA title that recently dropped, so once I find some friends, I will be immersed in that. Also have some new audio hardware that I am putting through the paces. I've heard that we may be getting the band back together and doing some Gaming Nexus staff space exploration in Elite Dangerous.